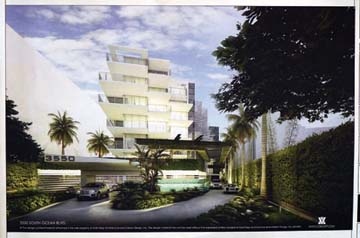 over a parking garage on the site of the Palm Beach Oceanfront Inn.

After a false start last winter, Paragon Acquisition Group is moving forward with plans to build condominiums on the site of the Palm Beach Oceanfront Inn.
This time, however, Paragon isn’t proposing a project that requires changes in South Palm Beach’s height limitations.
At an Aug. 25 meeting of the town’s Architectural Review Board, Paragon unveiled a scaled-back — and scaled-down — version of the design it showed residents in February. Instead of 36 condos, the developer presented the town a plan for 33, and instead of an eight-story building, Paragon is proposing six stories over a parking garage.
The changes put the project in compliance with the town’s building rules, and the review board unanimously approved the plans on a 3-0 vote.
“We’re heading in the right direction now,” said Councilwoman Stella Jordan, one of the town’s most vocal advocates for height restrictions. “It’s a very good design, and the changes were necessary.”
With an approved site plan, Paragon can begin applying for the permits needed to start construction. However, several council members said they were skeptical about work on the property beginning any time soon.
Vice Mayor Joseph Flagello says the revised design moves the building a couple feet farther to the east, which may complicate getting the federal and state permits necessary to build the seawall.
Flagello also questions how serious the Delray Beach-based developer is about doing the building itself. “They certainly could sell the property to someone else now that they have an approved plan,” he said. “That wouldn’t be surprising.”
In February, Paragon CEO Gary Cohen asked the Town Council to put a referendum on the August primary ballot that would change the town’s charter and land development regulations to allow an eight-story structure where the old Hawaiian hotel now stands at 3550 S. Ocean Blvd.
The council unanimously rejected Cohen’s proposal, and told the developer to work with residents to come up with a plan they would accept. Cohen bought the property for $8.25 million in November 2012 and has repeatedly said its future is not as a hotel and restaurant, the town’s only business and a nonconforming commercial use.
Before Cohen arrived, the previous owner, Pjeter Paloka and Kosova Realty, proposed building a 14-story condo project, an idea that touched off a backlash among residents which ultimately led to voters approving new height limits in 2010.
Paragon’s revised design, by Kobi Karp Architecture and Interior Design of Miami, features a saw-tooth layout with staggered floors. To satisfy parking requirements, the plan calls for using mechanical lifts to stack cars in the garage.
In other business, Leanne Welch, Palm Beach County’s environmental program supervisor, told the Town Council on Aug. 26 that preliminary work on a plan to help prevent erosion of the town’s shoreline is running behind schedule.
Welch said an Environmental Impact Statement that was supposed to be ready early next year might not be ready until May or June. Until the Army Corps of Engineers completes the EIS, the plan to install buried groins along the beach can’t go forward.
“It is frustrating,” said Councilwoman Bonnie Fischer, the town’s liaison on the $5 million project, “but I guess it’s expected.”
Welch said the plan still calls for the town paying 20 percent of the cost, the county 30 percent and the state 50 percent. About 75,000 cubic yards of sand would be used with the groins to help stabilize the shoreline