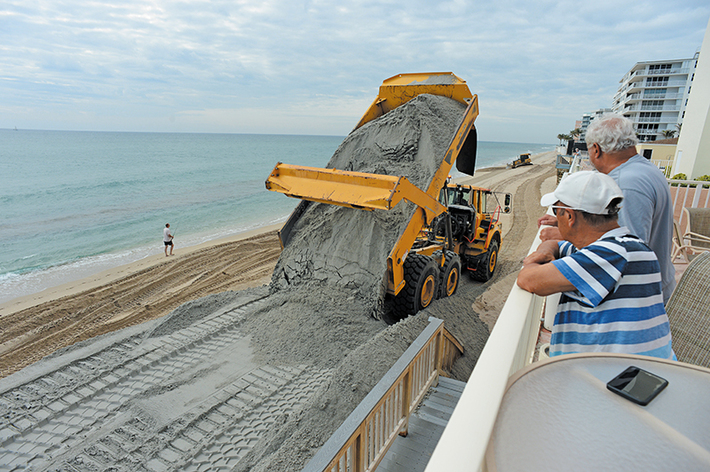 Palmsea condo residents Carmine (foreground) and Bob Scalia watch a dump truck and bulldozer work on a project that calls for delivery of up to 1,000 truckloads of sand to the dune line of South Palm Beach. As the project progressed in the cousins’ backyard on April 21, Carmine said, ‘I hope this is a once-in-a-lifetime event for us.’ Jerry Lower/The Coastal Star

Hundreds of truckloads of dredged sand arrived from Palm Beach in April, bolstering South Palm Beach’s dune line and buffering condo buildings from the relentless seas.
For Mayor Bonnie Fischer, it has been an often excruciating and frustrating journey that at times seemed impossible to complete.
Fischer has spent more than 10 years pushing the project. She attended dozens of meetings and environmental conferences, made hundreds of phone calls and twisted more arms than an army of chiropractors to get the work done.
But the most important thing she did was make a friend — former Palm Beach Mayor Gail Coniglio.
“An engineer told us, ‘If it wasn’t for the relationship between their mayor and your mayor, all this would never have happened,’” Fischer says. “That touched my heart.”
Coniglio and her council allowed South Palm Beach to purchase as many as 1,000 truckloads of sand that Palm Beach dredged as part of the town’s extensive beach renourishment project.
And when things got tough, Coniglio was unwavering in her support for her southern neighbors. Two years ago, Palm Beach County abruptly pulled out of a project to install groins on the South Palm beaches, citing rising costs and objections from communities to the south.
Conigilio stepped in to offer South Palm Beach a piece of her project. It will cost the town somewhere between $700,000 and $900,000, money that has been saved in reserves for years to repair the beach.
Fischer is the first to admit it’s not a perfect solution. One strong storm could wash away much of the work.

“The groins would have been a better option,” the mayor says. “I was really disappointed that didn’t happen. But we had two options left — do this, or do nothing.”
Finding some sort of strategy to deal with the eroding beachfront became an inescapable issue in South Palm Beach in 2005 when Hurricane Wilma tore through Florida.
By the time the hurricane left Palm Beach County, South Palm Beach’s coastline was devastated and several condo buildings had nothing but battered seawalls to stand up to the relentless waves.
It took more than 10 years to actually develop the groin plan with the county and win the approval of state regulators. The original cost for deploying the network of a half-dozen concrete sand holders on South Palm’s beaches was estimated at $5 million. The state was to pay half, the county 30% and South Palm 20%.
By 2019, however, that price tag ballooned to something closer to $10 million and the county abruptly pulled out of the project. It didn’t help that both Manalapan and the Eau Palm Beach Resort & Spa threatened to sue over allegations the groins would steal sand destined for their beaches.
The Town of Palm Beach offered its alternative a few months later — a much more modest plan but one that was clearly more practical. Rather than a beach stabilization project, Palm Beach offered a dune restoration project, with sand and sea oats restoring what nature had eroded away.
It’s not a small paradox that South Palm wound up getting more help from Palm Beach than its own residents. Despite years of trying by Fischer and three city managers, South Palm Beach never did get all the easements it needed from condo associations and homeowners to work on the beach. They, too, lawyered up, expressing worries about damage liability and opening access to the public.
In the end, Palm Beach gained access to haul in the dredged sand on its side of the border line between the two towns.
Fischer said that the contributions of Robert Weber, Palm Beach’s coastal program manager, were invaluable. Weber effectively became South Palm’s project manager and saw the work through.
After five terms in office, Coniglio decided not to run for re-election in March. Fischer said she’s grateful Coniglio stayed long enough to help her friends in South Palm Beach.