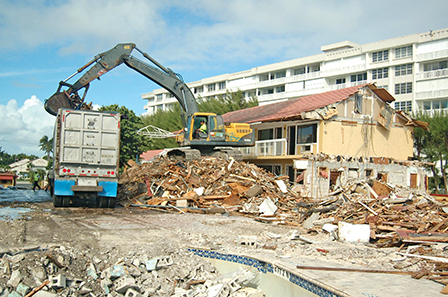 The developer has begun a limited demolition of the Oceanfront Inn in South Palm Beach.

Developer Gary Cohen has all the permits in place to tear down the Oceanfront Inn in South Palm Beach, but afterward the fate of the prime piece of property remains anything but certain.
Cohen began a limited demolition of the hotel in October and plans to start reconstructing the sea wall soon. But Mayor Bonnie Fischer says the town knows little more than that.
“We don’t have a timetable for when it will be torn down,” she said. “But he (Cohen) has all the permits he needs to do it. He doesn’t talk to us about his plans.”
Since the spring, Cohen’s Paragon Acquisition Group has been advertising the property with HFF commercial real estate brokers in Miami. The ad calls it “the last remaining ocean development opportunity on the island” and makes the point that the town has approved his development plan to build a 33-unit condominium building with six stories over a parking garage.
“I’ve thought from the start that they were going to flip the property,” said Vice Mayor Joseph Flagello. “If that’s what they want to do, then good, flip it.”
Councilman Woodrow Gorbach, a real estate agent, said residents had figured out some time ago that Cohen was probably a dealer and not a builder. He bought the hotel, known to locals as the Hawaiian, for $8.25 million in 2013.
“Rumors have been floating around the town that the owners have no intention of putting a building there,” Gorbach said, and wondered about what price the market would allow.
“I don’t think he’s going to get $20 million for it,” Gorbach said. “But I’d hate to think he won’t get $10 million for it. However, the economy just isn’t that good right now.”
A potential buyer who wanted to change Paragon’s building plan would have to get the town to approve the changes first, officials said. Fischer said getting the demolition completed is the priority for residents right now.
“Having an empty lot is better than what we have now,” the mayor said. “We’ll see what happens then.”