Mike Felice fills a trash bag with debris as Dennis Aten picks up a flip-flop on the beach. 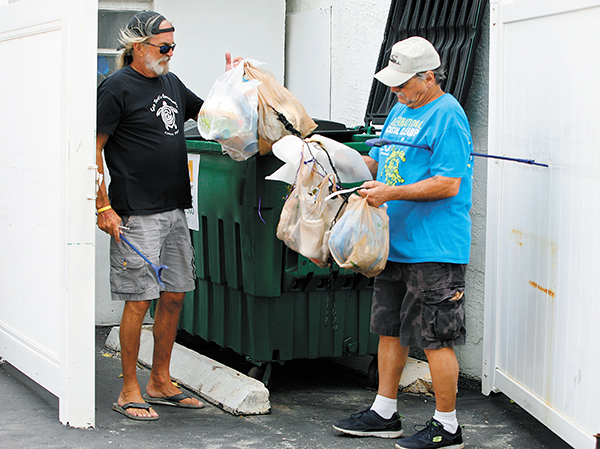 Most days produce a few bags’ worth of trash along the beach. 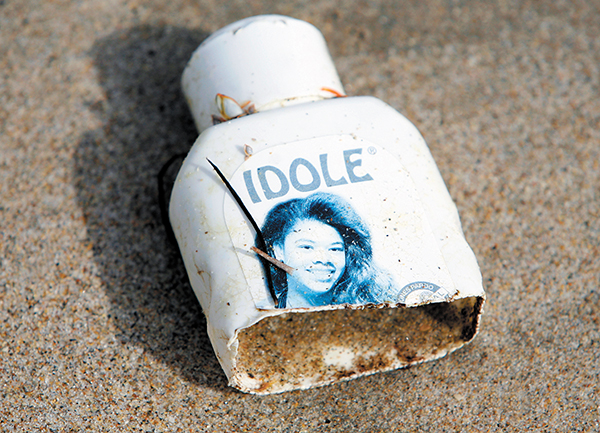 One odd finding is a plastic bottle cut in half.

Oh, those early morning walks on the beach. Is there any better way to greet a day?
That cool, silver sand between your toes. Salty breeze stirring the dune grass. Golden sun twinkling off the ocean’s foam.
The shampoo bottles, the candy wrappers, the hypodermic needles.
“You wouldn’t believe how much crap there is down there,” says Dennis Aten.
“Would you believe toothbrushes?” asks Mike Felice.
Aten and Felice are both 66, both retired, both friends and neighbors in the 3500 S. Ocean condo at South Palm Beach’s northern line.
You’ll meet them on your morning walk, plastic bags and EZ Reach pincer poles in hand, picking up those bottles, wrappers and hypodermic needles all the way south to the Lantana line and back. And you’ll meet them again most afternoons.
“I used to monitor the turtle nests about four years ago,” recalls Felice, a retired teacher from Toms River, N.J. “I wouldn’t stake if there was junk around, so we started picking it up.”
The waves are a roiling explosion of blinding white foam this late October morning, a rough sea churned by an angry wind that grabs at their plastic bags as Aten and Felice meander down the beach, grabbing trash from the seaweed and sand.
Let’s tag along.
“Deodorant roller,” Aten says, dropping one into his bag.
“Plastic visor,” Felice reports.
“Plastic forks,” Aten says. “There’s always a million of those.”
Scan the horizon, admire the sky, squint down the coast and South Palm Beach is one gorgeous Florida postcard. But keep your head down, scan the sand, and oh, the sights you’ll see.
“They should ban plastic straws,” Aten grumbles, pushing one into his bag.
Felice has a list of some of the trash they’ve found in the past four years. Flip-flops and lunch bags, hair clips and bands, cigarettes and cigars, fishing line and bait buckets and Styrofoam everythings. And yes, before you ask, condoms. But only one sex toy in four years.
“We found a Crown Royal whisky bottle with a note in it once,” Aten says, “but the note was so wet you couldn’t read it. All I could make out was N.C. for North Carolina.”
All trash and no treasures, unless you count the bottle caps.
“On a good day, you’ll get 100 to 150 bottle caps,” Aten says, so when the pair spotted a Coastal Star profile of Timothy Annis, an Ocean Ridge resident who recycles bottle caps to buy wheelchairs for veterans, they dropped off several thousand from their daily walks.
Occasionally, other beach walkers pass.
“We get a lot of funny comments,” Aten says. “One lady asked us, ‘Are you guys picking up shrimp?’” He shakes his head. “Shrimp.”
This morning he’s picking up a half bottle of Idole Skin Lightening Lotion. Not a half-full bottle, but half the bottle itself, neatly cut in two.
“We get a lot of bottles that are cut in half,” Aten says, “and I got five or six toothbrushes the other day. They’ve got to have come off a boat.”
Soda cups you understand. Candy wrappers you understand. But who leaves a tube of Colgate toothpaste at the beach? Are cruise ships dumping their trash overboard? They wonder. How does a plastic bottle get neatly cut in half down here?
One of the other regular beach walkers is Jody Field, who lives in the Beauvois, just across South Ocean Boulevard from Aten and Felice. Last year, she wrote the town manager.
“I am writing to tell you about two South Palm Beach residents that I believe should be recognized by the town. They are not employed by the town or the city of Palm Beach, they are citizens who enjoy the beach and are concerned for its welfare,” Field wrote.
On April 28, 2015, Mayor Bonnie Fischer presented Aten and Felice with Certificates of Appreciation:
“The town of South Palm Beach extends its gratitude to you for the time and efforts you so unselfishly donate to clean our beach. Thank you for your efforts to Keep South Palm Beach beautiful.”
The official accolades are nice, the men agree, but praise was not their motivation. They do it for the exercise, the companionship, the turtles and the beach.
“I’ll do this as long as I can walk,” Felice says. “It’s good exercise.”
“Until I can’t,” Aten agrees, and his reach pole makes a grab at the sand.
“Glow stick,” he murmurs. “Always a lot of glow sticks.”