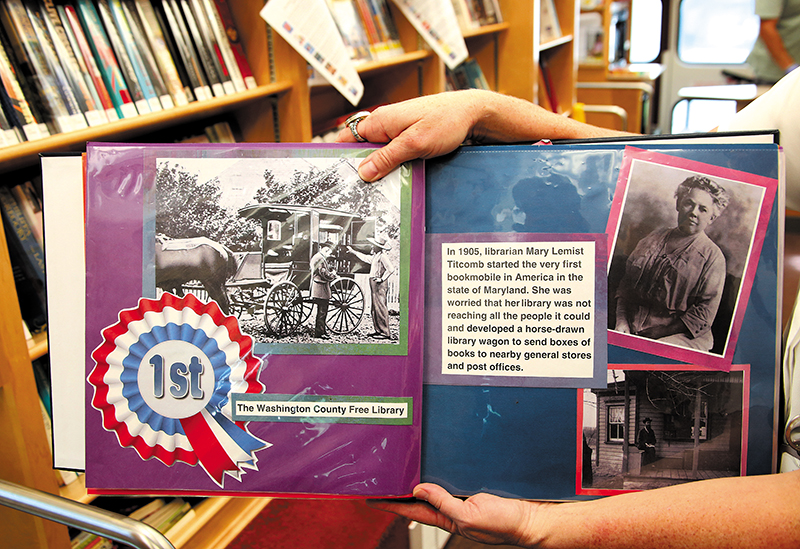 The county bookmobile has a scrapbook that shows the first bookmobile in America, in 1905. Tim Stepien/The Coastal Star

If you ever visit a bookmobile, spare a moment to remember the woman who first inspired them. Her name was Mary Lemist Titcomb, and in 1905 she was the head librarian at the Washington County Free Library in Hagerstown, Maryland.
“Would not a library wagon, the outward and visible signs of the service for which the library stood, do much more in cementing friendship?” Titcomb once said. “No better method has ever been devised for reaching the dweller in the country. The book goes to the man, not waiting for the man to come to the book.”
At her urging, the library’s trustees got Andrew Carnegie to give them $2,500, and America’s first “library wagon” hit the road.
Its 2,560 books were drawn by a horse and driven by Joshua Thomas, the library’s janitor.
Alas, in 1910 a freight train struck the wagon. Both janitor and horse were unharmed, but the wagon was destroyed and the book service was out of commission for a year, until the board’s treasurer donated another $2,500 for a replacement.
The Hagerstown library’s new library wagon was an International Harvester truck, and the age of the motorized bookmobile had arrived.
Titcomb died in 1932 at the age of 80 and is buried at the famed Sleepy Hollow Cemetery in Concord, Massachusetts, not far from Ralph Waldo Emerson, Nathaniel Hawthorne and Henry David Thoreau, whose books she no doubt made available to rural readers.