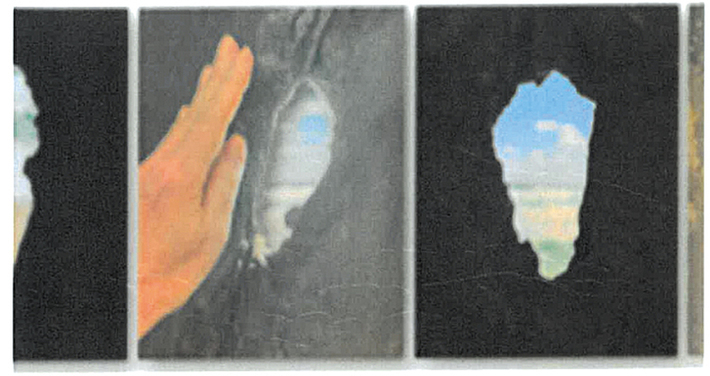 A hand-size hole in the parking garage. Photo provided

A South Palm Beach condo has been cited for code violations related to an eroding sea wall, including holes that allow ocean water to spray into the ground-floor parking garage during rough seas, town records show.
The homeowners association of the Dune Deck, a six-story condo built in 1980 at 3610 S. Ocean Blvd., had been told by private engineers since at least 2018 that the sea wall is in need of repair, a resident said in an email March 5 to the town manager.
“Because of their negligence to take action, the continuous deterioration is now at the point of being a safety hazard putting the building and its occupants at risk,’’ the resident, Leslie Yellin, said. “Parts of the wall have started to crumble, created holes that allow seawater to spray inside during rough seas.’’
Town code officials confirmed the resident’s concerns a few days later on a visit to the garage. One photograph shows a hole roughly the size of a hand. Dune Deck officials have hired an engineer and contractor to make the repairs, but the work can’t start until this fall after the end of sea turtle nesting season, Alan Haenel, president of the Dune Deck’s board of directors, said at a special magistrate’s hearing March 17.
Special Magistrate Amity Barnard gave the Dune Deck one month to send the town a letter from the Department of Environmental Protection confirming that no work can be done until Oct. 31, the end of nesting season.
“Because it has been determined to be structurally unsafe, I want something from DEP saying that even though it has been deemed structurally unsafe that you’re still not permitted to do the work,’’ Town Attorney Aleksandr Boksner told Dune Deck officials.
In remarks to the magistrate, Haenel suggested the failure to make the repairs sooner was the fault of a previous condo board.
“This board is going to be very proactive on the building and maintenance as well, so we never have to appear here again. But we do acknowledge there is a problem,’’ he said.
In an interview after the meeting, Haenel said he personally has watched sea turtles hatch on the beach immediately outside the sea wall, which is why he’s confident the DEP will not allow the work to start until this fall.
He also said the condo engineers have assured him that residents in the building are not in danger.
In other town business:
• On March 15, the Town Council approved on first reading a new ordinance aimed at protecting pedestrians on sidewalks and other walkways that are temporarily blocked by construction vehicles.
Companies whose work will obstruct walkways will each be required to obtain a permit. The permit will be issued on the condition that companies hire an off-duty law enforcement officer or certified flagman to keep pedestrians safe from nearby vehicular traffic.
Penalties for violating the ordinance are $250 for the first offense and $500 for subsequent offenses.
Council member Bill LeRoy proposed the measure because of safety concerns when pedestrians are forced to walk along the shoulder of State Road A1A.
• Palm Beach County Sheriff’s Deputy David Hull, who patrols South Palm Beach, was recognized for being named the town’s 2021 Deputy of the Year.