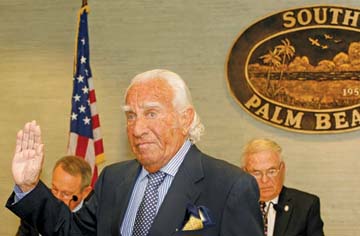 Woodrow ‘Woody’ Gorbach (above) and Bernice ‘Bonnie’ Fisher (below) are sworn into office. 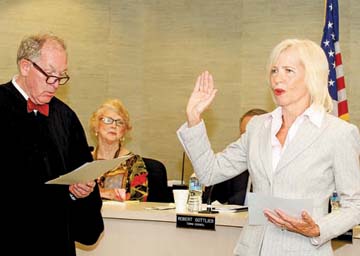 South Palm Beach Town Council members had planned to give final approval to two ordinances that would give the council final say over all development projects in the town.
But then Gary Cohen, the CEO of Paragon Acquisition Group, showed up at the March 24 meeting with two lawyers and a court reporter.
Cohen was concerned that transferring power from the town’s Architectural Review Board to the council could derail his development plans for the Oceanfront Inn site, a property that for years has been in the crosshairs of political controversy.
Paragon wants the town to allow it a six-month extension for beginning development because turtle season and the federal and state permitting process have gotten in the way of progress.
Cohen’s developers had been working with the architectural board, but they worried the proposed shift of control could raise legal complications, or change agreements already in place — or worse.
John Herin, a Paragon attorney, told the council the company “is very concerned that the ordinance is a ‘back door’ attempt by the town to frustrate its (Paragon’s) efforts to redevelop the property in a manner that is fully compliant with the town code.”
Herin also said the company had gotten wind of an idea circulating among residents to buy the property back from Paragon and turn it into a public park.
But council members assured Herin and Cohen that there was nothing subversive going on, and that the town wants Paragon to move forward and build the six-story condominium building that the architectural board approved in August.
“We want you to go ahead with this project,” Councilwoman Stella Jordan said.
“It was not our intent,” said Vice Mayor Joseph Flagello, “to put a fly in the ointment of the Paragon Group.”
Council members unanimously voted to postpone action on the ordinances until the architectural board could give Paragon its six-month extension. Demolition of the old Hawaiian hotel is expected to begin this summer, and by then the council is expected to have its new ordinances approved and in place.
In other business, Councilwoman Bernice “Bonnie” Fischer was sworn in as mayor after defeating incumbent Donald Clayman in the March election.
Fischer campaigned on a promise to focus on beach restoration and working with other governments. She said one of her first acts as mayor will be meeting with county environmental officials to talk about the town’s beaches.
When it comes to life experience, not many elected officials can match Woodrow “Woody” Gorbach, who was sworn in as councilman after running unopposed in March. The 91-year-old Gorbach has been a real estate agent for 60 years and married to wife Lois for 61.
He said dealing with beach erosion will be his priority and that he intends to take classes from the League of Cities to get up to speed on his new job.
Clayman, who was the town’s mayor for six years, stepped down to a round of applause for his service. Commissioners praised him for his sound fiscal management during some tough budget years.
“I feel that we’re in good hands,” Clayman said on leaving. “There are good people leading us and good people working here.”