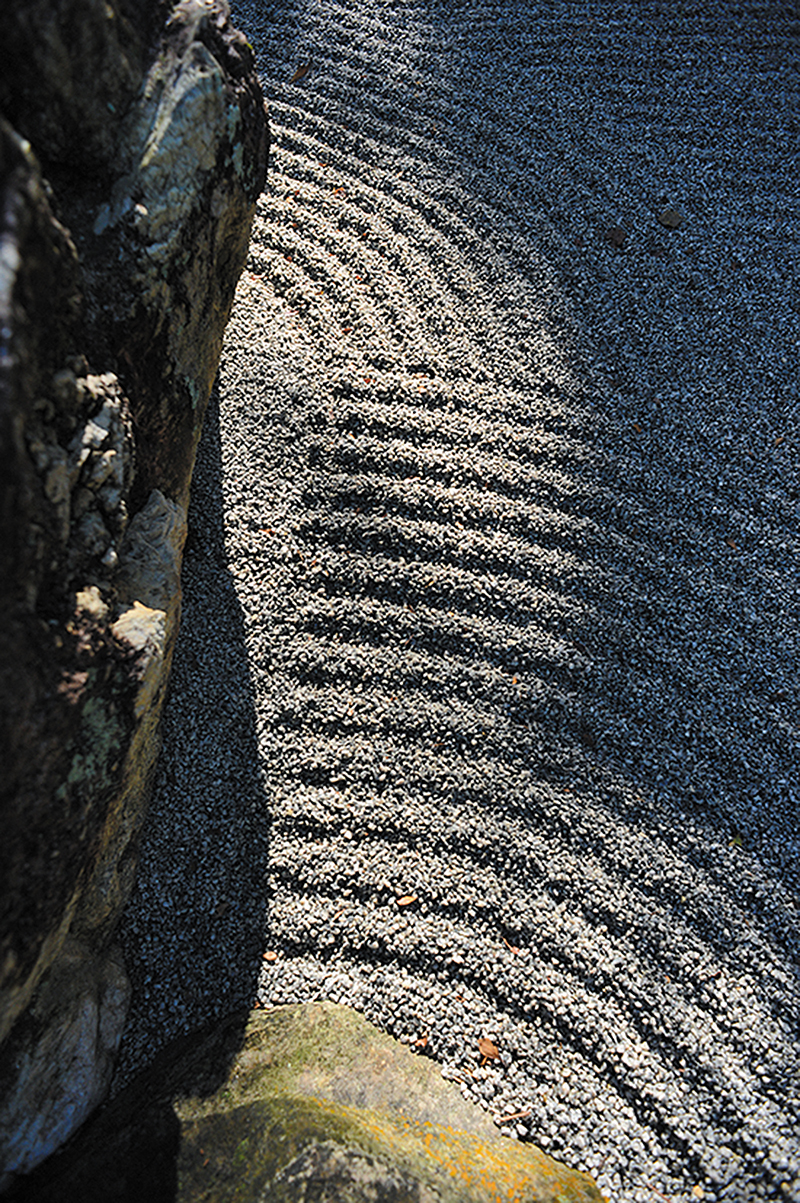 To get the most out of your visit to the Karesansui or Zen garden at the Morikami Museum and Japanese Gardens in Delray Beach, put away your cellphone and pay attention to what’s around you.

Then, as you experience the peace that seems to envelop and emanate from this garden, let it guide you toward mindfulness just as the Zen Buddhist monks used viewing these  gardens to aid their meditation.

“Visiting the garden is like a mini-therapy session,” says garden curator Heather Grzybek, who explains that the Karesansui Late Rock Garden, dating from the 15th and 16th centuries, is one of six historic Japanese gardens represented at Morikami. 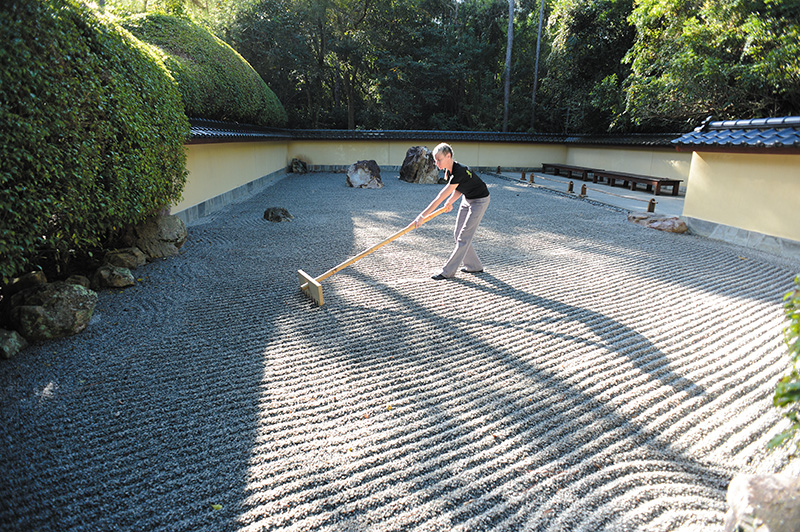 Heather Grzybek, garden curator at the Morikami Museum and Japanese Gardens, rakes the Karesansui Late Rock Garden into a wave pattern that mimics the water. The shrubs to the left represent mountains and the rocks in the background are islands.

Here, carefully chosen rocks and granite gravel, instead of plants, represent the essence of nature. Boulders, with their best faces forward, are set in a grouping of three to represent islands; the precisely raked gravel suggests water rippling around the stones.

Although this garden is reminiscent of a traditional Zen garden in Japan, it has unique touches. For example, a traditional rock garden has walls on all four sides to create an intimate space that helps you focus on the here and now instead of what is around the corner.

But this one has tile-topped stucco walls on only three sides with a hedge filling the void. That’s because the garden’s designer Hoichi Kurisu, who was born and educated in Japan, believed that when the garden was created in 1999, Japan had been a closed society. He wanted his country to be more open for the new millennium. “So, he broke the wall,” says Grzybek.

When it comes to maintaining the beauty of this garden, Grzybek or a volunteer spends about 90 minutes sculpting the gravel.

The process — done at least weekly — begins with a leaf rake used in one direction to remove any debris covering the stones. Then a heavy homemade wooden rake with large wedge-shaped teeth and a bamboo handle fashions the gravel to look like current and waves. 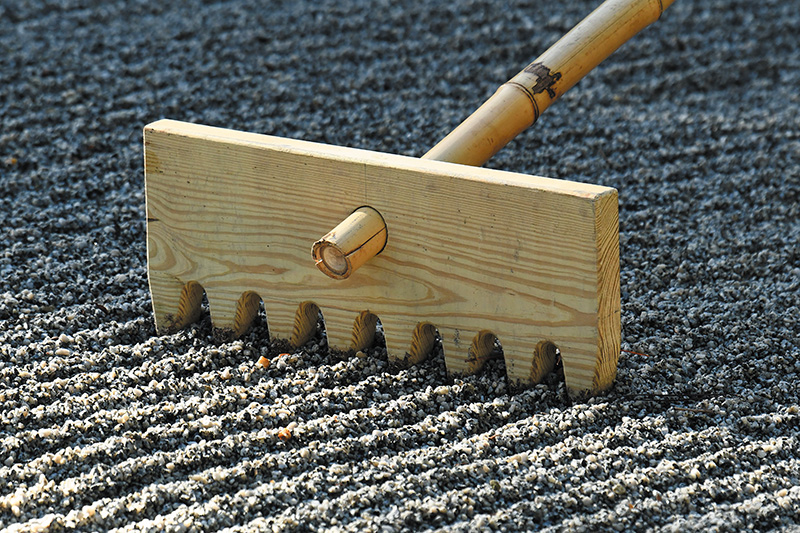 Grzybek uses a wooden rake with a bamboo handle to pull the gravel into patterns.

“It’s a very methodical way of raking,” Grzybek says. “You don’t just rake here and there. It’s almost like a dance. Each step leads to the next.”

When she’s done, no footprints remain. If a visitor bypasses the subtle bamboo barricades and leaves footprints in the gravel or rain ruins the current and wave pattern, the job has to be done more often.

The work is hard.

“Often it’s 85 to 90 degrees with 100% humidity and the sun is reflecting off the gravel right into your face. Your brain is already telling you that you don’t want to do this,” she says. But Grzybek has learned that these forces of nature help her focus.

“It’s almost like what you experience in a yoga session,” she says.

The garden is designed to be viewed from one vantage point so that no single element draws your attention. You see the landscape as a whole, as if it is a museum exhibit. 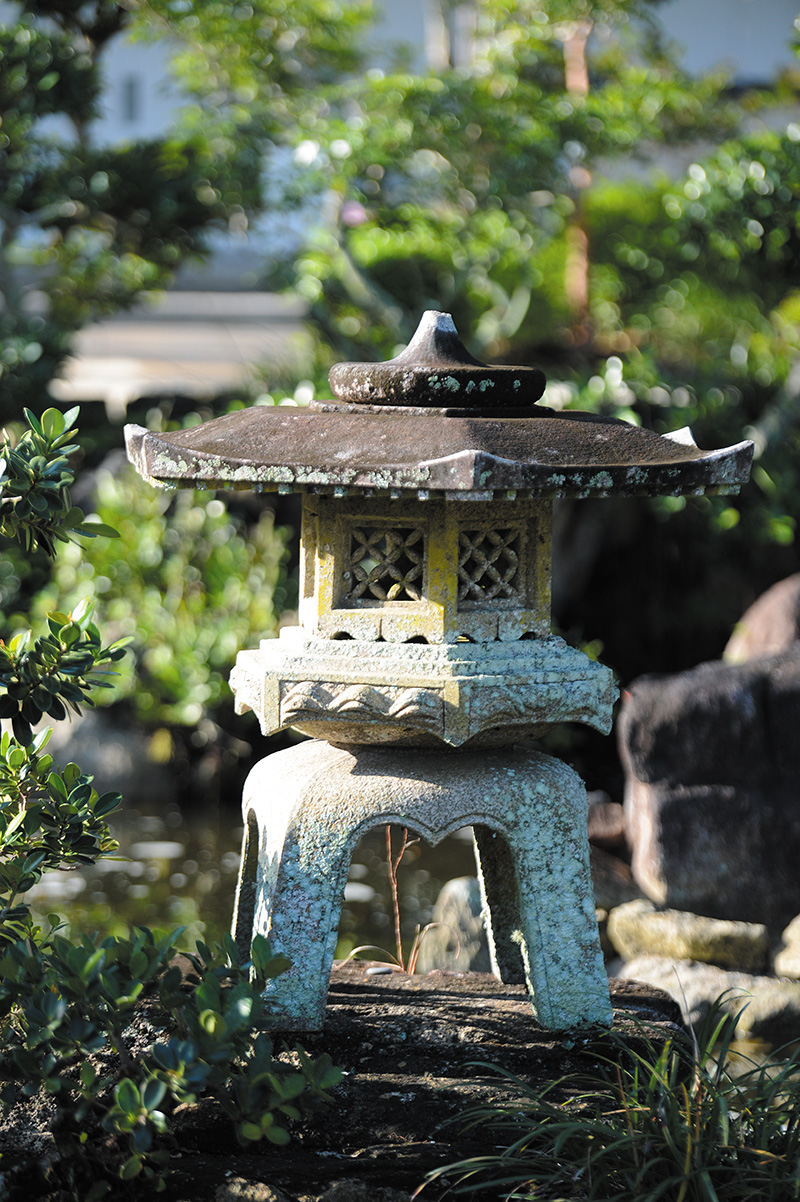 A lantern stands sentry in the garden.

Of course, it’s up to you how you experience this garden. You can hurry in, grab a selfie and move on to another historic garden. Or you can take a seat, turn off your phone, quiet your mind so you don’t think about that game on television tonight or what to make for dinner. Then, just let yourself be.

That’s how Buddhist monks have experienced these types of gardens for centuries and that’s how this Karesansui garden can remain relevant as a spiritual resting place for visitors today.

If You Go
What: Karesansui Late Rock Garden at Morikami Museum and Japanese Gardens
Where: 4000 Morikami Park Road, Delray Beach
More info: 561-495-0233; www.morikami.org
Public programs: The garden holds periodic raking demonstrations and soon will add “raking as therapy” sessions to its calendar. Raking demos are scheduled for 10:30 a.m. Feb. 22 and 10:30 a.m. March 27. The demos are free with paid admission; check the website for more information.
Admission: Adults, $15: seniors 65 and up, $13; youngsters (ages 6-17), $9; children (5 and under), free; no discounts on festival days
Hours: 10 a.m. to 5 p.m. Tuesday through Sunday; closed Mondays and major holidays