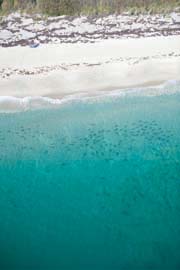 Sharks fill the water along the shore of Gulf Stream. Photo provided by Florida Atlantic University

Marine animals are coming south to Palm Beach County seeking warmer weather and water — ocean snowbirds, if you will.
Blacktip and spinner sharks are just starting to show up offshore in their annual migration south from the Carolinas. And manatees are traveling south from north Florida to warm up in subtropical lagoons.
Ninety percent of the migrating sharks, which travel in huge numbers within eyesight from the shore, are blacktips and 10 percent are spinners, said Stephen Kajiura, Florida Atlantic University professor, who researches sharks.
They started arriving in late December and will peak in mid- to late January. Most will be gone by late February, he said.
Last year, the large numbers of sharks thrilled local photographers and tourists, who snapped photos of the sharks that clearly could be seen tumbling in waves rolling onto shore. The previous year was even better.
“We saw 15,000 sharks in Palm Beach County alone within 200 meters from shore, and that doesn’t count those sharks going deeper,” Kajiura said. “That was our peak a couple of years ago. Last year was a relatively mild winter and we didn’t see that many.  I don’t know what we’ll see this year.”
Since 2011, Kajiura has conducted aerial surveys of the sharks off the coast, many cruising past unaware swimmers.  FAU graduate student Shari Tellman painstakingly counted the sharks frame by frame from Kajiura’s video for an accurate assessment of the numbers.
Kajiura has lost funding for the surveys this year, but will still do the shark counts for his research. “I’m just doing the surveys out of my own pocket because this is so important.”
Previous funding came from Florida Atlantic University and Southeast National Marine Renewable Energy Center. Kajiura said he is getting help from Paul Kramer, pilot and owner of Learn to Fly Center at Pompano Airport, who is flying him along the coast to film sharks for surveys, which Kajiura started in late December.
As the southern terminus of the shark migration, southeast Florida is in an excellent position to monitor the habits and health of the sharks, he said.
“Large numbers of sharks are indicative of a healthy ecosystem.  If you have a lot of top-level predators able to come down, it’s a healthy ocean and a good food base to support them. Sharks follow the bait fish,” he said.
If the ocean warms up too much, the sharks will stay farther north, he said.
“We have this strong correlation between shark abundance and water temperature.  The oceans are getting warmer, and what may be happening is that as the water warms up, 20 or 30 years from now sharks could be wintering farther north, and what will that mean to the ecosystems as a whole?” he said.
Kajiura welcomes the sharks even as most people are leery of so many sharks lurking in the water.
Although blacktips are probably the cause of the greatest number of bites in Florida, this shouldn’t be cause for too much concern, he said.
“There are about 1,000 sharks per square kilometer of ocean, and so when you put that in perspective, the number of incidents are remarkably small, and very few people are bitten and if they are the bites are minor,” he said. “Florida has such clear water that sharks are able to see that you’re a person and not a fish, and they’re not interested.”
The best way to avoid shark bites, he said, is to stay away from large schools of baitfish, and to stay out of the water at dusk and dawn at low light, “when it’s harder for them to see the difference between the sole of your foot and a fish.”

Dismal year for manatees
Manatees began showing up in small numbers in Palm Beach County in December. In mid-December there were only 19 manatees found during an aerial survey, said Paul Davis, division director of the Palm Beach County Department of Environmental Resources Management.
“When we get cold weather in Brevard and St. Lucie counties, we will see a big jump. The highest we’ve had is 800 at the peak,” he said.
This has been a dismal year in the state for manatee deaths, although Palm Beach County had six mortalities for the year up to Dec. 6, which is a little below the average of 10, said Davis.
Statewide, 803 manatees died this year as of Dec. 13, compared to 392 deaths last year, said Kevin Baxter, Florida Fish and Wildlife Conservation Commission spokesman. Red tide on the west coast accounted for 276 deaths. The previous high death total from red tide was 151 in 1996.
There were more than 90 deaths in the Indian River lagoon in Brevard County. “We’re still investigating the cause of those deaths. It appears to be the loss of sea grass in that area because of algae blooms,” Baxter said.
Other causes were watercraft and cold stress, he said.
The number of manatees in Florida, according to aerial surveys in 2011, was 4,834, which is a minimum count.