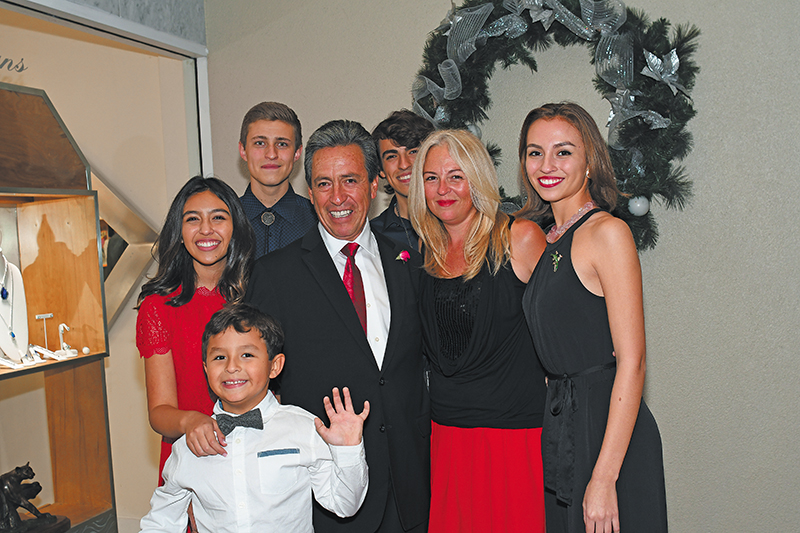 The Maldonado family during a Christmas party in 2017 includes Marco waving in the front, with (l-r) Sofia, Alex, Pedro, Max, Shannon and Kathryn. Photo provided by the family

Pedro Maldonado is not a flashy man, but his jewelry dazzles. He opened his store, Jewelry Artisans, in Plaza del Mar in the late 1980s after having a jewelry business in Palm Beach for seven years.

“We came here because they were going to build the hotel across the street,” Maldonado said of the Ritz-Carlton. He thought the luxury resort, which opened in 1991 and transitioned into Eau Palm Beach five years ago, would be good for business — and it has.

From a family of master jewelers in Cuenca, Ecuador — a city known for its artisans —  came crowns, church artifacts and unique jewelry of the highest quality. Maldonado started working in his father’s shop when he was 7.

When he was 16, Maldonado moved to New Jersey to live with his sister and brother-in-law. He studied at the Spanish-American Institute in Manhattan and got a job in the jewelry district on 47th Street. He worked with the renowned jeweler Louis Tamis, whose clients included Cartier, Tiffany and Bulgari.

Eager to succeed in his craft, Maldonado traveled throughout Europe to research and learn the skills of the old masters and learn the techniques of Russian, Greek and Italian jewelers.

His experience in New York, he says, “was really sort of magical.” While he missed his family in Ecuador, having his sister and her family there helped him feel at home.

Because he already knew the basics of the trade, he found work in the jewelry business immediately. The company that employed him was run by a Russian immigrant who proved to be an excellent teacher for Maldonado.

“It was really my luck that I landed that job,” he says. The company did work for Cartier, Tiffany and all the best jewelry retailers in New York at the time.

“I learned how to make handbags out of gold for Tiffany,” he said. “Each handbag at the time was $12,000 or $13,000. We used to make cigarette boxes, gold pens, cigarette holders and lipstick cases, as well.”

His art, he says, is designed for those who prefer their jewelry custom made with the mark of distinction.

His first store in Plaza del Mar was in a building that was razed as part of the shopping center’s renovations to make room for the new Publix. In what Maldonado calls “a miracle,” space for his shop —  about 2,100 square feet — became available alongside Evelyn & Arthur Clothing & Gifts. Evelyn & Arthur downsized by half and turned over the eastern side of the unit to the jewelry store, which is now more than double the size of its former spot.

Plaza del Mar has been good for more than Maldonado’s business. Not long after he moved to the plaza, he met and married his wife, Shannon, there. He was having coffee at Café del Mar, next to his shop, when he met her. She was a college student and part-time waitress and, like him, a karate devotee. Both have black belts.

They were married at the now defunct Assembly restaurant in Plaza del Mar. Maldonado made the wedding rings with gold mined in his home town in Ecuador. For his wife’s engagement ring, he set a treasured cornflower blue sapphire, cut in Sri Lanka, in a six prong mounting with two satellite diamonds.

The couple lives in North Palm Beach with their five children, three boys and two girls. Two sons, Max and Alex, work with their dad at Jewelry Artisans. Both are surfers, so when weather and time permit, they run across the street to the Atlantic to catch some waves.

The boys gave their dad a paddleboard for Father’s Day, which Pedro Maldonado is trying to master. In the meantime, he relieves stress by swimming about two miles from Lantana Beach to the Lake Worth Pier, then runs back on the shoreline.

Then he’s back to mentoring his sons on the fine art of jewelry making. And so the Maldonado family tradition continues.

Arthur, who had been in the garment business in New York, thought how hard could it be, according to his son-in-law, Fred Weissman, the company’s chief financial officer and husband of the Lewises’ daughter, Adrianne. Fred and Adrianne Weissman had

worked in Macy’s in New York. They married and moved to Florida in 1986 to join the family business. That year, they opened another store in Plaza del Mar.

“The original store at Plaza del Mar was a swimwear store called Evelyn & Arthur’s Beach House,” Fred Weissman said. “That’s where Lang Realty is currently. Over the course of years, we’ve had lots of different stores in the plaza.”

A year later, Evelyn & Arthur expanded next door to what is currently Jewelry Artisans. “That became a little bit of a sportswear store,” Weissman  said. “The year after that, we expanded again and turned that store into a men’s store. So, at one point we had a swimwear store, a card and gift store, a men’s store, and at one point, over in the building that’s now demolished, we had a large-sized outlet store. We’ve done the outlet store there in three different locations over time. So, we’ve really run the gamut at Plaza de Mar.”

The original owner’s landlord, John J. Hoecker of Draper & Kramer, was very accommodating, Weissman said. “He gave us the opportunity to try experiments in the center, which is why we kept trying and opening up stores there,” he said.  “Over the course of time, with the changes in the plaza, as the plaza was very strong in terms of its tenant base, we were able to support all those businesses there. But at this point, we’re really focusing on our women’s apparel. The gift store, which is really not a strong business anymore, we let that go.”  Jewelry Artisans occupies that space.

“We’re very, very enthusiastic about what’s going on in the plaza now with Publix coming in and the refurbishing of the center, and of course, the painting and the parking lot,” he said. “It’s always been a great little center. It just requires TLC and the current owner seems to be putting it in there. We’re expecting good things.”

The character of the plaza was very different back in 1986, Weissman said. “There was a very successful children’s store. There were a couple of art galleries, one of which was Brenner’s Art Gallery. There was a pharmacy and a couple of brokers in there and a different real estate office. There was a housewares store and a dry cleaner.”

The plaza had a different feel, he said.  “It was very much serving South Ocean Boulevard, in particular, when the condos were really at their peak. That was really the place people were moving to.”

Little by little, things have changed, Weissman said. “We’ve gone through two or three attempts at markets there, people that obviously didn’t have Publix’s expertise. I expect Publix knows their business and will do just fine.”

“With John G’s in there now and Basil moving over to another spot in the plaza, and of course with Publix, it should have an opportunity to fill back up. It’s just very convenient.”

Some of the folks from across the bridge seem to be back, he said. “We used to do a big business from Atlantis and Boynton Beach and I don’t know if people have traveled over as much as they used to, but I’m hoping with the center filling in we’ll see that traffic coming back again.”

In 1981, three college pals at the University of Illinois at Urbana-Champaign — Rich Draper, Tom Jackson and John J. Hoecker — fled chilly Chicago and landed in Manalapan, where they founded an ice cream store. That shop, the Ice Cream Club, opened Jan. 8, 1982, as the first tenant of Plaza del Mar at the corner of East Ocean Avenue and State Road A1A.

Hoecker, who like Draper worked commercial leasing for the shopping center’s developer, Draper & Kramer, eventually sold his interest in the ice cream store to Draper (no relation to the developer) and Jackson. The two still own it and have expanded the business to include an 18,000-square-foot manufacturing plant in Boynton Beach, where a staff of 60 produces about a million gallons of ice cream annually.

“When we decided to open, we thought we would buy ice cream, but there weren’t a lot of choices, not someone like us now to buy from,” Draper said. “We looked around and ended up going to a restaurant show in Chicago where we found a guy selling a little ice

cream machine and bought it on the spot.”

Back in Florida, Draper and his buddies played around with some recipes and got the store open.

“A lot of the flavors we first started marketing were from customer requests,” Draper said. “People coming in from the Northeast would say, ‘Hey, we tried this at this store or that store’ and we’d make it.”

The partners continued making ice cream in the store for three or four years before acquiring additional space in the plaza to make more ice cream. “This was all in the ’80s and then we went to a bigger building in Boynton Beach where our factory is now. We’ve been here (Boynton) for 25-plus years,” Draper said.

There are other stores that license the Ice Cream Club name, Draper said, but they are all independently owned.

“We love having the retail store, but that’s our only retail store,” he said. “We had to make a choice along the line and picked the production and the distribution. We have over 100 flavors in stock all the time, so we’re kind of a one-stop shop for independent ice cream stores.”

When Plaza del Mar opened in 1982, La Coquille Club across the street was past its heyday, but still operational, Draper said. “It was demolished (in 1986) and for a while we had an ocean view from our front door. The Ritz came in the early ’90s. There was a period where there was just a big dirt field out there.”

A lot of things have changed but a lot have stayed the same, he said. “A1A is still A1A. People kind of cruise along. I remember when I first looked at this site for opening a store. It was in the fall. That’s the slowest time of the year and I was kind of wondering how many people are going to stop here. But I just thought A1A is a road people want to stop on. So, I kind of made the leap there.”

With a five-star hotel across the street (the Ritz-Carlton that became Eau Palm Beach five years ago), the Ice Cream Shop has hosted many famous folks, including Martin Sheen, Steven Tyler, Richard Petty, Kevin James, the Jonas Brothers and Gwen Stefani.

“We don’t take pictures of them and put them on the wall,” Draper said. “It’s nice for people to come in with family and have a relaxed time like everybody else.”

He likes hanging out there, too. “My wife, Heather, and I just live up the road (Palm Beach). It’s just a fun store. I’m proud to have the store, proud to be part of the community. We have community support and the hotel folks are great. The police and fire department, everybody has been real supportive.”