Story and photos by Mary Thurwachter

Accolades keep rolling in for Palm Beach’s Worth Avenue, a collection of more than 200 upscale shops (Tiffany, Chanel, Hermes, Saks, Louis Vuitton and Cartier, etc.) offering everything from designer jewelry, clothing and shoes to internationally acclaimed antiques and paintings.
Conde Nast Traveler dubbed Worth Avenue one of “the top five places to shop in country” and USA Today has it on the list of “10 Most Iconic Streets.” Worth Avenue’s history began in 1918, when Addison Mizner built the exclusive Everglades Club at the road’s west end. That Mediterranean-style structure set the pace for the prestige the shopping area that it is today. Beyond the shops, restaurants and galleries, there is much to see.
Here are five spots not to miss: 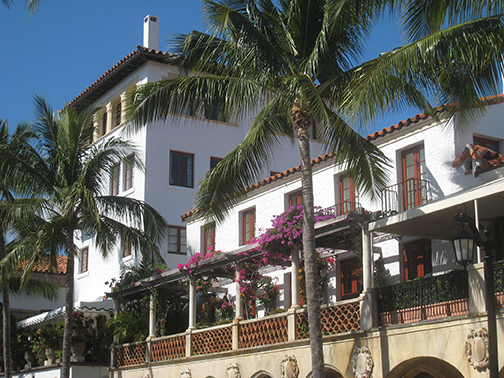 1. Via Mizner
Worth Avenue features eight cloistered courtyards. The via design was intended to resemble Venice, without the water. One of the most impressive is Via Mizner with its winding, covered walkways, fountains and flowers, and colorful tiled stairways. The complex has 19 buildings, 40 small shops, flats and includes Addison Mizner’s five-story apartment at 339 Worth Ave. (above), with a bridge that connects his living space to his offices. Mizner’s love of monkeys is evident throughout. In fact, Mizner’s pet monkey, Johnnie Brown, is buried in the courtyard, which has a monkey motif (below). Look for it if you’re dining at Pizza Alfresco (14 Via Mizner). 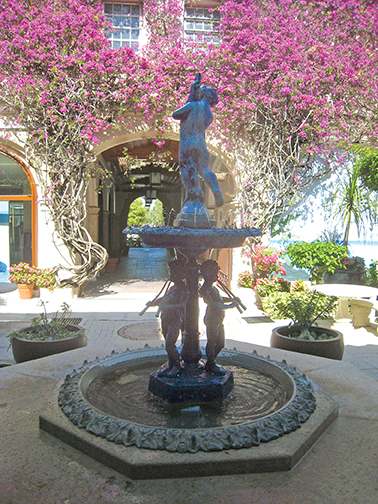 If you’ve lived here awhile, you probably knew this as the Gucci Courtyard. The name changed in 2012 after the Gucci building (256 Worth Ave.) was sold. From gurgling fountains to playful sculptures and colorful bougainvillea, this via is gorgeous and historic (Gucci started his Palm Beach fashion shows here). Via Amore, so named on Valentine’s Day in 2012 by property owner Burt Handelsman, is where Historical Walking Tours of Wonderful Worth Avenue (www.worth-avenue.com/specialevent/historical-walking-tour-at-worth-avenue/) begin on Wednesdays during the season. 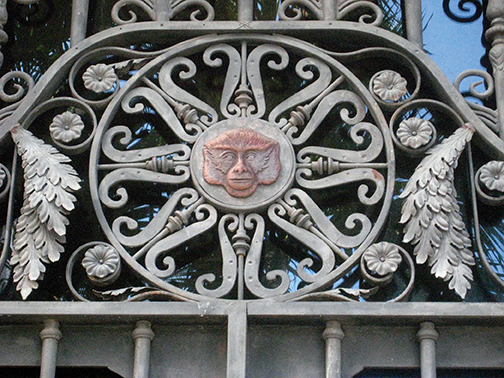 3. Ta-boo
From its beginning in 1941, Ta-boo  (221 Worth Ave.) has been a magnet for the rich and famous. Frank Sinatra, John F. Kennedy and the Duke and Duchess of Windsor dined here. Today’s famous guests include Rod Stewart, James Patterson, Hoda Kotb and Kathie Lee Gifford. The food is good, the happy hour is legendary and then there are those adorable monkeys (above) on the wall! 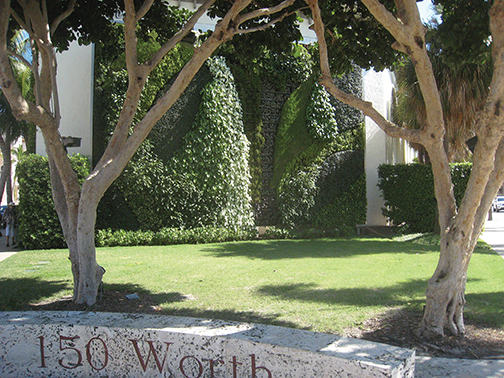 4. The Living Wall
As part of Worth Avenue’s $15 million face-lift in 2010, an 840-square-foot vertical garden was added to the west wall of the Saks Fifth Avenue (above). The living wall is made up of 10,900 plants.  Shoppers often stop to admire the wall (150 Worth Ave.) but the wall’s most dedicated watcher can be found across the street in the window of the DTR Modern Galleries at 440 S. County Road (right). A security guard never takes his eyes off the wall. He’s actually a sculpture by Marc Sijan but looks so real you have to stare back at him awhile to see that he’s not breathing! 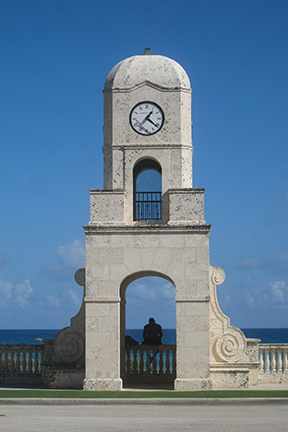 5. The Clock Tower
Designed by Bridges Marsh & Associates (both Digby Bridges and Mark Marsh are Ocean Ridge residents), the 30-foot tower on the sidewalk at the east end of Worth Avenue serves as a monument to the Palm Beach Pier that stretched into the Atlantic from 1926 to 1969. The landmark, built in 2010, also alerts drivers on A1A that this is where Worth Avenue begins. Tourists and other shoppers can’t resist using the tower as a backdrop for a selfie or as a convenient spot for a quick siesta.