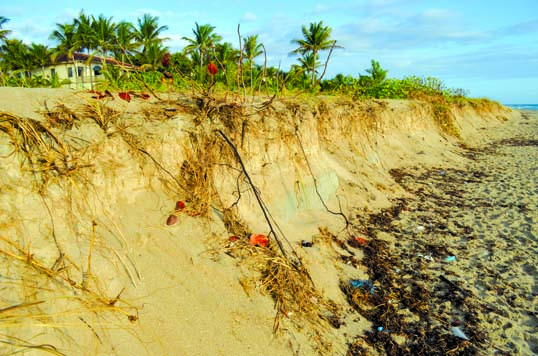 Owners want the city to ask for an emergency state permit to put additional sand north and south of the planned project because of sand loss in those areas and damage to the dunes, said Andy Katz, vice president of the Beach Property Owners Association in Delray Beach.

The current renourishment project will include the beaches that run from just north of Atlantic Avenue south to 700 feet south of Linton Boulevard.

“We had an excellent dune system that did its job protecting the road and houses, but that dune system did take a hit, and that makes us more vulnerable to future storms until the dunes are restored,” said Katz.

Sand permits can take two to three years to process, he said, but an emergency permit could be done in a matter of days or weeks.

The deadline for emergency permits was late December, but that deadline has been extended, according to Dan Bates, Deputy Director of Palm Beach County Environmental Resource Management.

“As of now the deadline has been extended to late January, but that deadline may be extended until late February. The city of Delray Beach has to declare an emergency, and they need to move on it right away,” he said.

“Property owners are very much in support of asking the city to treat this as an emergency. And adding sand to those sections at the top and south ends at the same time as the rest of the beach restoration would save a lot of money,” Katz said.

Delray officials heard a report on the association’s concerns at a recent meeting, said Rich Reed, the city’s public information officer. “The city staff has been looking into various options with this issue and are investigating those options we have. At the next commission meeting or workshop we will bring a consultant in to talk about it.” The date for discussing emergency permits has not been set.    The money for the present project has been approved. The city has received reimbursement authorization of more than $4.02 million from Palm Beach County and the state Department of Environmental Protection to complete this project.

The city of Delray Beach will pay the remaining $5.2 million. FEMA will not be giving money for Florida beach restoration.

Many residents didn’t know that there was no dune in Delray Beach until the 1970s when the city started the dune system and planted native vegetation including sea oats, Katz said. The water came almost to the sidewalk on A1A.

“The city was very forward-thinking when they started the dune program in the early ’70s. Over the years, the beaches have gotten wider so we have more protection. Citizens want to continue that successful program,” he said.

At the association’s December meeting, residents discussed how lucky they were to have had those dunes to protect them against Sandy and other storms.

Other problems in the areas north and south of the planned project include loss of beach that is forcing beachgoers to walk on fragile dunes and trample sea oats and other native plants. Sunbathers are putting blankets on sea oats, severely damaging vegetation. Those dunes should be roped off, Katz said.  In addition to asking for more sand in those areas, homeowners want the city to plant sea oats and other native plants on new dunes.

Katz stresses that healthy dunes benefit everyone, including homeowners to the west of A1A.

Katz said the association will ask the city for the additional sand and emergency permit. “We need to make this a high priority item,” he said. “We hope to get on the agenda at the next commission meeting. It’s a time-sensitive issue.”

Asking for sand after Sandy has turned into a family matter for Katz. “Oddly enough, my brother lives in Fort Lauderdale and they were able to get emergency permits for sand when the barge is there in February.” 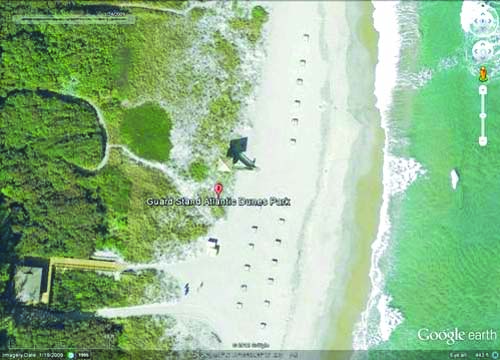 A satelite image taken in 2011 shows a wide beach at Atlantic Dunes park. An image a few days after Hurricane Sandy unleashed days of pounding surf, eroding much of the beach. Photos by Google Earth and Andy Katz