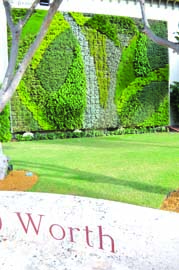 The vertical garden on the wall of Saks Fifth Avenue on Worth Avenue
in Palm Beach is a green form of public art. The garden is illuminated
by spotlights after dark. Jerry Lower/The Coastal Star

On a busy corner of Worth Avenue and South County Road in Palm Beach, there’s a triangular patch of nicely manicured grass. A bench made of curving limestone blocks defines the edge of it.

This is a popular spot, particularly at this time of year when you need to take a break from holiday shopping. In fact, just about everyone who passes stops to have their picture taken here.

“Why?” you ask. After all, it’s just a bit of grass and hard rock seating.

At the end of the building that is Saks Fifth Avenue, there’s a vertical garden. It is made up of plants growing perpendicularly out of a 24- by 35-foot frame to create a living piece of abstract art.

It’s done with “brush strokes” created by using nine different plant varieties. They differ in color and texture as well as the size and shape of their leaves to give life and lift to the “painting.”

The garden actually is made up of 1-foot-square panels secured onto the steel frame. The panels are fibrous envelopes filled with a coco fiber growing medium.

Plants grow out of the 13 holes punched into each of the 840 panels. That adds up to more than 10,000 plants used to create this wall garden.

The idea of placing a living wall here at 150 Worth Ave. was the brainchild of the Garden Club of Palm Beach.

They wanted a wall that would have an abstract design done with all green — not flowering — plants. And they had some recommendations, including wanting to use natives. So in 2010 they contracted with GSky Plant Systems Inc., to make their wishes come true.

Funny thing, she had just been to the Salvador Dali Museum in St. Petersburg. As a result, she decided to add a subtle hint of a picture to her abstract creation. “Guessing what I had in mind kind of makes the wall interactive,” she says.

Go ahead and search for her concept. Look hard and use your imagination. Some people divine a boat, others a bird, even a slingshot.

“It’s like clouds in the sky — everyone sees something different,” says Kotalic, who works at her company’s newly opened Delray Beach offices on George Bush Boulevard.

Besides adding a touch of whimsy to the wall, she had to take the environment into consideration.

On this noisy corner, she had to contend with wind, salt air and western sun. She also needed a large number of plants that would grow perpendicularly instead of toward the light as many do, and ones that would do well considering the frame’s irrigation system.

Originally, the wall included mondo grass that never thrived and silver sawtooth palm that became dinner for critters. Those had to be replaced, but today she’s perfected the plant mix.You can enjoy this natural piece of free public art at any time. It’s partly shaded from the sun by two trees during the day. And at night, spotlights accent its vibrant but natural colors.

The Living Wall is at 150 Worth Ave., Palm Beach. Free and open to the public daily.

Deborah S. Hartz-Seeley is a certified master gardener who can be reached at debhartz@att.net when she’s not digging in her garden.