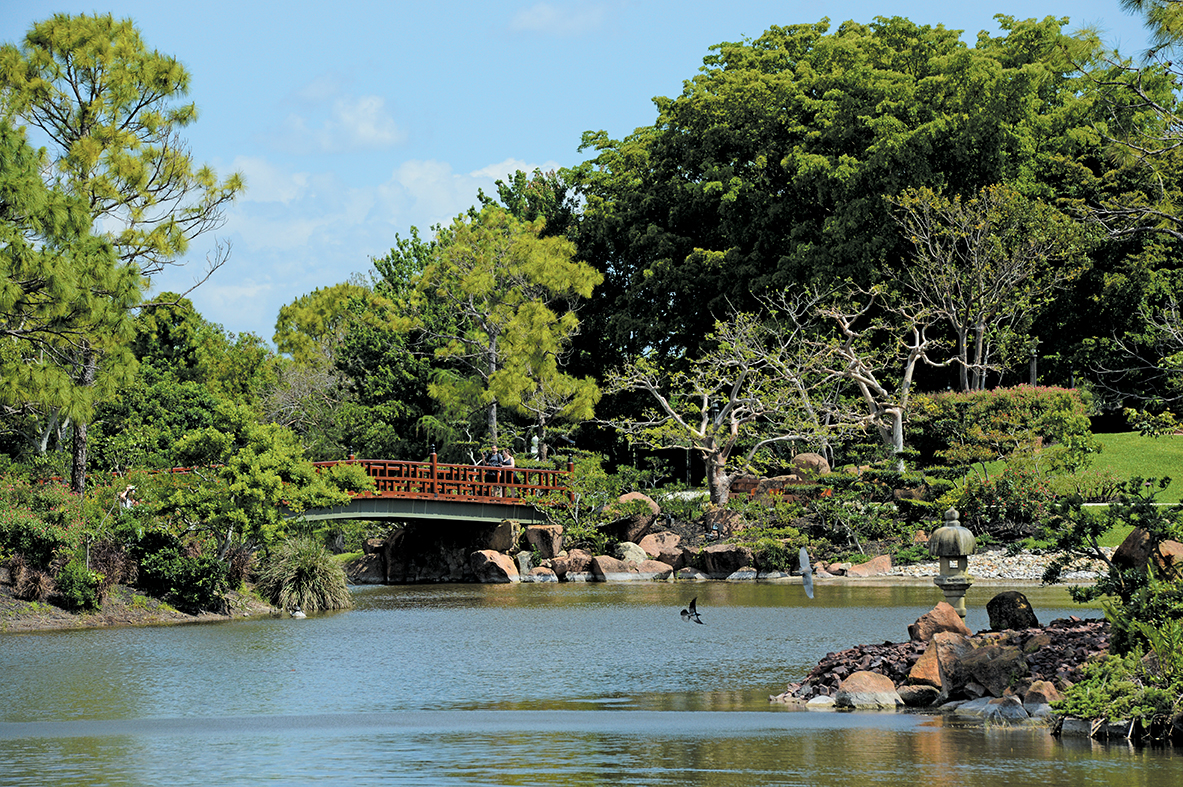 and were intended to be viewed from a boat. At the Morikami, lush trees and shrubs

have been selectively pruned to create the impression you’ve been transplanted to a historical Japanese garden. 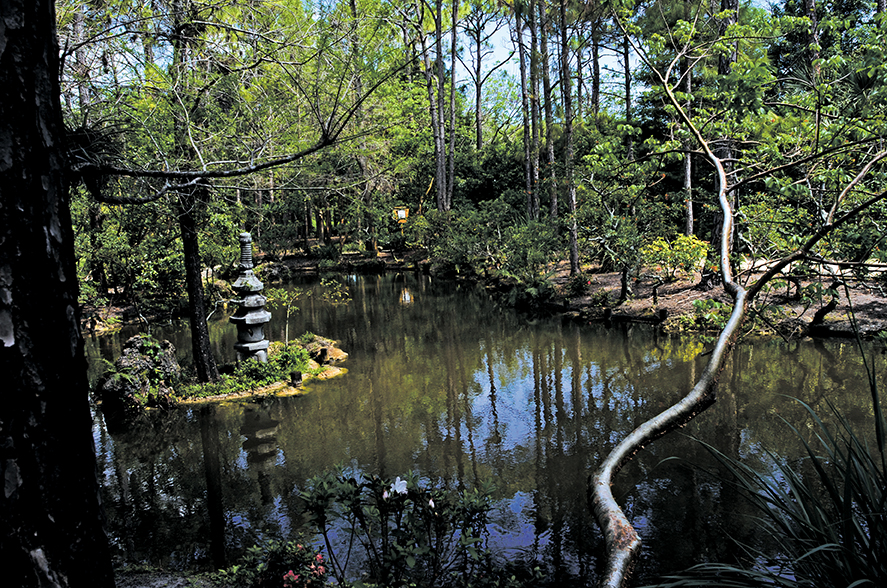 The Paradise Garden is a representation of the Pure land, or Buddhist heaven.

Gardens like this were intended to be walked through, not viewed from a boat.

Historically this garden design dates from the 13th and 14th centuries. 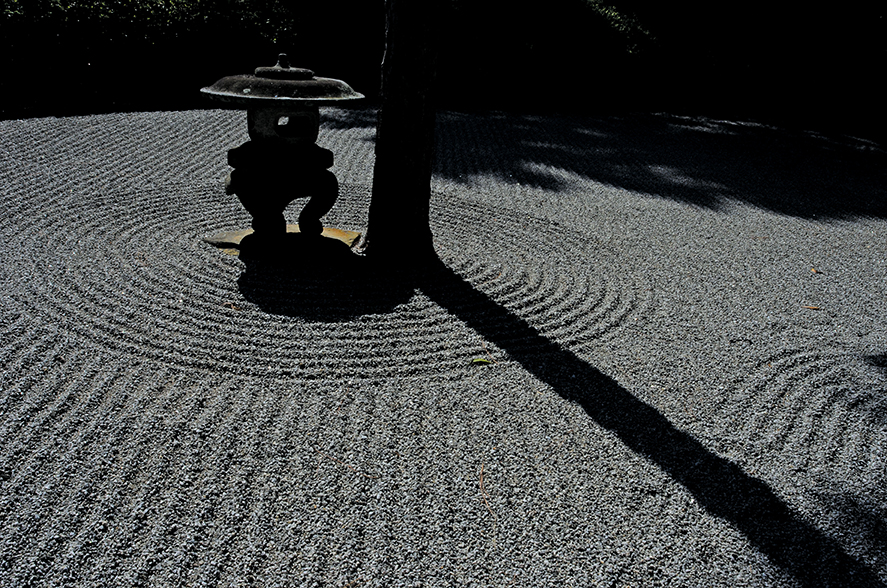 Landscape using well-maintained gravel is a classic Japanese technique from the 17th or 18th century.

It is sometimes referred to as borrowed scenery.

Feel the breeze on your skin, inhale the aroma of bushes and flowers, fill your ears with the gentle sounds of flowing water and singing birds. This is just some of the beauty you’ll experience at Morikami Japanese Gardens in Delray Beach.
Sure,the garden has plenty of plants, such as podocarpus, Mexican petunia, ficus, azalea, pentas, slash pine, sable palm, plumbago, as well others less familiar.
But this is not a botanical garden with signs identifying each plant. In fact, the individual plants don’t really matter.
“What is important is that you experience how the garden appeals to your senses so that you can be in harmony with nature,” says Freya Homer, who is the docent on our walking tour.
This Japanese garden, which first opened in 1977, was re-envisioned in 1999 by noted Japanese landscape architect Hoichi Kurisu. He was engaged to create “Roji-en: Garden of the Drops of Dew”— described as “a garden complex for the new millennium.”

These 16 acres are such a special place that the North American Japanese Garden Association hosted about 150 people here at its March conference focusing on creating “havens for healing.”
And no wonder. Just stepping into this garden you can’t help but relax and unwind.
Every time you come to the garden, it will look different, because it grows according to the cycles of nature. Sometimes you may see blooms, sometimes trees will wear their finest greenery and sometimes a dry spell may turn things a bit brown.
“It’s all about man and nature; nature’s beauty and man’s skills,” says Homer, who has volunteered here for 22 years.
Gravel trails wend their way through six gardens created by Kurisu. He took his inspiration for each from a different period of Japanese political and cultural history, ranging from the ninth century to the early 20th century.
“The Japanese culture is like a huge jigsaw puzzle. The more you learn, the more you see how all its pieces fit together in one,” Homer says.
For example, the Paradise Garden represents the 13th and 14th centuries, which was a time of prolonged civil war in Japan and portrays Kurisu’s vision of Buddhist heaven. Set in its own time, it would have served as a place for war-weary samurai to escape combat and center themselves.
Today it is a place for people to contemplate carefully placed rocks and a pond in the shape of the Japanese character representing “heart.”
Along the way, you’ll also find yourself in more modern gardens such as the one inspired by life at the beginning of the 18th century, when Tokyo was the largest city in the world with 3 million inhabitants, says Homer. People needed a place to escape but space was at a premium.
This, the Hiraniwa Flat Garden, is designed to fool your eyes. The gravel is raked to make the space look larger and a tall tree adds depth.
The garden designer also uses the element of shakkei or “borrowed scenery,” to trick your perception of space. You can see the main Morikami building that is actually a half mile across the lake. But from this vantage point it looks like it’s part of this garden, making the space seem grander than it is.
But words are not enough. You will have to visit Morikami to discover these carefully crafted gardens for yourself — where it’s not about the plants per se but the wisdom, beauty and peace you’ll discover within.

Deborah S. Hartz-Seeley is a master gardner who can be reached at debhartz@att.net.

What to look for  in the Morikami Japanese Gardens

Age: Age is revered in Asia for its stability, endurance and wisdom. That’s why you’ll find older trees with their gnarled roots and trunks covered with lichens. Also notice the yin and yang of these trees’ delicate lacy leaves and sturdy deep roots.
Bamboo: It’s an important part of a Japanese garden because it propagates itself and grows quickly. You can hear it rustle in a breeze. When bamboo grows thickly it can actually darken the area; when thinned, it brings in light.
Bridges: The bridges do more than join pieces of land. For example, in the Shinden Garden you’ll notice a side-by-side bridge that slows you down so you can’t run and miss what the garden designer wants you to see. And, as you go from one part of the bridge to another, you are provided a new perspective on the scene in front of you.
Deer Chaser: Many years ago, someone came up with this ingenious solution for chasing critters from streams. The combination of bamboo “pipes” filling with water and then periodically depositing it into the stream creates a monotonous and repetitive sound that becomes almost hypnotizing. Although Western children viewing a deer chaser often drop pennies into the water thinking it is a wishing well, it is not.
Ferns: They, like humans, have the ability to grow and prosper in dark times.
Rocks: Rocks can survive the elements of nature, an attribute that also is important in man. The samurai would use rocks to barter for goods. And when they received a new rock, they would name it and have a party. Many of the rocks you see at Morikami were brought in 17 rail cars from Texas; others are the limestone rock native to Florida.
Water: Moving water adds life to the garden. When it is still, it can act as a mirror reflecting what’s around it. You will notice the water in the lake at Morikami is always moving because of the shape of the islands and the fact it’s fed by a sluice. Many of the trees are angled toward the water, providing energy to the landscape and reminding us that we, like trees, need water.
Water Iris: From a bridge in the Shinden Garden (ninth to 12th centuries) you may be lucky enough to see yellow and purple irises growing in the water. The leaves of these water irises each resemble the shape of a samurai’s shield. On May 5 of each year, Japanese mothers take the leaves and grind them to put in the bath water of their baby boys. This is to make the youngsters strong and brave like samurai.
Source: Freya Homer, docent at Morikami Museum and professor of Japanese culture at Nova Southeastern University.
If you want to learn more about specific plants used in the garden, resources are  available in the Morikami library.