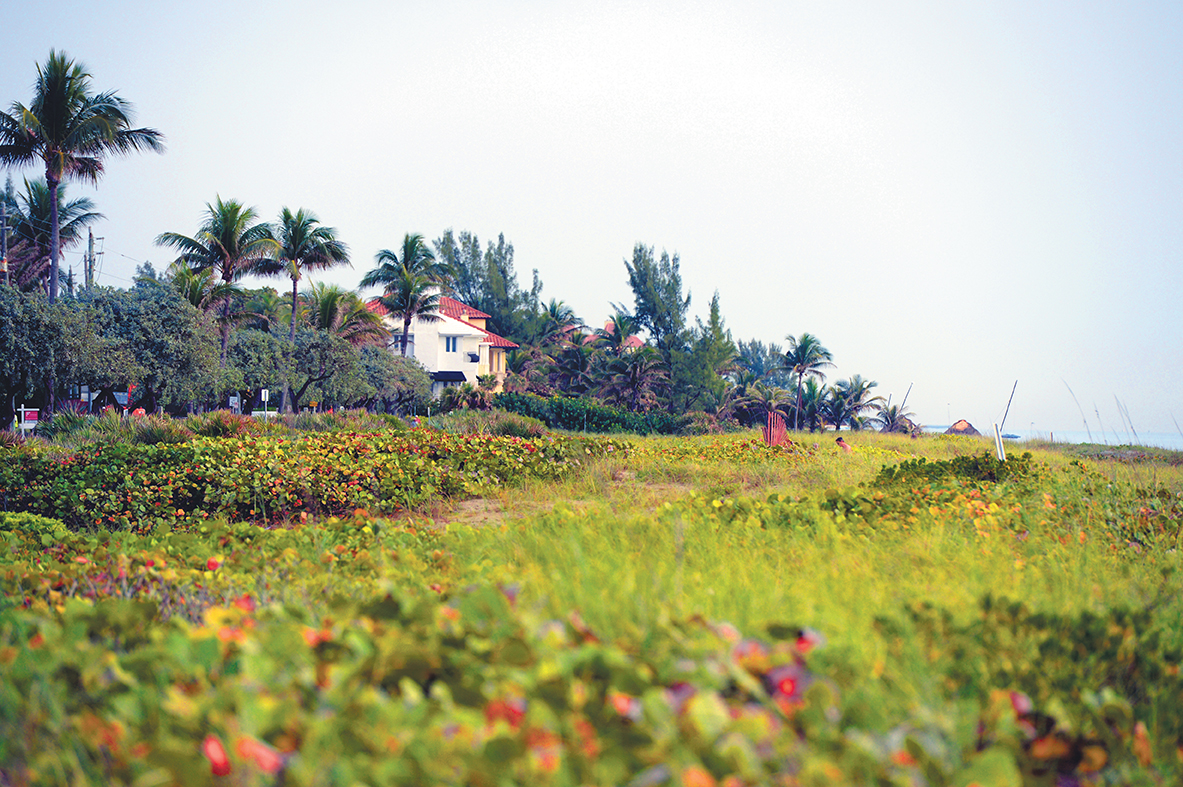 and control erosion. It is more than shoulder high in many places. 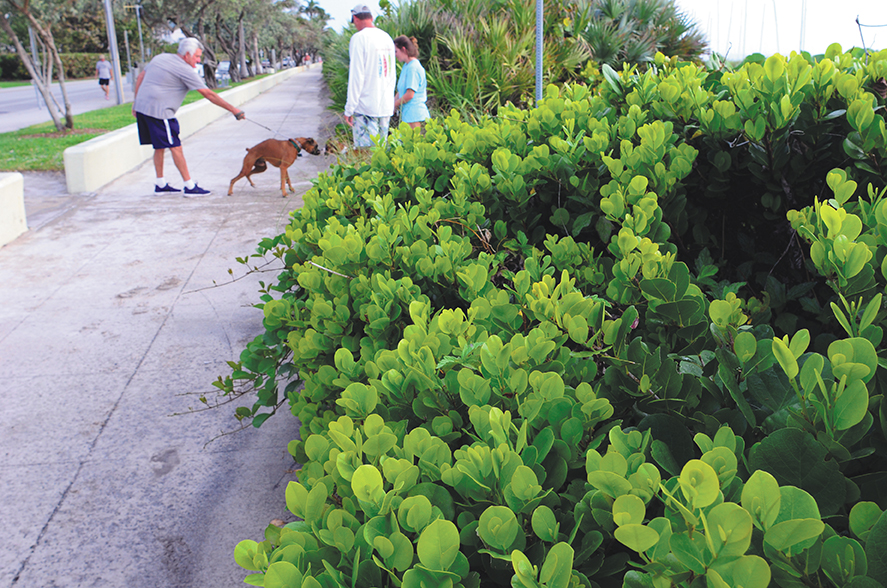 Horizontal coco plum has adapted to the dune and lines the sidewalk in many places. 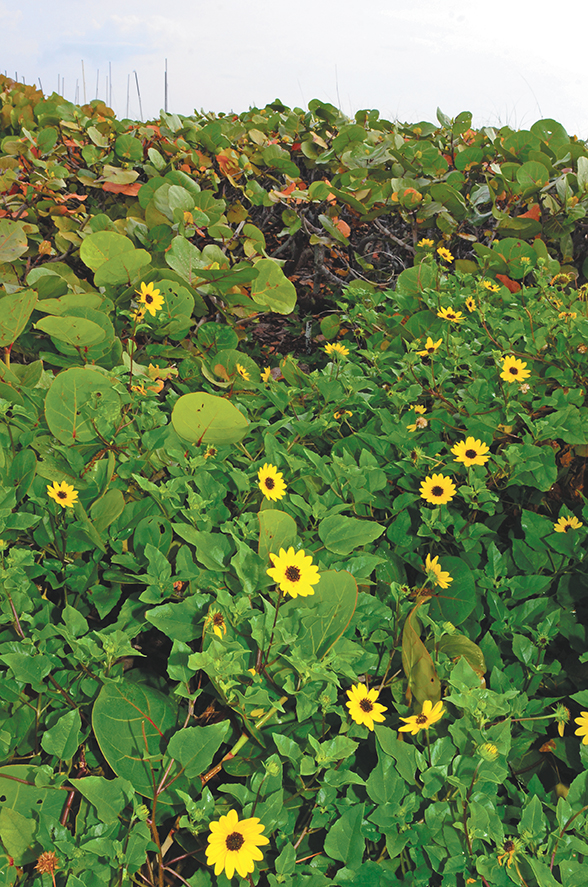 Dune sunflower is know for its yellow and black bloom. 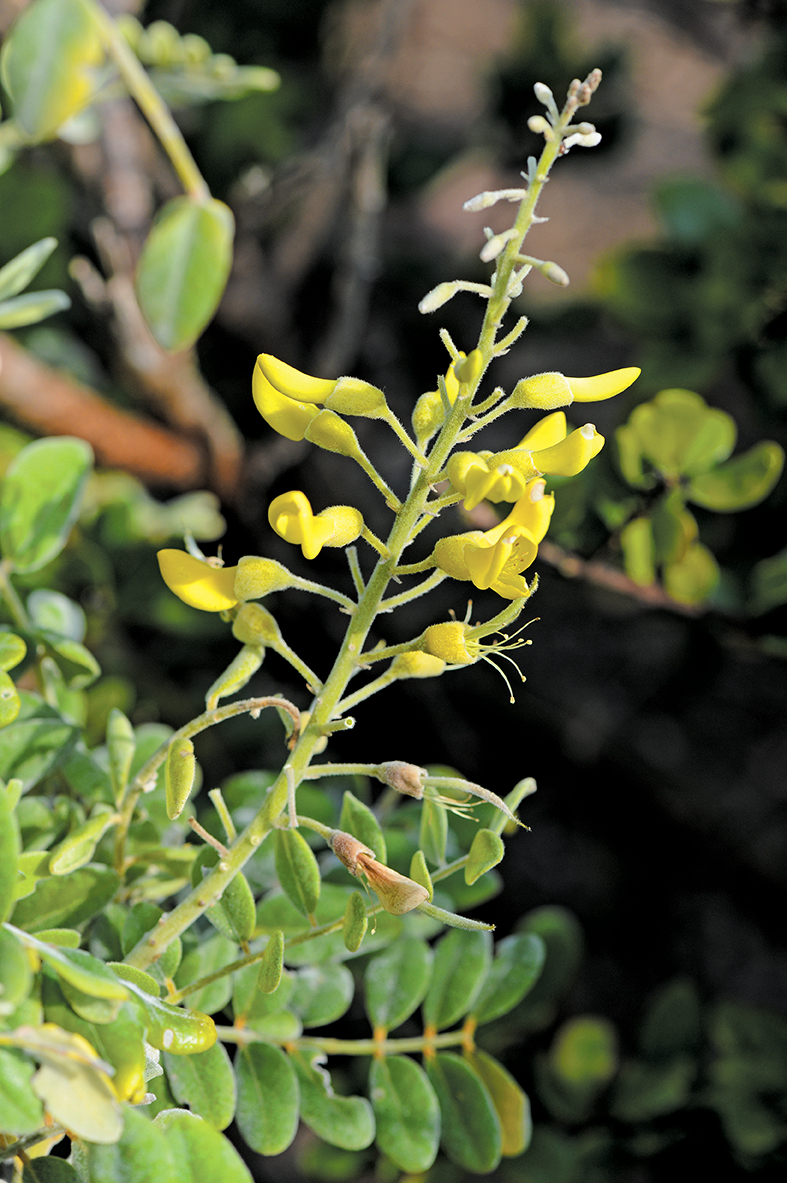 The necklace pod is another yellow bloomer.

Walking north along A1A (South Ocean Boulevard) from East Atlantic Avenue in Delray Beach, you’ll find your view of the ocean blocked by towering sea grapes. Now keep strolling north a few blocks to about Sea Spray Avenue and then look seaward.
The only things that may obscure your view of the water from here are the dunes covered with sea oats waving in the breeze. Sure, you’ll see some sea grapes. But here, instead of blocking your view, they grow only thigh-high.
“There are several things happening here, but you are going to have to look for them,” said dune biologist Rob Barron, who is consulting with the city to bring the beach back to the way it appeared in historic photos from about 100 years ago.
“Those pictures are our models,” said Barron, who hopes to heal many of the indignities the beach has suffered over the years — including being virtually washed away and, after a renourishment project, being planted with invasives.
Since 2000, Barron has overseen the work of city-hired contractors who have removed the coin vines and Hawaiian sea grapes that were crowding out the natives. And he’s worked to keep the native sea grapes under control, too.
Although many people assume sea grapes on the beach should grow tall and thick to hold the sand in place, Barron has done research that shows that before man had his way, sea grapes along the coast of Florida were kept pruned by periodic freezes that killed the trees and hurricanes that quickly overturned them with their shallow root systems.
But as man brought development, beach temperatures rose and freezes rarely decimated the trees.
Thinking he was doing nature a favor, man protected the sea grapes, letting them block the sun and preventing other important plants from growing beneath them.
By keeping the sea grapes trimmed, Barron has opened the beach to a whole new population of native plants, including 50 native species he’s planted and 50 others that have volunteered since the dunes have started healing.
For his work he’s searched rare and endangered species of plants that would have been prevalent on our beaches in the early part of the last century.
“Because we know this beach will not be developed, one of the things we do is to put back populations of plants that we know are at risk in other areas,” Barron said. It not only shows off the plants in their prime but acts as a seed incubator for other projects.
Continue your walk along the street and you may find some beach cluster vine with its tiny white flowers. It’s on the federal endangered species list and this is one of about only 10 places you’ll find it growing in the U.S.
You’ll also see that it’s the saw palmettos, not the sea grapes, that are being allowed to grow tall here because they can remain standing in a storm and they don’t cast wide shadows.
Turn down one of the sandy access paths to the beach and you may also discover beach ragweed covering the dunes or dune sunflowers waving their blooms that look like black-eyed Susans.
You are probably familiar with the red- or green-tipped varieties of coco plum growing in so many Florida landscapes. But the variety you’ll find here is called horizontal coco plum.
It evolved in coastal areas where for thousands of years it was wind-pruned and any stem that stuck up got burned off, so the plant learned to grow in a decumbent position, Barron said.
Keep an eye out for cardinals, blue jays, seagulls and other shore birds. Oh, and don’t forget the lizards and snakes. Barron has seen nonpoisonous ring necks and black racers. He welcomes them as a sign that this habitat is healthy for both native flora and fauna.
“We are writing the book on dune science right here in Delray Beach. What we are doing is recognized nationally as ground-breaking,” he said.

If You Go
The Delray Municipal Beach runs for 6,840 feet along South Ocean Boulevard (A1A) from Casuarina Avenue and the Seagate Beach Club north to the first beachfront home. The most mature section of renovated beach can be seen north of Sea Spray Avenue, with street parking available. The section around East Atlantic Avenue is slated to be restored within the next year. (An aerial view of the beach is inset into the story above.)

Deborah S. Hartz-Seeley is a master gardener who can be reached at debhartz@att.net.