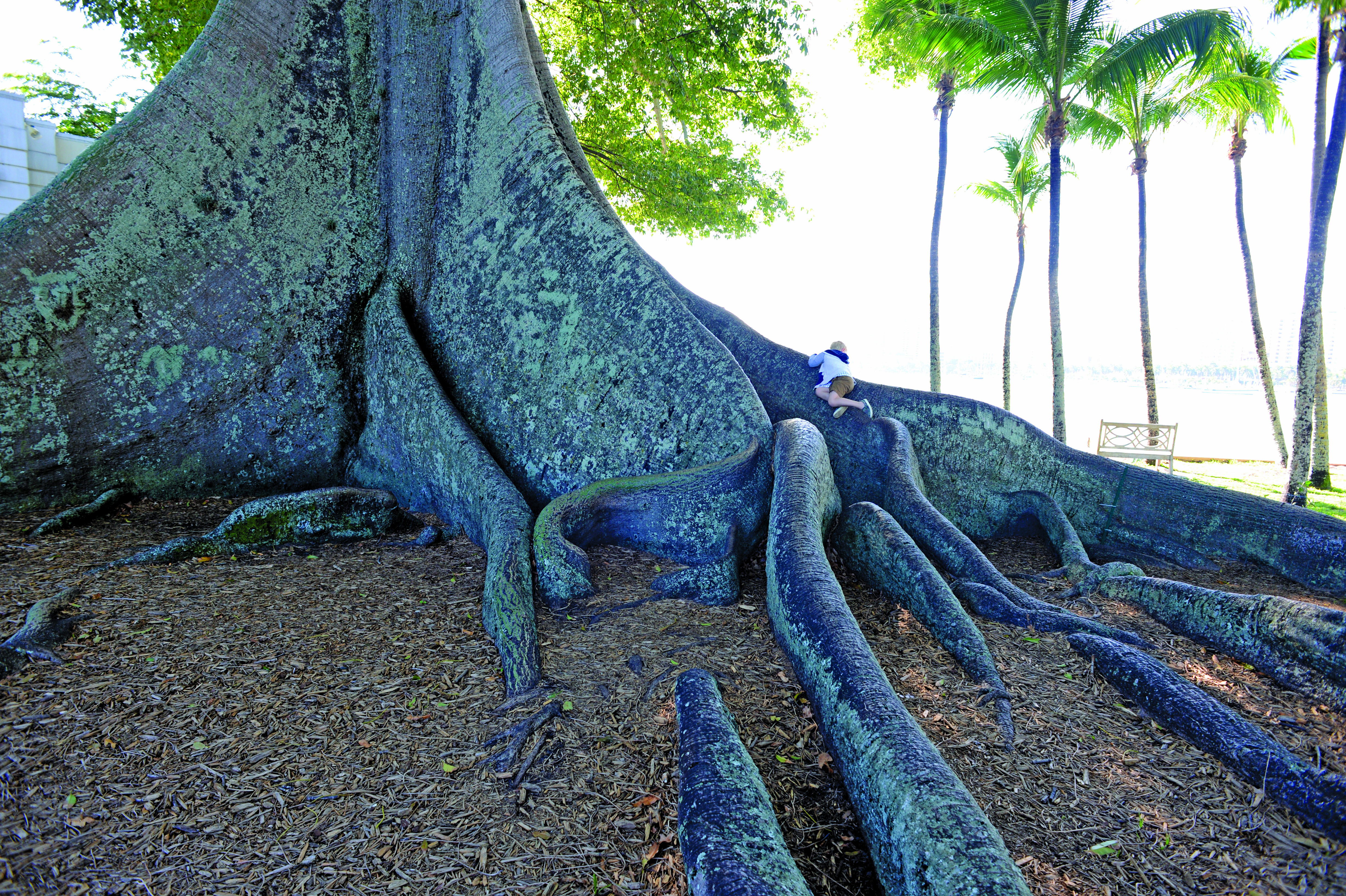 The Olivia Kiebach Garden is a delight to visitors from any angle. Here, a child is dwarfed by the hugh buttressed roots of the kapok tree. Munching on the leaf of a milkweed, these caterpillars will mature into monarch butterflies. 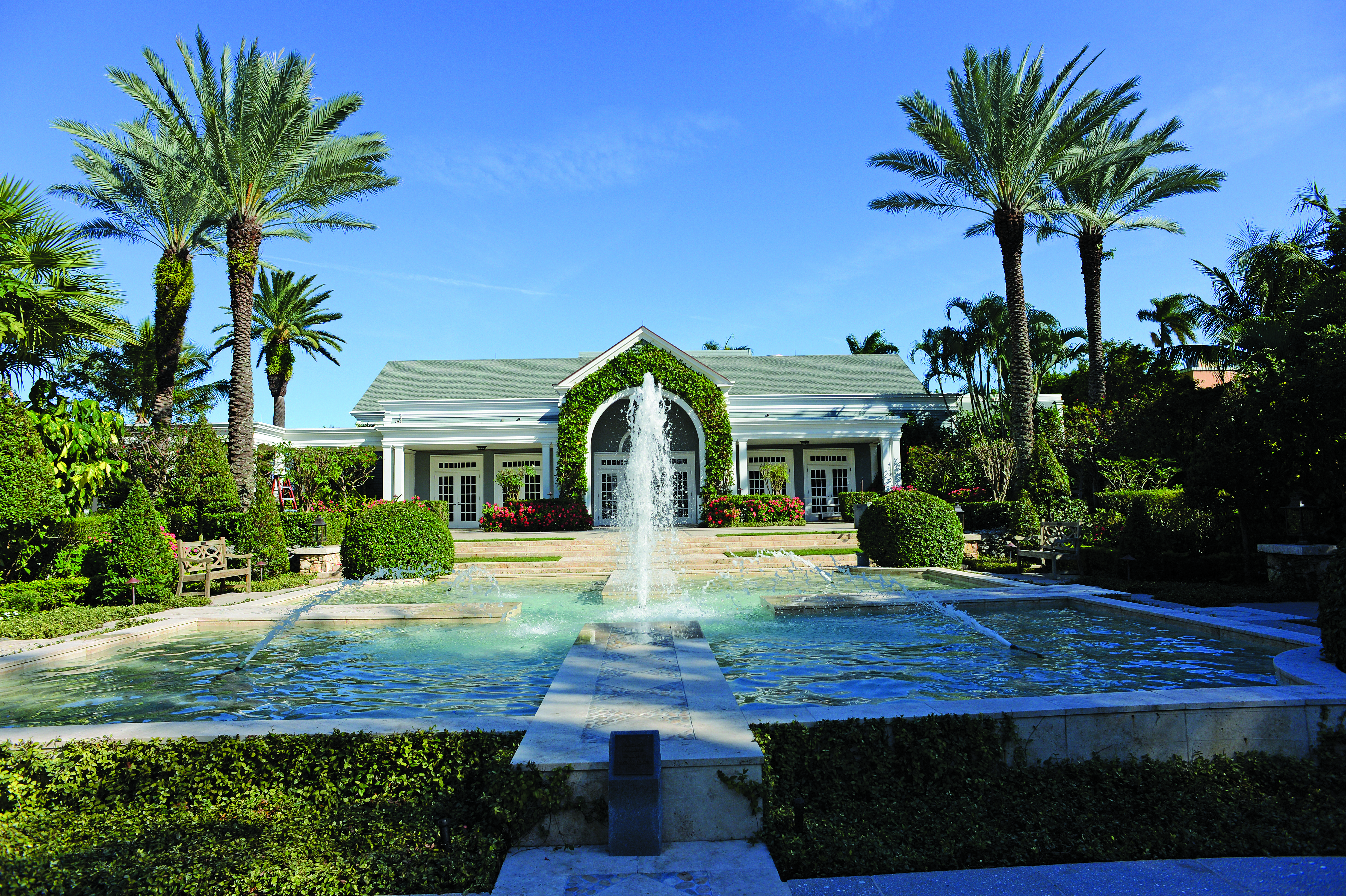 Four water sprays and a central water spout create a beautiful water feature between the chapel and the Intracoastal Waterway.

If you head south from the Flagler Museum in Palm Beach, taking the waterfront Lake Trail, you’ll soon arrive at the Olivia Kiebach Garden.
And you’ll know it when you see the towering kapok tree that bursts into full red bloom as the spring approaches.
It stands sentinel over a sweeping expanse of lawn leading up a gentle slope and the garden itself. Here, three richly landscaped terraces sit behind the Royal Poinciana Chapel that opened in 1895 on land donated by Henry Flagler.

“For this garden, I wanted to create a multi-use space that is broken up into private areas that people can enjoy for relaxation and contemplation,” says landscape architect Mario Nievera, who volunteered his time for this community project. “There can be a lot of activities in this one space but nobody need feel like they are on top of each other,” he adds.
When he first started working on the garden in 2010, there wasn’t much here but St. Augustine grass, eight date palms that he moved to new locations and, of course, that famous kapok tree that probably was collected by Flagler who lived just next door in Whitehall, his Gilded Age estate.
For the garden, Nievera chose low-maintenance and drought-resistant plants such as the Thai hybrid crown of thorns that has oversized coral and pink flowers. He avoided annuals that would have to be replaced.
Instead he chose natives such as sea grape, cocoplum and pigeon plum trees, as well as exotics such as hibiscus and pink razzleberry that add color year-round.
Spherical topiaries are fashioned from Green Island ficus trees, and the Japanese blueberries are carefully trimmed into conical shapes that help bring a sense of order to an otherwise lush landscape.
To attract butterflies and other bits of nature, Nievera — who co-owns the firm of Nievera Williams Design in Palm Beach and New York —  chose plants such as milkweed, red jatropha and yellow cassia trees.
But you won’t hear much from the birds and the bees as the air is filled with the noise of a powerful stone fountain that has four water sprays set in obeisance around a central water spout.
Much of the stone used in the fountain and the garden is either from Florida or at least made here, including the cast stone with shells imbedded, the small gray bricks and the coquina used in the stairs.
For those who have trouble climbing stairs, a system of hidden side pathways offers easy access to any part of the garden. And as you walk these paths, you’ll find low-maintenance concrete benches that actually look like they are made of wood tucked in among the plants.
Sit for a few moments and enjoy the view down to the moored  boats in the Intracoastal Waterway and across to the West Palm Beach skyline. It just doesn’t get prettier than this.
And for those who arrive by car, don’t miss the small garden at the back of the parking lot that leads to the historic Seagull Cottage. Erected in 1886, this is the oldest house in Palm Beach. Today it serves as the Parish House for the Poinciana Chapel.
Here Nievera has planted fakahatchee grass, cardboard palms, crinum lilies, pigeon plums, coconut palms and plenty of orange-flowered firebush. He believes these would have been in the garden when the gray-shingled cottage was built and later sold to Flagler in 1893.