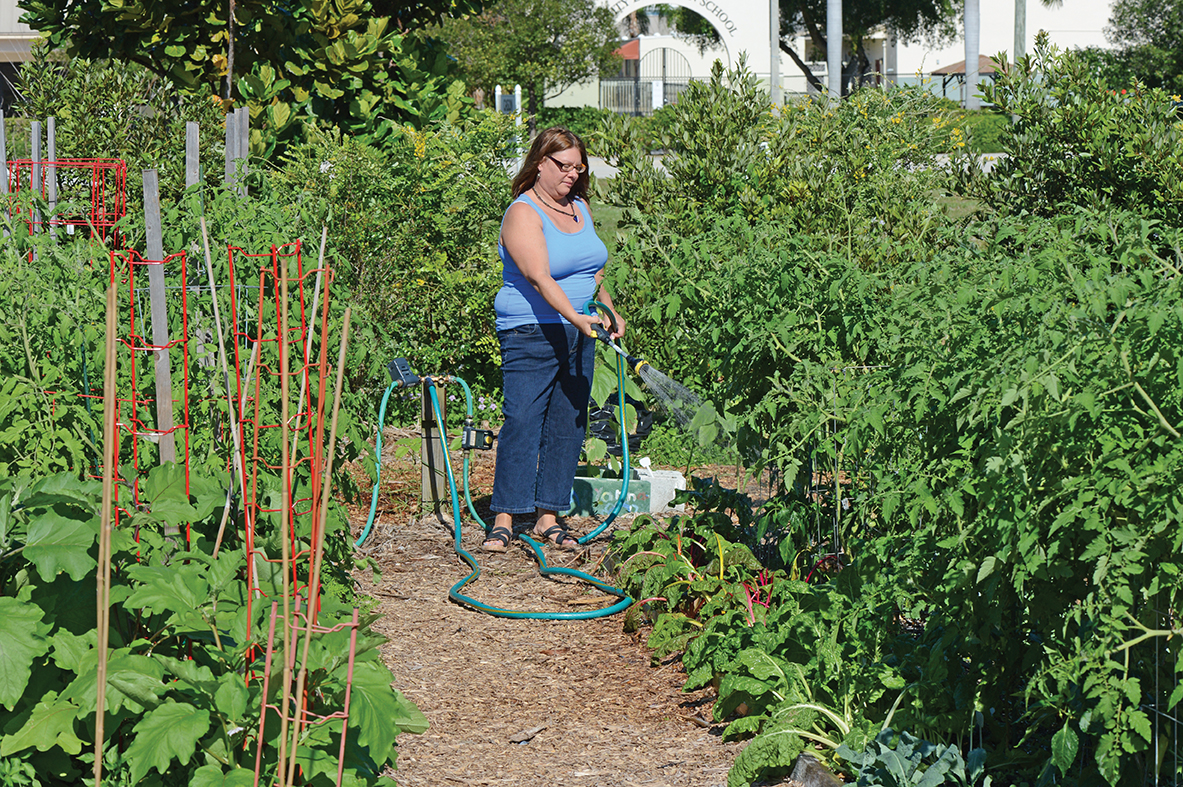 Candy Evans waters her plot at Cason Community Garden. She and a friend got the garden started

It’s early on a rainy weekday but that doesn’t keep Rob Sparro from inspecting the curly kale and tomato vines thriving in his well-tended plot at the Cason Community Garden in Delray Beach.
He bends over to shake his bean vines to remove the water that is weighing them down. As he does, you can see the delicate white blooms that will soon be beans ready for harvest.
Elsewhere in his bountiful garden bed, purple blooms turn into white eggplants, some of which hang from stems like Christmas tree ornaments.
“There’s good unity and fellowship in working here and putting things in the ground,” says Sparro, who used to be in the landscape business.
Nearby, Abbey Weiss untangles her tomato vines and looks for a ripe fruit so I can have a taste. She, like me, is a transplanted New Jersey girl who knows a good tomato. As she hands me a small yellow orb, she invites me to enjoy this “mouthful of sunshine.”
Sweet and juicy it truly is.
“Gardening is a great way to connect with the community and the earth,” says Weiss. “It’s satisfying to grow food that you can eat and give to others.”
Since the garden’s inception, participants have been donating at least 10 percent of their harvest to Caring Kitchen in Delray Beach, which feeds the poor. Over the years the gardeners have contributed more than two tons of produce.
From the neatly mulched footpaths, to the wood-defined beds tended by dedicated members, to the bountiful crops, this is a model community garden. But getting here has been a journey.
It started in 2007 when Cason United Methodist Church was struggling to bring people to its ministry.

“We were in a big decline and brainstorming about how to resuscitate our church that was on the edge of being closed,” says Candy Evans, who has been coming to Cason United since 1993 — when she was a new mom of triplets and the women of the

church rallied to help her.
Today she is here with her 1-year-old granddaughter, Lilly Denhart, who gleefully fills her stroller with mulch gleaned from the paths.
It was Evans who got to thinking about the five grassy acres sitting next to the church. “For 40 years nothing had been done with them,” she says. And that’s when she had her “light bulb moment.”
Evans, with her friend Lori Robbins, got the garden off the ground by rounding up donations of compost, weed cloth and a sign. It was Evans who brought a hose from home.
In 2008, they opened the garden to 20 members who first planted vegetables in the designated 2,500 square feet. “The rest is history,” says Evans. Since then the garden has doubled to include 40 gardeners and 5,000 square feet of land.
“Everyone is welcome,” says Evans.
The garden members range from children who are being home schooled, all the way up to seniors such as Mable McDonough, 88, who has been with the church since 1948. She had never gardened before she played in the dirt here at the community garden.
“The garden is not only a real source of joy for our church community, but anyone can get their hands dirty in our plots,” she says. She shares her plot with the Rev. C. Alexis Talbott.
Michael Lorne, owner of Lorne and Sons Funeral Home in Delray Beach and a master gardener, has been involved since the beginning.
Each gardener is supplied with a planting bed filled with rich, dark compost and a spigot for water. To be sure new participants get off on the right foot, Lorne uses his gardening skills to provide a one-on-one introductory session.
“This garden is a great way for us to connect with the earth, our spirituality and our community,” says Evans.

Delray Beach Children’s Garden, the first of its kind in Palm Beach County, opens Jan. 3 in downtown Delray Beach. A year in the making, the garden, a 501(c)(3) nonprofit project, was planted by children as well as civic leaders, landscape designs and horticulturalists. The grand opening, from 11 a.m. to 2 p.m., is free.
The garden is at 137 SW 2nd Avenue in Delray Beach.
For more information, call Shelly Zacks at 561-716-8342.

Deborah S. Hartz-Seeley is a certified master gardener. Reach her at debhartz@att.net.