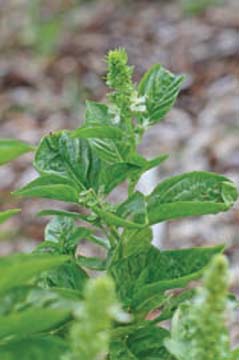 A vining sweet potato already is in bloom. 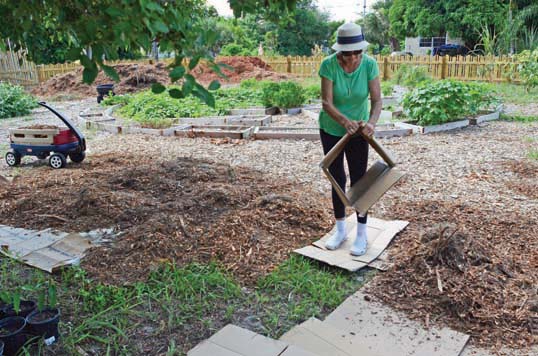 Jeanne Fernsworth lays cardboard to be covered with mulch.

Where today you see a pile of mulch, Shelly Zacks envisions Mulch Mountain covered with climbing kids. That nearby hole in the ground will one day be an enclosed habitat for water plants and fish. And the raised beds overflowing with sweet potato vines will be tamed and planted with a variety of vegetables including collards, kale and peppers.
Welcome to the Delray Beach Children’s Garden that, as you can see, is a work in progress.
Zacks, the garden team leader and a preschool teacher herself, always dreamed of creating a “place where children are immersed in nature, love it, not want to leave it and tell their parents they want to come back.”
Her dream began to take shape in early 2014 when St. Paul’s Episcopal Church offered a half-acre of land for $10 a year. The same day she signed the lease for the use of the land, the project was awarded a $5,000 county grant.
“Everyone involved agreed that this children’s garden should be designed and created by the children themselves,” says Zacks, who believes many young people suffer what’s been called “nature deficit disorder.”
To do this, the steering committee hosted a design brainstorming session to which they invited local parents, landscape designers, city officials and educators who were tasked with building model gardens from pipe cleaners, clay and other craft materials. Then a “surprise panel of judges” comprised of a dozen youngsters ages 7 to 17 critiqued their work.
“They were so verbal and so critical. They had wonderful ideas,” says Zacks.
A landscape designer took the winning ideas and put together a plan that’s being brought to fruition by volunteers who have been working at the garden on Saturday mornings since February.
“None of the work is being contracted,” says Zacks, who praises the community for its generous donations of time, money and materials.
Using a permaculture technique, the grass has been covered with cardboard and mulch that will help create a first layer of soil as it decomposes.
The plot has been cleared of invasive Brazilian pepper trees so now you can see there are four towering turpentine mangos destined to shade a triangular sandbox.
They’ve planted a chocolate tree, lemon bay and cinnamon tree. And they can’t wait until the loquat, jaboticaba and longan bear fruit and the stemmadenia tree blossoms with its fragrant white flowers.
There’s even a peanut butter plant whose red fruit tastes something like, well, peanut butter. Nearby blackberries grow and muscadine grapes will be planted so the children can enjoy a very natural PB&J.
Cotton and henna plants are just the beginning of a craft garden. Echinacea, aloe, ginger and chamomile form the backbone of a medicinal plot.
A small square of sunflowers is destined to grow into “walls” and be topped with morning glory vines that will form a “roof” for the garden’s Sunflower House.
A stand of thriving banana trees forms a banana forest where children can hide and seek. And an Eagle Scout troop has built above-ground planters arranged as a labyrinth. It’s these that currently are overgrown with sweet potato vines. The garden is slated to open to the public Nov. 9 when there will be a Harvest Festival. By then these raised beds will be neatly planted, weeded and ready for harvest.
“It will be so much fun for the kids to pluck food from the ground like buried treasure,” says Zacks, who, of course, will be there celebrating, too. 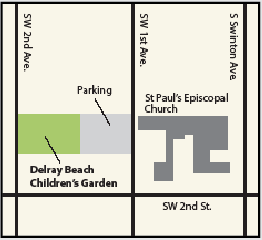 The west side of the garden has a pedestrian entrance with street parking. There is a parking lot on the east side of the garden off First Avenue. Volunteers are needed 9 a.m. to noon on Saturdays. Just show up with your water, hat, gloves and sunscreen.
A Harvest Festival, the official garden opening, will be 11 a.m. to 2 p.m. Nov. 9. Enjoy vegetable harvesting, pumpkin decorating, scarecrow building, storytelling, music, food and more. The first annual fundraising Delray Beach Children’s Garden Golf Tournament will be held at Delray Municipal Golf Course in December.