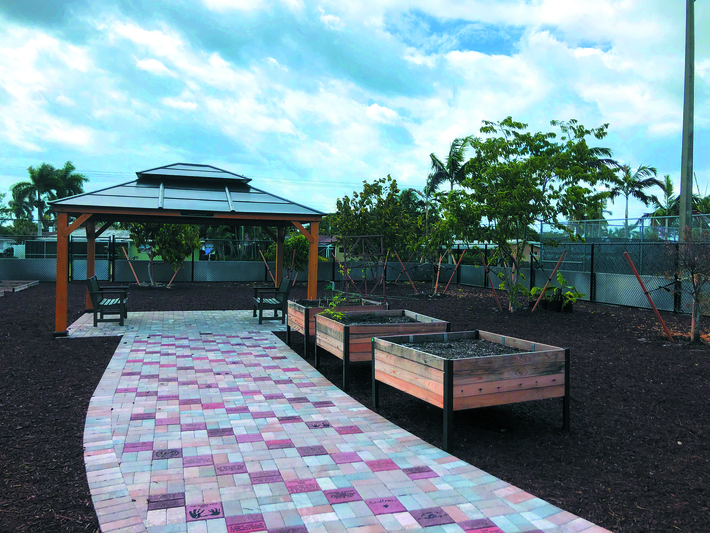 For the past 10 years, the popular garden thrived between the Downtown Library and where the railroad tracks are today. But when Brightline expressed interest in the location for a new station, the city was amenable.

And that’s when it offered the Junior League of Boca Raton, which sponsors the garden, an alternate 1.4-acre site in Meadows Park.

“In the heart of Boca Raton, it’s a great location for our new garden,” says league President Jamie Sauer.

On May 10, league members broke ground and by September, they had the wood-lined and soil-filled garden boxes ready for renting.

Neighbor to the Boca Raton Middle School, the garden has plenty of parking and is easily accessible to the students with whom the league women hope to team up for nature classes. A white walking bridge conveniently leads to homes in the nearby community. And a park pool attracts people to the area.

And, of course, the new location near a canal is in a prettier spot than the old one. But that comes with a caveat: Although the water attracts birds and other desirable wildlife, it also draws iguanas.

This is a concern for garden co-chairwomen Melanie Kamburian and Bridget Landford, who wonder whether the herbivorous lizards will chow down on the squash, eggplants, lettuces, herbs and other crops beginning to take root in the garden beds.

But a chain link fence with its lower portion covered in sheet metal extending 2 feet into the ground surrounds the garden in the hope it will keep the iguanas at bay.

“We urge people to keep the gates closed. And so far, we haven’t seen any in here,” says Landford, pointing to a sizable iguana on the canal bank outside the fence.

Since groundbreaking, workers have built 97 garden beds sized from 4-by-4 feet to 4-by-12 feet. Three of the boxes located by the garden gate along a brick path are raised a few feet off the ground to make them ADA accessible.

To make the garden feel more settled and honor its past, a number of items have been relocated from downtown. These include memorial benches and engraved bricks used in both locations for pathways.

Brightline also facilitated the move of mature fruit trees including two carambolas, a mango and a sugar apple to a spot just inside the fence. And the company arranged to relocate palm trees including towering coconut palms that shade a new mulch path along the canal.

It leads from the fenced garden to an area that will become a pollinator garden in phase two of the garden’s development, says Kamburian. Live oaks and a gumbo limbo also were relocated to provide shade to those who will want to watch the butterflies and bees at work.

On this sunny Sunday morning, Kamburian and Landford welcome gardeners to their plots. There’s the young boy with his parents who sticks a blue and silver pinwheel among the seeds he helped sow to deter birds from eating them.

A woman who just signed up for her plot is watering the soil to prepare it for planting. She hopes to grow vegetables and flowers. And as someone who eats healthy food, she’s glad the garden is organic.

Elsewhere an ambitious couple comes to see whether their watermelon, parsley, roselle, cucumbers, carrots, rainbow chard, leeks or cherry tomatoes have sent up shoots. One of them discovers her lemon balm is doing well and takes a few leaves to flavor her drinking water.

And then we meet Kristina Bergman with her partner, Mitzy Sosa, both of Delray Beach. Joined by Sosa’s sister Kimberley, they are busy planting their small plot for the first time.

“My work involves food but I don’t know much about growing it,” says Bergman, who is a registered dietitian.

Sosa, also a novice, has good advice for all the beginners: “I think to really learn, you have to get your hands dirty.”

Deborah S. Hartz-Seeley can be reached at debhartz@att.net when it’s too hot to be in the garden.

If You Go
What: Junior League of Boca Raton Community Garden
Where: Recently relocated to Meadows Park, 1300 NW Eighth St.
Garden features:
• The garden is organic and growers are asked to donate 10% of their crops to Boca Helping Hands; www.bocahelpinghands.org.
• Garden plots come in 4-by-4 foot, 4-by-8 and 4-by-12 sizes, ranging in price from $45 to $110 for use during the 2021-22 growing season. They are available to residents and nonresidents; the city provides water for irrigation.
• You also can donate an engraved brick ($100 to $250).
Information: To ask a specific question, email
Garden@jlbr.org. To sign up for a garden plot or brick, visit www.jlbr.org/public-store.