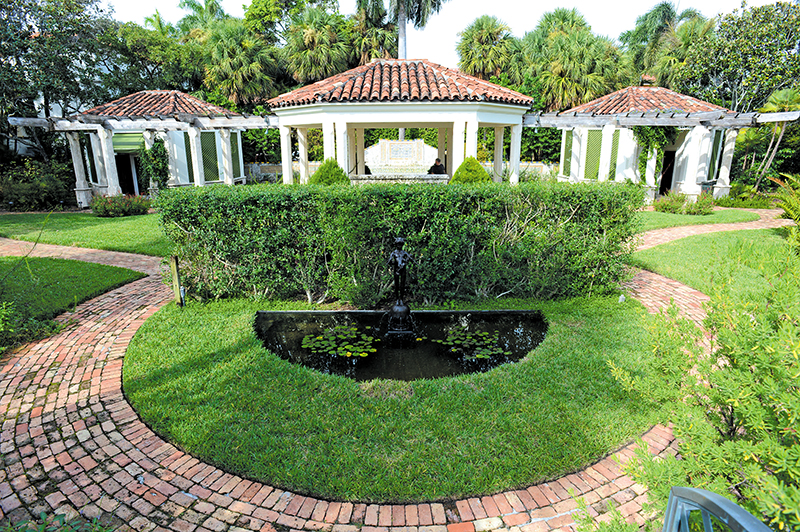 On Nov. 23, Pan’s Garden in Palm Beach is celebrating its 25th anniversary amid a change in its director of horticulture, a cleaner and fresher look and a greater use of native plantings than ever before.

“The garden is 100 percent native,” says Susan Lerner, the director of horticulture appointed about a year ago by the Preservation Foundation of Palm Beach, which owns the half-acre garden.

It is set on land that, once having held a derelict house and parking lot, was originally designed to be “a quiet oasis showcasing native Florida plants,” according to an early brochure.

But it’s that and more, says Lerner. “It’s also a botanical garden that is meant to be a learning garden so people can come to see what the native plants look like and determine which they want to put in their own gardens.”

In preparation for the anniversary, the statue of Pan, the mythical half-boy, half-goat for whom the garden is named, has had its original patina lovingly restored. Pan once again stands invitingly in a semi-circular pool at the garden’s entryway, charming water-spouting fish at his feet with his pipes.

Desiring to honor the garden’s original vision, Lerner is working to rejuvenate what she inherited. Over the years, non-natives had crept into the mix, some areas had become overgrown and the few really sunny parts of the garden had often been used for plants that survive equally well in partial shade.

Her sweat and labor are already evident as you wander through the marsh and upland habitats that make this garden special. With Lerner leading the way, we follow the brick path to the man-made pond that fills the northern section of the garden.

We enter an area that Lerner explains was partially covered with invasive ferns. After checking with the fern expert at Fairchild Tropical Botanic Garden in Coral Gables to identify which were invasives, she removed them. 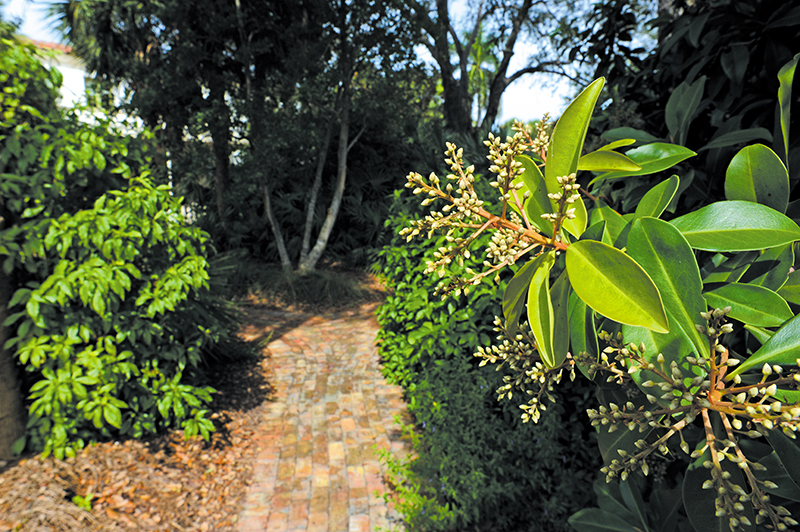 Buds are ready to bloom on a marlberry plant.

But she left the natives such as the lattice vein ferns with their rolling leaf edges and the giant leather ferns with under-leaves that get so covered in spores that they feel and look like they are lined with rust-colored suede.

Elsewhere the native Walter’s viburnum had been pruned into a perfect sphere. That type of pruning has been abandoned because it’s Lerner’s belief that trees and shrubs should be pruned only for size and to keep them looking trim. She often goes out with clippers to do the work herself.

Otherwise, “a tree should be allowed to grow as it would in nature,” she says.

As she details her efforts to refresh this charming yet educational garden, Lerner tells us that when she arrived for her job interview there was nothing flying — no birds, no bees, no butterflies, no dragonflies.

“We can fix that,” she thought to herself.

Today she points to a large area of coontie, a native cycad with a fossil history that dates back 3 million years. It is the sole host plant for the black-and-orange atala butterfly. A soldier butterfly feeds on the blue blooms of a Keys ageratum.

She learned that the garden was being sprayed with pesticide that would prevent the atala and other butterflies from successfully using its plants to host their eggs and support their life cycles.

Lerner immediately canceled the spraying contract, and today the garden is filled with these butterflies and other beneficial insects.
As you stroll the paths, you can’t help but notice how just about every area of the garden has benefited from her touch. Consider the sunny southern border that, even at only a few inches of elevation, is considered part of the uplands habitat.

“This was a bramble filled with many non-natives. It wasn’t possible to walk through here,” she says.

Today it is an open and airy walkway that you enter between a pair of handsome Simpson stoppers. The path is lined with beautiful but lesser-known native wildflowers such as Havana skullcap, tea bush and coral bean. And this once uninviting area, like many places in this garden, is filled with butterflies and other flying attractions.

“I want this to be the go-to native garden in Florida so people learn that planting Florida natives is not only the right thing to do to support native wildlife but also to provide a beautiful experience,” Lerner says.

If You Go
Where: Pan’s Garden, 386 Hibiscus Ave., Palm Beach
Hours: 9 a.m. to 5 p.m. daily; closed during maintenance and private events.
Admission: Free
Anniversary celebration: From 10 a.m. to 5 p.m. on Nov. 23, Pan’s Garden will host activities and educational programs for children and adults, including origami making, a scavenger hunt, butterfly plant tours and birding with binoculars.
The celebration will include, at 10 a.m., the garden’s rededication; 10:15 a.m., yoga; 11 a.m., a presentation on the garden’s participation in the Pine Jog Native Orchid Program; and at 4 p.m., a talk about the creation and impact of Pan’s Garden.
More info: Call 832-0731 ext. 113 or visit https://palmbeachpreservation.org/visit/pans-garden
Volunteer: Volunteers are always welcome. For information, call the garden.