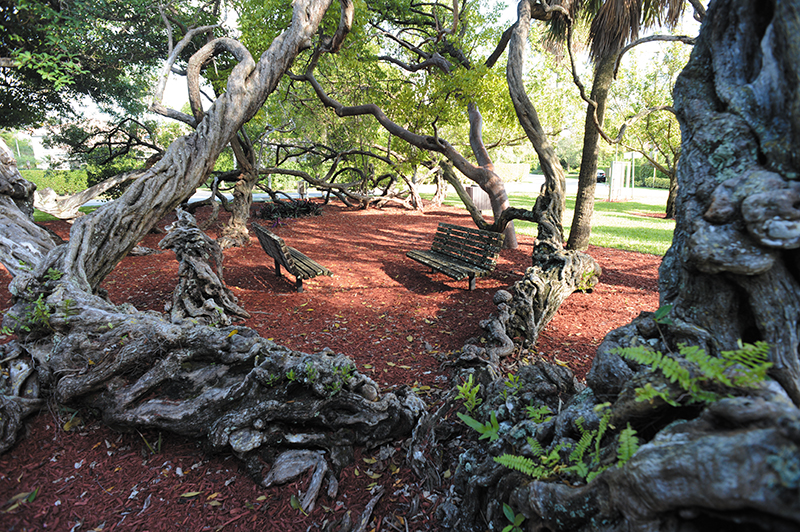 The twisted trunks of the buttonwood make a scenic surrounding for a pair of benches. Jerry Lower/The Coastal Star

Por La Mar Park in Boca Raton is known for its large gnarly and sprawling southern buttonwood tree. In 1992, the tree received the city’s historic designation for its “landmark significance as well as its historic association and specimen quality.”

The park also recently received an award from the Boca Raton Beautification Committee. “We felt the tree had character and had lived so long that it and the park around it deserved recognition,” says Jo-Ann Landon, past president and longtime committee member.

Today, with its horizontally growing trunk and gnarly bark, that buttonwood remains a testament to the artistry of Mother Nature.
It’s so picturesque that it is often used as a backdrop for graduation and wedding photos, says Samantha Griffin, a records and customer service specialist for the city who lives nearby.

The sprawling tree is set in a traffic circle defined by three neighborhood streets. “When I drive by and see that park, I take a deep breath and think, I’m home,” says Griffin.

A historical photo from the 1920s shows three women lounging under trees in this area that would later become the park.
“It shows us that Boca Raton’s pioneers knew about this spot. It was probably a nice place to get some shade away from the beach,” says Susan Gillis, curator of the Boca Raton Historical Society and Museum. 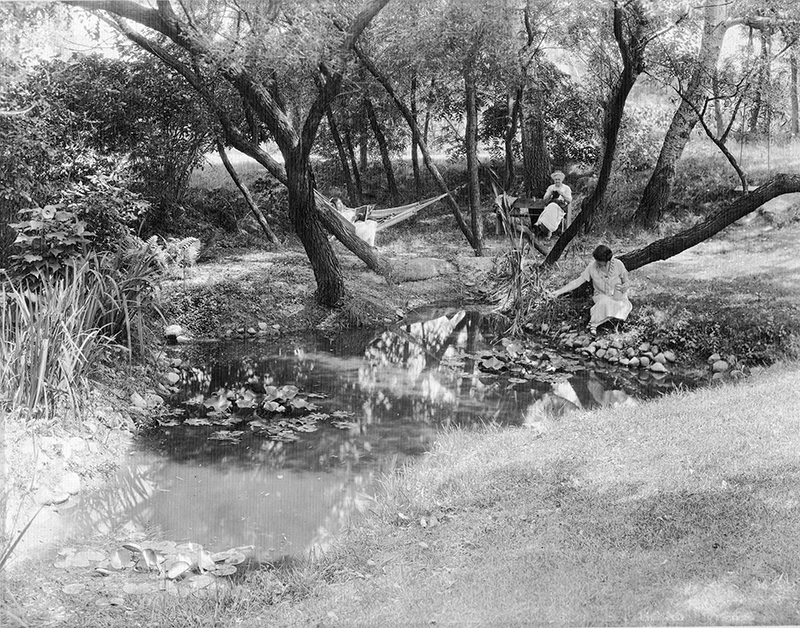 Women lounge among the trees in 1928 when the park area had a small pond. Photo provided by the Boca Raton Historical Society

Even today visitors are discovering this tiny park’s attractions.

James Rosenberg, 27, of Delray Beach and Karen Restrepo, 26, of Fort Lauderdale have ridden their bikes through the Por La Mar area for over a year.

But only recently did they discover the spreading buttonwood in a ring of strangler figs, sabal palms and some smaller buttonwoods just starting on their growth journey.

The first thing this duo did, after getting off their bikes in the park, was to gently climb the historic buttonwood that creates a natural jungle gym.

Although this tree looks unique, Dawn Sinka, horticulturist/arborist for the city of Boca Raton, explains that this is a natural growth pattern for this species.

She adds that the buttonwood naturally has a vase shape with drooping foliage. But when the foliage touches the ground, as it does repeatedly in this park, the tree begins to grow upward again.

And of course, the force of wind and storms have influenced how this tree has grown.

“Certainly, anyone who stumbles across this tree can’t help but be impressed,” Sinka says.

This .3-acre park and its character tree have been a meeting place for generations of Por La Mar residents, including William Wear, 72.

He lives in the Por La Mar house his grandparents built and where he visited them as a youngster. He remembers the nearby park as a “magnet” for him and his friends, who would climb in the tree.

“Even today, the park is a hidden gem,” he says.

In order to have a buttonwood tree that grows straight to the sky on a single trunk, it requires pruning and multiple staking periods, especially during storms. But even when trained to grow straight, the tree has a tendency to lean and droop.

You can see some of these straighter buttonwoods growing along Via Cabana and on Northeast Sixth Drive in Boca Raton between Northeast 32nd Street and Spanish River Boulevard.

— Dawn Sinka, horticulturist/arborist for the city of Boca Raton

Where: Por La Mar Park is set in a quiet traffic circle created by the coming together of Palm Avenue, Park Drive West and Southeast Olive Way in Boca Raton. It’s just west of A1A and south of East Palmetto Park Road. There is no designated parking.