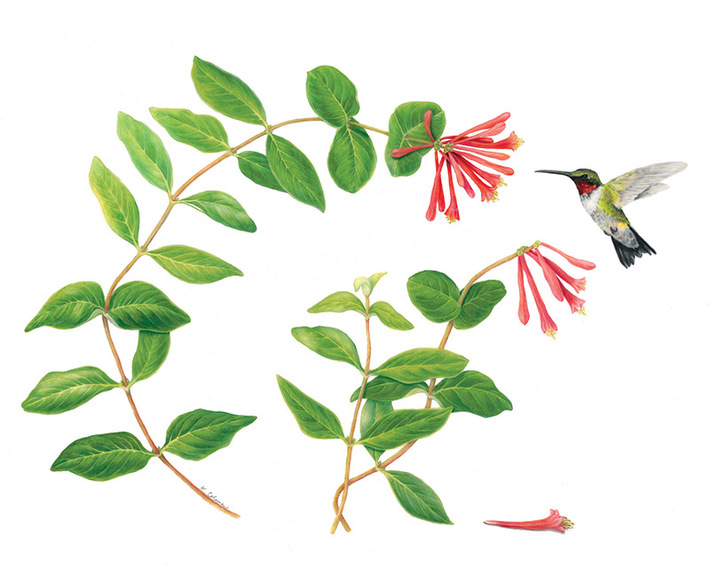 Both nature enthusiasts and art lovers will find plenty to enjoy at the Preservation Foundation of Palm Beach through April 30. That’s when the foundation — known for celebrating the architectural, botanical and cultural heritage of Palm Beach — is hosting “Wildly Exquisite: Florida’s Native Plants.”

“It’s an art show that features 34 botanical works depicting native Florida plants that are often cultivated in gardens,” says artist Carol Woodin, who helped curate the show and is the director of exhibitions for the American Society of Botanical Artists.

But this indoor event is only the beginning.

Once you’ve seen the realistic and detailed artworks demonstrating the intricacies and nuances that make Florida’s native flora so attractive, you can step outside into Pan’s Garden, which is owned by the foundation.

Here, in Florida’s first all-native botanical garden, you can see how more than a dozen of the show’s subjects put down their roots in nature.

“The exhibition is a useful tool to get people engaged with native plants and to understand their importance,” says the foundation’s director of horticulture, Susan Lerner, who oversees Pan’s Garden.

To help, she has carefully labeled the plants shown in the art that also appear in the garden.

During judging of 86 entries for the show, Woodin instructed the four judges, including Lerner, to look for works that provided botanical accuracy, were pleasing to view and whose artists showed proficiency of technique strong enough to make accuracy possible.

“Artists need to take into consideration elements of both traditional artwork and science. Botanical art is a melding of the two,” says Woodin.

For example, Karen Coleman’s entry called Mutual Attraction depicts the tubular red flowers of the honeysuckle plant that will nurture a hovering hummingbird preparing to sip their nectar.

Outside in Pan’s Garden, that same honeysuckle drapes over a wall — adding color, life and, yes, hummingbirds to the curated space. Another Florida native, the Southern Magnolia, in a classic botanical illustration by Charlotte Ricker.

Other artworks provide an in-depth look at their plant subjects. Consider the Southern Magnolia, by artist Charlotte Ricker. She not only skillfully reproduces the plant’s lush white flowers but also the progression of those flowers from bud to ripened fruit. You’ll even see the green beetle that is the magnolia’s main pollinator.

“All those details that the botanical artist selects to portray must be accurate,” says Woodin. “You can’t fudge things.”
That’s why you’ll come away from a study like this really knowing something about the magnolia, which also grows in Pan’s Garden.

Just remember that although all the plants depicted in this show are Florida natives, many also grow in other areas of the country and the world. And not all of these plants are native to South Florida.

Consider Ashe’s Magnolia, for example. Its pink-tinged white flowers have been boldly reproduced for the show in etching techniques by Monika deVries Gohlke.

Listed as endangered by the state of Florida, this magnolia is native to only a few steep-sided ravines and bluffs in Florida’s Panhandle, according to informational notes written by Lerner.

Although it can be grown in gardens from seeds provided by permitted nurseries, you won’t find it in Pan’s Garden. However, its unique beauty deserves a place in this show.
By viewing these plants up close in the artwork, away from the green background of other plants you have in a garden, you may come to understand that natives tend to be smaller and less showy than the exotics from China and Africa. But they are no less beautiful, their details worthy of appreciation.

“I hope they inspire you to plant natives in your garden,” says Lerner.

IF YOU GO
What: “Wildly Exquisite: Florida’s Native Plants” botanical art show plus Pan’s Garden.
Where: Art show at Preservation Foundation of Palm Beach, 311 Peruvian Ave.; Pan’s Garden is adjacent at 386 Hibiscus Ave., Palm Beach.
When: 10 a.m. to 4 p.m. Monday through Friday. Art show runs through April 30; Pan’s Garden open year-round.
Admission: Both the botanical art show and Pan’s Garden are complimentary.
Parking: On-street only.
More information: For Preservation Foundation of Palm Beach and Pan’s Garden, visit https://www.palmbeachpreservation.org/ or call 561-832-0731; for Pan’s Garden, request ext. 113.
To learn more about the American Society of Botanical Artists, visit https://www.asba-art.org/
For your visit: The “Wildly Exquisite” catalog, including 34 color plates of the show’s artworks, costs $20 at the show, with proceeds benefiting the Preservation Foundation and the ASBA. Or it can be ordered for $29.95 including US shipping and handling.
A free pamphlet with information about the art works — but with no color plates — is available to viewers at the show. Works in the show are for sale.