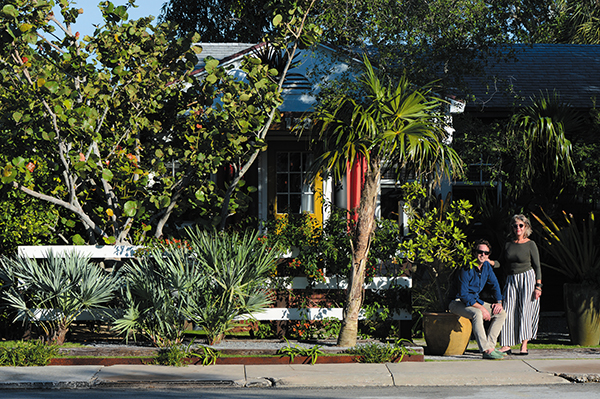 ABOVE: Silver saw palmetto and a single thatch palm define the sidewalk area in front of the Lake Worth studio of Debra Yates and her son Benjamin Burle. BELOW: Staghorn ferns and a large mirror adorn the back patio. Photos by Jerry Lower/The Coastal Star 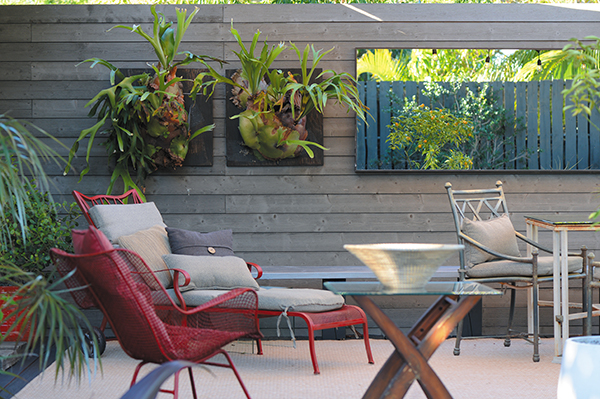 Since 2016, when Debra Yates and her son Benjamin Burle moved into Lake Worth’s Old Lucerne Historic District, they have reworked their 1945 coastal cottage — both inside and out.
This mother/son team is the creative force behind Burle Yates Design. Their signature work begins with interior design that flows seamlessly into outdoor living spaces.
Like a fine wine exhibits terroir, their designs provide a “sense of place” and time accomplished by the use of natural groupings of native plants.
“Because we use natives, not one power tool is required to care for this garden,” said Burle.
For example, instead of St. Augustine grass that needs mowing, he incorporates areas of gray granite gravel and coquina sand maintained by raking and the pulling of a weed or two.
Instead of using things such as podocarpus or trinette trimmed into hedges that require constant pruning and often become stick-filled cubes, Burle created privacy by planting a native hammock.
At their home, which was built in 1945, the hammock includes easy-to-maintain natives such as a crabwood that has grown only a foot in the year and a half it’s been there. The hammock also showcases native myrsines, Spanish stoppers and white indigo berry trees.
Besides little pruning, these also require little irrigation after the trees are established.
The field-grown sea grape on the north side of the front yard balances a towering lychee tree on the south with help from the ornamental Bahama strong bark planted in the middle.
For planting, Burle likes to use field-grown trees that often are healthier because they are grown in the ground at the nursery instead of in plastic buckets.
The towering lychee was one of the trees on the property when Yates and Burle arrived. “Otherwise it was a lot of red mulch and bad grass,” said Burle.
Because natives are known for being distinctive but not particularly showy, he adds color with a bougainvillea sporting hard-to-find coral blooms, gaillardia with red and yellow flowers and potted pink-edged bromeliads. The pot on the roof of the front porch adds a touch of whimsy.
Along the street, silver saw palmettos act as “a bold native ground cover” set in front of a cedar fence. Its 5-foot setback from the curb creates the illusion of depth in this small area.
If you are lucky enough to be a guest or take a house tour (1,000 visitors were welcomed here during last year’s Mounts Connoisseur’s Garden Tour), you may be invited into the backyard, which includes a comfortable wooden deck with bench seating. Here, two large staghorn ferns are mounted next to a mirror as wall art.
A few steps down are a patio with table seating under an umbrella and, farther back, a carport that’s been transformed into Yates’ painting studio.
When they took over the property, the backyard had a sabal palm and two mangoes. Today it’s filled with arresting natives, including the slow-growing silver palm that has green fans showing silver underneath.
You’ll also find Queen Emma’s purple crinum lilies, a yellow-flowering necklace pod tree, with seed pods that look like strung beads, and a sea plum. That’s a hybrid between a sea grape and a pigeon plum, explained Burle, who first saw one in Palm Beach.
For privacy, the backyard is surrounded by a fence fashioned from a creative mix of painted plywood, corrugated iron that was part of a water silo in Key West, a wooden gate repositioned from the alleyway, black mesh and vines.
But tour or no, feel free to visit the back alleyway. “It’s almost like a country lane,” said Yates. Although most people ignore their back entrances, Burle and Yates once again use native plantings to ensure that arriving here instills the same sense of calm, natural beauty and balance as the rest of their landscape. And, once again, it’s easy to maintain.
“We wanted to show people that no matter how big your yard, you can do amazing things,” said Yates.

If You Go
The Burle Yates Design studio and home is at 128 N. O St., Lake Worth. For information, contact Debra Yates at 305-304-8965 or debra@debrayates.com; or Benjamin Burle at 305-304-1554 or benburledesign@gmail.com.
For a look at the private backyard, keep an eye out for garden tours on which this historical home is often included.

Gardening Tip
After Hurricane Irma, I immediately started watering all the plantings. People asked me why I was adding water after so much rainfall. But it wasn’t for irrigation that I was watering. I wanted to wash the salt spray off the foliage. The salt causes it to brown. So, if you want to save your trees after a storm, you need to water, water, water.
— Benjamin Burle