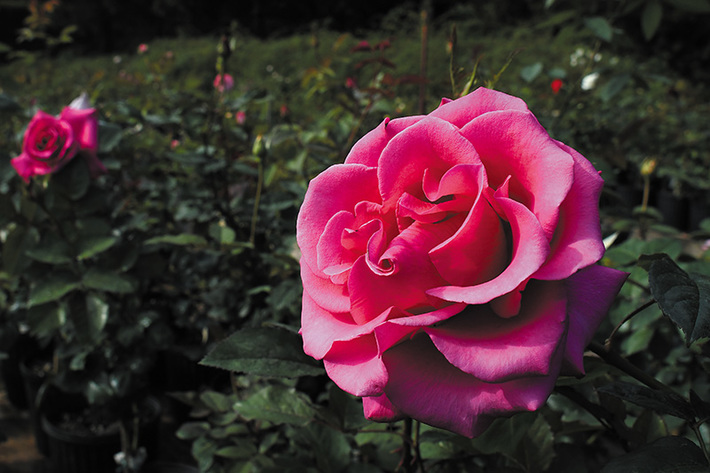 The fist-sized bloom of the Hot Princess lives up to its name. Photos by Jerry Lower/The Coastal Star

Many give or receive roses only on Valentine’s Day. But for Debbie Coolidge, they are an everyday affair. “I like going outside each morning to see what roses are blooming and enjoy my coffee,” she says.

Debbie and her husband, Geoff, are owners of Cool Roses, a nursery on 1 acre in West Palm Beach. They offer about 3,000 potted rose bushes each year that they graft, root and grow. These include more than 1,000 varieties known to do well in Florida’s climate and soil.

They also recently planted about 50 in-ground rose bushes to use for cutting flowers that clients have requested.

Though they appreciate roses, the couple discovered them only later in life.

In the late 1980s, Debbie was a professional hairstylist and Geoff did construction work. On weekends, they would travel to Sarasota to see Geoff’s family.

For about 10 years, the trip took them past Giles Ramblin’ Roses — a popular rose nursery in Okeechobee. In a hurry to arrive in Sarasota or back home, the couple says the flowers piqued their interest but they never checked them out.

That’s until a long weekend meant they were in less of a rush and Debbie finally convinced Geoff they had time to, well, stop and smell the roses.

At home, Geoff planted some of the roses they’d bought in the shady circle in front of their house. Then he headed to his mother-in-law’s home near the Intracoastal Waterway in

Lake Worth to plant some there, too.

In time, Debbie’s roses died but her mom’s thrived. 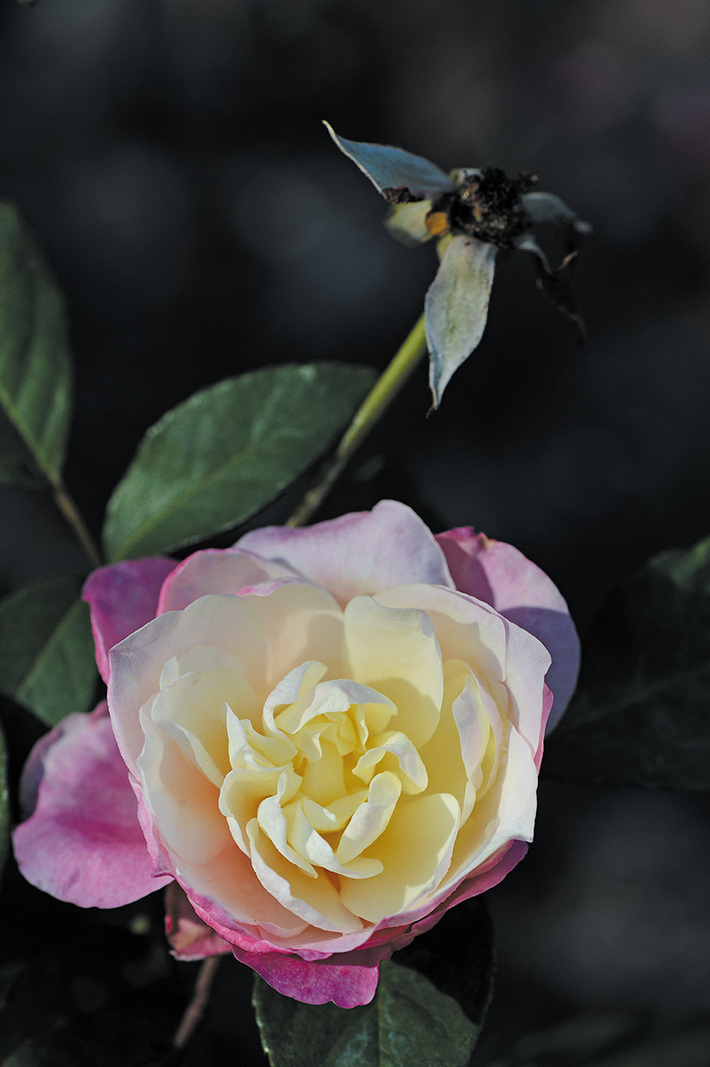 One of the heirloom varieties at the nursery is the Mrs. Dudley Cross, a Key West thornless rose. Photos by Jerry Lower/The Coastal Star

To discover why, the couple joined the Greater Palm Beach Rose Society and later the American Rose Society, where they gained a horticulture education including the fact that roses need lots of sun.

Soon they were having success growing the colorful blooms.

“I’d work construction and then come home to relax by trimming and grafting the bushes,” says Geoff.

Roses can be tricky to grow in South Florida unless the plant itself is grafted onto rootstock that makes it easier for the roses to cull water and nutrients from the soil.

In a busy year, Geoff has been known to have made about 3,000 grafts of 100 varieties of roses onto Fortuniana rootstock.

In the meantime, Debbie was in charge of the misting house where antique rose cuttings were given a spritz of water every 10 minutes until they sprang white thread-like roots.

“Eventually, we had enough roses in the front yard that we were both able to quit our jobs and do this full time,” says Debbie. But in 2004, the hurricane season brought Charley, Frances and Jeanne to visit. These storms wreaked havoc on the Cool Roses nursery as well as roses being grown in home gardens throughout the county.

So when rose gardeners called to ask Geoff and Debbie for help restoring their wind- and salt-blighted roses, the couple found a new opportunity.

Today they not only graft, grow and sell roses, but also plant and/or maintain rose gardens for 65 clients on the barrier islands from Jupiter Island through Boca Raton.

At the same time, Debbie is raising and selling salvia, rosemary and other butterfly-attracting plants.

“I like to grow different rose varieties and plants that do well with roses, so that we have something for everyone. Especially now that Valentine’s Day is here,” she says.

If You Go
Where: Cool Roses, 888 Chase Road, West Palm Beach
Information: Hours by appointment only at 561-310-8508; Geoffcoolidge@comcast.net; www.coolroses.com
To order: Visit website to see what rose varieties are offered and then call to order for home delivery. Rooted roses are shipped in pots via FedEx.