Dog advocates in Delray Beach are planning to turn loose roving packs of petitioners soon in a campaign to persuade the city to open part of its beach to four-legged bathers.
Several similar efforts to create a Delray dog beach have fizzled since 2004, when the Palm Beach County Commission shut down a 600-foot strip of sand south of Briny Breezes that man and dog had shared for years.
Mary Yuhas, one of the new movement’s organizers, thinks the outcome will be different this time. She has legal counsel. She has supporters willing to knock on doors. She has two corgis with high hopes. This time, she thinks the dog-beach dog will hunt.
“We have an attorney who’s drafting the petition right now and making sure it’s right,” Yuhas said. “We’re going to have team captains who organize groups to go into different neighborhoods. It’s a large effort and it might take six months, but it can be done.”
The last attempt to advance the dog-beach cause failed in 2007 when supporters had trouble getting the 6,000 signatures of registered city voters needed to put the issue on the ballot.

The same objections that helped kill the idea then are still around today.
“The dogs aren’t the problem. It’s the humans that come with them,” says Sandra Dezelan-Axelband. “I think dogs should be allowed to go everywhere. I know how to train the dogs. But how do we train the humans? That’s where it breaks down.”
Dezelan-Axelband, who runs Dezzy’s Second Chance Animal Rescue in Delray Beach, says you just can’t depend on people to clean up after their dogs and to make sure they behave.
“These dogs get a bad rap that they leave poop on the beach,” she says. “But it’s the human who doesn’t pick it up that’s to blame.”
Andy Katz, president of the Beach Property Owners Association of Delray Beach, says even if you could train the humans, there just isn’t room to set aside for a dog beach.
“We have 1.8 million visitors a year to our beaches and they are much more frequently used for a whole variety of activities,” Katz said. “The beach is much more heavily used than would make sense for a dog beach, which typically are in more isolated areas.”
Katz says the city already has a problem with people who, when the lifeguards are off duty, sneak their dogs onto the beaches and don’t clean up. People caught with their dogs on the city beaches currently face fines of $50 or more.
For Yuhas, a freelance writer, the issue largely comes down to what kind of city Delray Beach wants to be. She believes it should be dog friendly and more like Jupiter, which for roughly 25 years has managed to keep up one of the few dog beaches in the Southeast with a minimum of complaints from the public.
“I talked with people in Jupiter,” Yuhas said. “They said this is about the kind of town we want to be. All we’re asking for is a piece of beach, not the whole beach, for people who would like a place to see their dogs frolic.” 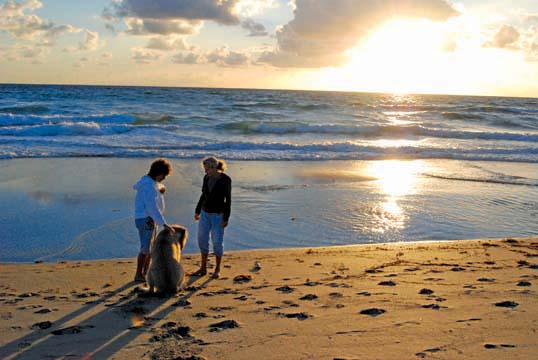 Designating dog-friendly beach areas would prevent the need for owners to bring their pets to the beach ‘illegally,’ such as these sunrise visitors to Delray’s beach. Jerry Lower/The Coastal Star