Ruvi New teams up on a video offering a message of love.

You may not know that Rabbi Ruvi New, co-director of Chabad of East Boca Raton, is a talented songwriter. His latest music video, featuring Canadian Hasidic Jewish cantor and singer Shlomo Simcha, is called It’s Never Too Late.
It’s a catchy, upbeat, folk-inspired song, offering encouragement amid the current political climate. Its primary message is one of love, followed closely by the advice “Be proud to be a Jew,” and “Be the leader you were born to be.”
In 2017, New fulfilled his lifelong dream by making Storm the World, an album featuring 12 original songs.
See the latest video at www.StormTheWorldProject.com.

Changing of the guard at Congregation B’nai Israel 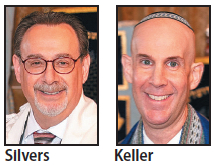 It’s the end of an era at Congregation B’nai Israel of Boca Raton. After 27 years, Rabbi Robert A. Silvers was elevated to rabbi emeritus. Generally, the role of a rabbi emeritus involves stepping back and being suitably honored, but Silvers is not in the habit of stepping back. Perhaps he’ll spend his time pursuing his interest in reading and collecting Jewish stories and in Sephardic history and spending more time with his family.
Silvers’ promotion cleared the way for Rabbi Rony Keller, the synagogue’s senior associate rabbi, to become senior rabbi on July 1. Keller, a native Floridian with a degree from the USF, joined CBI in 2017. He has updated and improved the school curriculum, led Shabbat and High Holy Days services and helped restructure the congregation’s bylaws.

Visit www.cbiboca.org for more information on the synagogue and the clergy.

St. Paul’s to hold series of discussions on race

St. Paul’s Episcopal Church of Delray Beach will host the 2021-22 “Sacred Ground Dialogue Circle,” a program that focuses on anti-racism and reconciliation through small-group discussions.
The 13-session series will begin with an orientation on Monday, Sept. 27 at 7 p.m. Subsequent sessions will meet periodically at 7 p.m. Mondays through March 28.
The program is free but you must register at https://stpaulsdelray.org.
St. Paul’s is at 188 S. Swinton Ave. Call 561-276-4541.