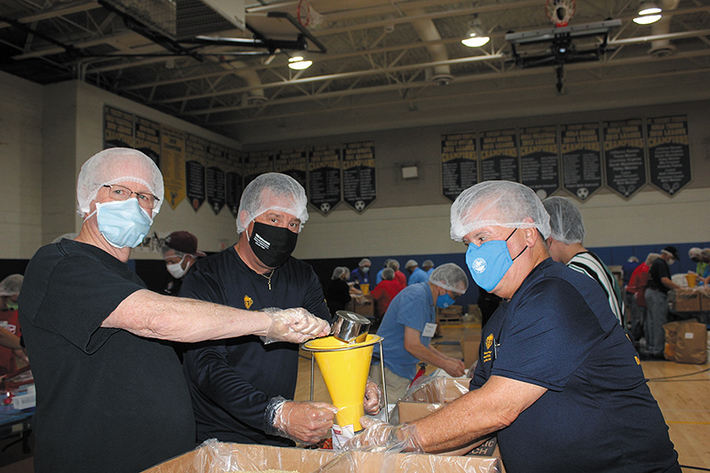 More than 100 volunteers packed more than 40,000 meals during a St. Vincent Ferrer’s Knights of Columbus event in Delray Beach in March. Photo provided

The Knights of Columbus Council 13996 at St. Vincent Ferrer Catholic Church in Delray Beach hosted a volunteer food-packing event at the school on March 20. More than 100 people showed up to assemble more than 40,000 nonperishable meals for people in Guatemala.

The event was part of the Knights of Columbus ministry promise to “Leave No Neighbor Behind” and was held with support from Cross Catholic Outreach, which handles shipping the meals. According to outreach data, at least 1 billion people go to bed hungry each night worldwide and an estimated 16,000 children die every day from hunger-related causes.

To learn more about the Florida Knights of Columbus, visit www.floridakofc.org.

Read more about the food packing event at https://crosscatholic.org/food-packing-florida-council.

The Knights of Columbus event helped people in Guatemala, but groups are also stepping up to refill the cupboards at food banks in Palm Beach County. The Mizner Cares Committee, which is part of Mizner Country Club, collected three carloads of nonperishable food for Our Lady Queen of Peace Parish church in Delray Beach.

The committee asked for food instead of money and collected so much, other churches in the area were able to share in the bounty.

For more information on what the committee does, visit https://miznercc.org/mizner-cares-gives-back.

Also in Boca Raton, Spanish River Church held its second annual food drive to benefit Boca Helping Hands and broke its own record by collecting 8,726 pounds of food. The food drive is part of Spanish River’s “Serve the City” initiative that encourages people to volunteer in the community. This year 42 volunteers stepped up.

Two other Boca Raton groups — B’nai Torah Congregation and St. Gregory’s Episcopal Church — worked together and found another way to fight hunger, homelessness and the coronavirus by providing homeless people with a place to shower twice a week.

The mobile shower station is open on Tuesdays and Thursdays from 10 a.m. to 1 p.m. outside the church at 100 NE Mizner Blvd. 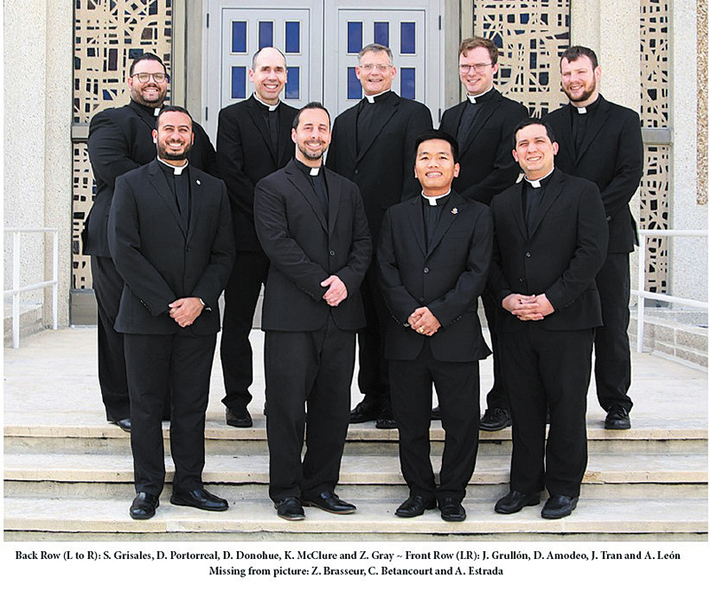 Two of the men, Daniel Donohue and Armando León, are from Palm Beach Diocese. They were among nine seminary students ordained by His Excellency William A. Wack, CSC, Bishop of Pensacola-Tallahassee, at a ceremony on April 17.

The Archbishop of Miami, Thomas G. Wenski, ordained three other SVDP seminarians on April 11. César Betancourt, Agustín Estrada and Sebastián Grisales are studying for the Archdiocese of Miami.

As newly ordained deacons, these men will be assigned to parishes where they will minister in preparation to become priests in the following year.

Among other duties, they will preach, perform baptisms, witness marriages and preside over wakes and funerals.

In other news, the seminary was recently awarded a Lilly Endowment Inc. grant for phase one of the “Pathways for Tomorrow Initiative,” which will allow the seminary to continue to educate students and prepare them for ordination in an increasingly complex world.

For more information about the seminary, which has produced more than 600 priests since 1963, visit www.svdp.edu.