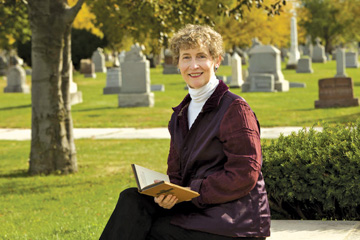 Carol DeChant has made a recording of 16 of the 50 eulogies
featured in her audio-book Great American Catholic Eulogies. Photo provided

An Ocean Ridge writer who spent seven years searching for eulogies that were given for inspirational Catholics has been awarded recognition for the Best Audiobook in 2012.

Carol DeChant’s recording contains 16 of the 50 eulogies in her book Great American Catholic Eulogies. She received her award from the Independent Book Publishers Association on June 4 in New York City.

“Eulogies are meant to be heard, so we were delighted to be able to provide a representative sampling from the book that people could experience much like those who might have listened to them when they were given,” said DeChant, a 20-year Ocean Ridge resident.

Her book offers a spectrum of American Catholic history through the lives of men and women of every era since the American Revolution. Those who were memorialized made significant contributions in social, public, church or military service, or through art, music, literature, media and sports.

Some were originally written remembrances that were performed verbally for the first time by professional actors in the audiobook.

“We inevitably reflect upon our own life when we hear a eulogy, wondering how we will be remembered,” DeChant said in explaining her book’s purpose. “Because eulogies are about the deceased but for the living, they can help us find the strength to go back to our life, to live it more deliberately.”

Some of the people who delivered the eulogies in her book are unexpected. For example, former President Ronald Reagan gave the Kennedy eulogy many years after his death when Reagan was helping to raise money for the Kennedy Presidential Library.

“I like it when death brings respect from someone who didn’t agree with that person when they lived,” DeChant said. “We can all rise to such an occasion if we are willing to do it.”

Some of the eulogies are humorous as well as instructive.

“This is not a dismal book at all,” she said. “Laughter can be very healing at a time of mourning. A well-done eulogy can bring smiles to people who knew the deceased.”

DeChant said gender balance was her greatest challenge in researching the book because women have not been eulogized in American history as men have.

“This neglect is not because men wrote our history, but also because of the humility of female leaders,” she said. Ú