On a brisk Friday morning earlier this year, Judy Fenney and Kathleen Megan awaited the start of the mobile shower program in Delray Beach.

The two volunteers, wearing pink pullover sweaters and blue jeans, checked in 14 homeless people who had signed up for showers.

The shower truck is parked in a lot behind St. Matthew’s Episcopal Church.

The women handed each person a toiletry kit, a towel, new socks and underwear. Men each received a new T-shirt and women got new bras.

That Friday was the first day of the six-month pilot program, which gained city commissioners’ blessing in December.

The showers are offered on Fridays during lunchtime and limited to people who eat at the Caring Kitchen meal sites, at St. Matthew’s, Cason United Methodist Church and, effective Feb. 28, First Presbyterian Church of Delray Beach on the barrier island.

People also can request showers through Ariana Ciancio, the special populations advocate in the Police Department.

The City Commission wants to make sure the program serves only the homeless population of Delray Beach.

“We started two years ago on the transition committee for the Caring Kitchen,” Megan said of the CROS Ministries program. “It’s been an amazing journey.”

Ezra Krieg, who chairs the city’s Homeless Task Force, called Fenney and Megan “superstars” for their efforts to bring the mobile shower truck to Delray Beach. He praised the Rev. Marcia Beam, pastor of St. Matthew’s, for allowing the shower truck to sit on church land behind the sanctuary at 404 SW Third St.

And he commended Ciancio for her soft touch with homeless people.

“Our mission is to try positive solutions,” Krieg said. “We can’t arrest our way out of the homeless problem.”

In 2017, the City Commission wanted the Caring Kitchen to move from a city-owned location on Northwest Eighth Avenue where it had prepared and served meals, offered clothing and shoes, and provided social services. The neighbors had complained about litter and disturbances on their properties.

That would allow the committee to apply for grants and allow it to accept direct donations, instead of the donors’ making out checks to St. Paul’s and writing shower program on the memo lines.

The committee meets monthly at St. Paul’s to talk about its needs, such as backpacks to give to shower-takers with tattered packs, Fenney said at the February meeting. The program also needs bras.

The committee started with a handful of churches, she said. Now it has members from 12 churches, a Jewish temple, local nonprofits and the city.

“Because it involves churches, we have a different quality of volunteers,” Fenney said. “It is very much the ministry of the churches to feed the hungry and provide services.”

Patti Alexander, who sits on the CROS board and is a member of Cason United Methodist, said the church trustees offered Cason as a serving site when they heard the Caring Kitchen had to move.

“Then, the trustees agreed to allow the food to be prepared at Cason,” she said. “It snowballed from there.”

The initial six-month contract expired Feb. 1 and was renewed for another year, with options, Alexander said.

That allows CROS Ministries time to search for a countywide site for its food distribution offerings, Mageria said.

As part of the effort to help homeless people, college interns from Family Promise of South Palm Beach County staff two sessions weekly at the Delray Beach Public Library. They help people apply for birth certificates and get ID cards.

“Each appointment takes at least 90 minutes and can take up to two and a half hours,” said Jennifer Raymond, executive director of the Family Promise branch. The social work students also do mental health assessments and referrals.

More than 270 people have been served, Raymond said. “Many are repeat clients because homeless people often lose their IDs or are robbed of their belongings,” she said.

“You can’t do anything these days without an ID,” said Jackie Ermola, president of the St. Vincent Ferrer Catholic Church Care Ministry. “Even for a county bus pass, you need a photo ID.” 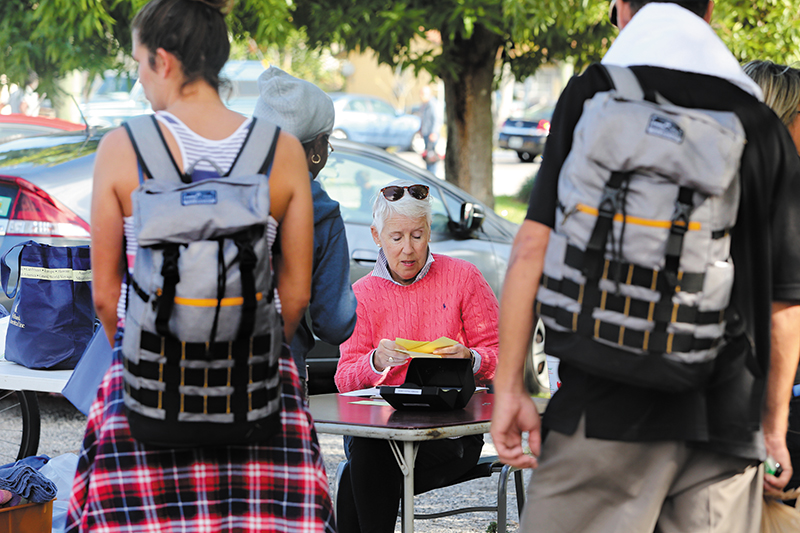 Kathleen  Megan of St. Paul’s Episcopal works check-in at the showers, which are open each Friday for homeless people who sign up. They leave with donated items such as clean clothes.

The St. Vincent group uses donations from church members to purchase the toiletry kits, socks and underwear in bulk for distribution on shower day. It also pays to launder the towels.

The shower truck has become the most visible sign of the interfaith committee’s social services role.

Chris Bentley, founder of Live Fresh Inc., said he got the idea for a mobile shower program when he was enrolled in a master’s program at Columbia University in New York City.

“The homeless there often came into the coffee shops,” Bentley said. “But no one wanted to sit next to them because they smelled.”
Bentley says that when he felt low, he could “take a shower and get a haircut” and feel better. But homeless people could not do that easily, he said.

He received a $100,000 grant from Impact 100 of the Palm Beaches to purchase the first mobile shower, which has six stalls and is in Fort Lauderdale. Later, his company bought a four-stall unit that is parked at St. Matthew’s.

“I feel great,” one man said after his shower in early January.

Wearing a feather in his cap, he came out of the unit holding his socks and shoes. He said he didn’t want to take up more than his allotted time. He also said, “They need a garbage can in the units.”

The truck has two propane tanks to heat the water, lessening the financial demand on St. Matthew’s, Bentley said.

Even so, the Rev. Beam said her governing board was willing to let the unit hook up to the church’s water. “That’s what churches should do,” Beam said. Chris Bentley (center) and volunteer Judy Fenney check in people to use the showers parked at St. Matthew’s Episcopal Church in Delray Beach.

On the first day, Adams, Ron Simon and Larry Okun took turns timing the showers. Each person is allowed 15 minutes and receives a warning after 13 minutes. Showers are sanitized after each person is finished.

Ciancio, the special populations advocate, told city commissioners on Feb. 12 that no incidents required police response at the shower site.

Her dream is to have everything come together for a homeless person in a short period of time, from visiting the city’s Career Cottage to finding a suitable job interview.

She hopes that interview would take place on a Friday afternoon. That would allow the homeless person to get a shower, eat lunch at St. Matthew’s and select business clothes from her stash to wear to the interview. “I feel like a million bucks when I’m clean, food is in my belly and I have new clothes to wear,” Ciancio said.

She mentioned one success story about a homeless man who now works on Atlantic Avenue. Soon, she said, he will have saved enough money to get into housing. 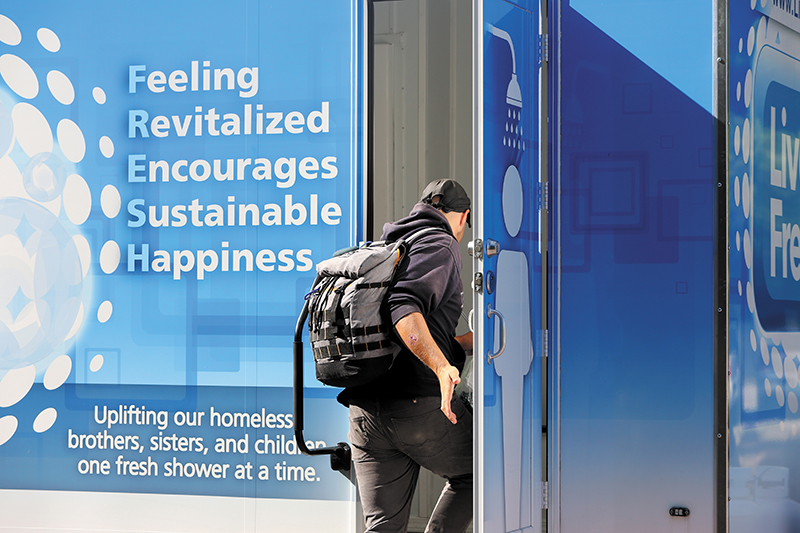 A client heads in to take a shower, which is scheduled for up to 15 minutes.

Through mid-February, 63 people had taken advantage of the mobile shower program, Fenney said. That translates to 12 to 14 people each Friday.

She said many are repeat clients who find the showers refreshing and empowering.