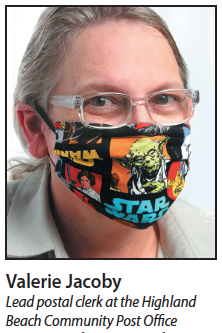 During the 20 years that Valerie Jacoby has been behind the counter of the Highland Beach Community Post Office, she’s gotten to know many of the residents.
Over the years, folks would come into the small-contract postal station, established in 1964 as a convenience for people who didn’t want to cross the bridge to Boca Raton, and catch up on what was happening around them.
Some, who might bump into neighbors, would stay for a few minutes talking about everything from the impertinent to the important.
“One of my co-workers used to compare it to Mayberry,” says Jacoby, 60.
Now, with COVID-19 as a backdrop, the atmosphere is more like that of a regular post office. Amid constant concerns about contagion, conversations have been converted to shorter chatter in an environment where safety is a top priority.
“It’s just a little more clinical,” says Jacoby, who worked for the U.S. Postal Service in Illinois for several years before moving to Florida.
Run by the town of Highland Beach, the post office behind Town Hall has offered residents — those wishing to buy stamps or mail packages — an alternative to visiting a larger, potentially more crowded postal station.
With the arrival of the virus, town leaders have made necessary changes and instituted precautionary measures while hoping to keep the post office open.
“They’ve really done a lot to keep everyone safe,” Jacoby says.
One of the most obvious changes has been a rearranging of the small lobby. A tempered glass partition separates customers from clerks and a pullout drawer makes it easier to mail a package.
Customers are required to wear masks and hours have been cut from a full day to 8:30 a.m. to 12:30 p.m.
With just two customers allowed in the 500-square-foot building at a time and social distancing expected, the post office remains a safe convenience for residents and a safe place to work for Jacoby.
— Rich Pollack