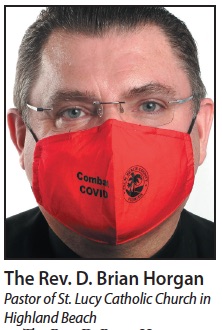 The Rev. D. Brian Horgan of St. Lucy Catholic Church in Highland Beach has been on the front lines of war before as a chaplain in the Air Force early in his pastoral career. Now, with COVID-19, he feels like he’s in a war again.
The pandemic has changed how we worship God and the way we bury our loved ones, Horgan said. About 60% of parishioners attend socially distanced Mass each week, but funerals are a different story.
“Most funerals have been with just the funeral director and the deceased,” Horgan said. “It’s been challenging, but we can do tremendous work with the families at home.”
In this small parish, which has lost more than a dozen members of its congregation to the virus, goodbyes are by telephone, and even clergy can’t bridge that gap.
“Sometimes we get in and sometimes we don’t,” Horgan said. That means some don’t receive last rites, an important final sacrament that includes confession and absolution.
“It wipes away all your sins” before death, Horgan explained, and “it brings great comfort to the dying.”
Horgan can perform last rites weeks before a person dies or if someone is facing a serious medical procedure, but COVID usually arrives unexpectedly.
Loved ones’ not receiving that final Communion weighs heavily on the hearts of some families. But Horgan finds a way to comfort his parishioners. A priest isn’t needed for someone to be absolved of sins, he said, if he or she simply repents and asks forgiveness. “God is full of mercy and love.”
Horgan, who earned medals for his work during Operation Iraqi Freedom in 2008, says COVID-19 is “a clever enemy shrouded in mystery.”
He senses an underlying fear that reminds him of war.
But “don’t be afraid. Fear is a ‘false experience appearing real,’” Horgan says, spelling out an acronym associated with the word. “I trust God and serving God’s people is the most important thing I do. Fear won’t hold me back.”
— Janis Fontaine