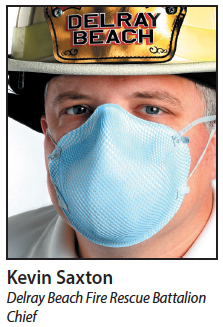 The threat of COVID-19 is always on Kevin Saxton’s mind, but the Delray Beach Fire Rescue battalion chief won’t let the highly contagious disease prevent him from fully serving the community.
“It’s something I think about all the time,” says Saxton, who is 38 and in his 17th year with the department. “I’m going to take the precautions I need to take, but I’m still going to do my job.”
He is responsible for the overall operations of the department’s six stations on the days when he is on shift. While he doesn’t respond to most calls, he remains available. He monitors the radio and makes sure those who do answer a call are doing what’s needed to adequately protect themselves and the rest of the crew from the disease.
“The virus has complicated our responses,” he said. “It takes us a little longer to get ready and there’s a lot more decontamination.”
Along with changing the way the department handles calls, the virus has affected how firefighters interact with one another when they’re not responding.
To minimize the spread of the virus, all are required to wear masks in the station while in common areas. And, instead of everyone eating at one long table, the shift is split by squad into two tables with everyone maintaining 6-foot separation.
“We’re just not spending as much time together,” Saxton says.
Even when they are on a call, firefighters and paramedics are maintaining a safe distance, especially on medical calls.
One member of the three-person crew will make contact with the caller and another will be available if needed. The third person remains in the truck.
“It’s one fewer person who is exposed,” Saxton says.
As shift supervisor, Saxton is vigilant to make sure everyone takes necessary precautions. “You want to make sure we don’t put our guard down,” he said.
— Rich Pollack