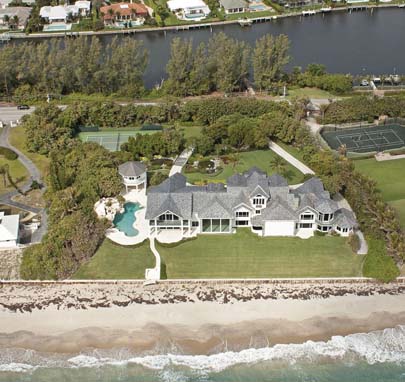 The 32,000-square-foot Manalapan home once owned by Lois Pope
has sold yet again, this time for $15.63 million. Photo provided

That would be Ed and Jené Brown, who plan on doing a complete renovation, said Jack Elkins, a Realtor with Fite Shavell, who represented both the buyer and the seller, MGM Designs, LCC.

“The Browns have already selected Lands End Development,” Elkins said. “They are ready to move forward as soon as they go through zoning.”

The Browns are “end users,” he said. “People are seeing the appeal of Manalapan, which I find refreshing.”

Brown is CEO and co-owner of Patron Spirits, a maker of tequila, rum and vodka.

If the Browns go through with their plans, they’ll be the first to occupy the estate since motivational speakers Peter S. and Tamara A. Lowe owned it from 2004 to 2009.

• Following an extensive remodel, McKinney sold it in November 2000 to the Binky Revocable Trust for $27.5 million, to software entrepreneur Daniel Gittleman.

• Two months later, another sale of the property was recorded. This time, McKinney’s company sold the estate for $22.4 million to the Lowes.

• June 2009, there was a recorded sale for $22,458,456 to Germantown-Seneca Joint Venture; it was an amount almost equal to the existing Bank America liens on the property. According to SEC filings, Germantown-Seneca’s general partners were two wholly owned subsidiaries of Bank of America: Ritchie Court M and Harper Farm M., both Maryland-based corporations.

When McKinney bought the estate from Pope, he undertook an 18-month renovation, which included adding a guest house and tennis courts, and reconfiguring the house for a 2,200-square-foot master suite and a large catering kitchen. “Here was a single lady living in a 29,000-square-foot house,” McKinney said. “It’s one of the best-built homes I’ve ever seen, but the floor plan was lacking for what we thought buyers wanted at that time.

“Downstairs, there was a basement with a 15-car garage and hair salon. We got rid of that and put in a spa.”

The Gittlemans were starting a family at the time, and decided they wanted to live in a more family-oriented community, McKinney said, so he bought it back. “I wasn’t looking to buy, but the price was right, and we were going to remake it again. Then the Lowes showed up and wanted it just the way it was.”

He was working on putting a deal together to buy it back in 2010, but MGM Designs beat him to it, he said.

“To rebuild that house today, it would cost $15 [million] to $18 million, and that doesn’t cover the cost of the land. It was a steal. MGM got the house for free, or vice versa.

“The house could be knocked down and two houses built there,” he added.

Which was what Ralph Gesualdo of MGM recognized when he and his wife, Mary, bought the property.

“We are happy to stay in our home on the Intracoastal,” he said. “1370 S. Ocean is a magnificent piece of property. Those kinds of lots are few and far between. But as we got into it, we realized it would take a considerable investment, and we didn’t want to put in the time and effort. It’s such a beautiful house and has good bones that we didn’t want to tear it down. And we found buyers who will give it tender loving care.”                              Ú