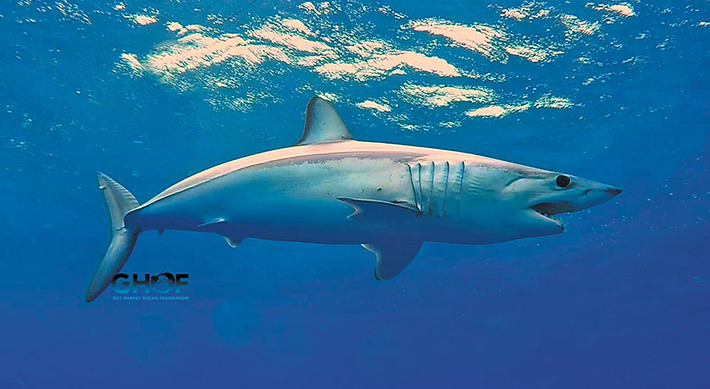 A short-fin mako, one of the fastest marine creatures, is one of two shark types featured in the Great Shark Race 2021, a contest created by the Guy Harvey Research Institute to raise awareness about threats to sharks. The tagged mako and whale sharks that log the most miles by July 14 will be declared winners. Photo provided

The Guy Harvey Research Institute at Nova Southeastern University is encouraging people to track sharks as they move around the globe wearing satellite tags as part of a push to boost public awareness of sharks.

The race is something of a tortoise-versus-hare match. The short-fin mako shark is one of the fastest marine creatures in the sea, while the mammoth whale shark is, well, not so fast.
Satellite tags mounted on the sharks’ fins enable wildlife researchers — and the public — to follow the sharks online through the research institute’s shark-tracking website, www.GHRItracking.org.

Mako and whale sharks are known to roam thousands of miles, but scientists are trying to learn more about the factors that drive their migrations.

Shark populations are threatened by human activities, including the global shark fin trade.

“For more than 20 years I have been working with researchers at NSU to learn more about sharks that are so critical for maintaining a healthy balance in our ocean ecosystems,” said Guy Harvey, the renowned marine artist who also holds a doctorate in fisheries science.

The Great Shark Race began Jan. 1 and ends July 14, which is International Shark Awareness Day. The mako and whale sharks that log the most miles will be dubbed the winners.

“This shark race event is a way to raise awareness of the plight of sharks and get community support for this needed research,” said Mahmood Shivji, director of the GHRI and the Save Our Seas Foundation Shark Research Center.

“We’ve lost upwards of 30% of the mako sharks we’ve tagged since we started,” Shivji said. “It illustrates just what these animals face in the wild. Our tracking studies have demonstrated that mako sharks in the western North Atlantic are being overfished.”

Anyone operating a boat under 26 feet must use an engine cutoff switch that will shut down the boat if the operator falls overboard or moves too far away from the helm or tiller, a federal law that took effect April 1 says.

The law is intended to prevent runaway boats that endanger both the boat operator and others on the water.

Section 8316 of the National Defense Authorization Act of 2021 requires the use of an engine cutoff switch, also known as a kill switch, on boats under 26 feet powered by three horsepower or more while the boat is under way.

The ECOS — a physical lanyard type or an electronic ignition kill switch — are required equipment on newer boats under 26 feet.

Wearing the ECOS also is not required on boats in which the primary helm is enclosed in a cabin, the Coast Guard says.

Don’t expect law enforcement officers to peer into your boat to determine whether you’re wearing a kill-switch lanyard.

“This is not something FWC will enforce,” said Brian Rehwinkel, boating safety outreach coordinator for the Florida Fish & Wildlife Conservation Commission. “We have no state law to enforce.”

Rehwinkel said the Coast Guard might enforce the ECOS law, but he expects most of the effort will be educational and instructive, meant to encourage boat operators to use ECOS devices to prevent accidents.

July 10: The Big Dog, Fat Cat KDW Shootout based at Sailfish Marina in Palm Beach Shores. A kickoff party is set for 7 p.m. June 23 at Sailfish Marina. The captains meeting and silent auction begin at 5:30 p.m. July 9. Fishing will be from 6:30 a.m. until 3:30 p.m. on July 10. Eligible fish: kingfish, dolphin and wahoo. Basic entry fee is $150 per boat. Enter online at www.bigdogfatcat.org.

Search around floating sargassum mats for dolphinfish (mahi mahi) as the weather warms. Troll by weed mats or stop around them to cast out jigs or small live baits such as pilchards or chunks of squid or sardines. Make splashing noises on the surface to draw fish to the boat. Minimum size: 20 inches to the fork of the tail. Daily bag limit: 10 per angler.