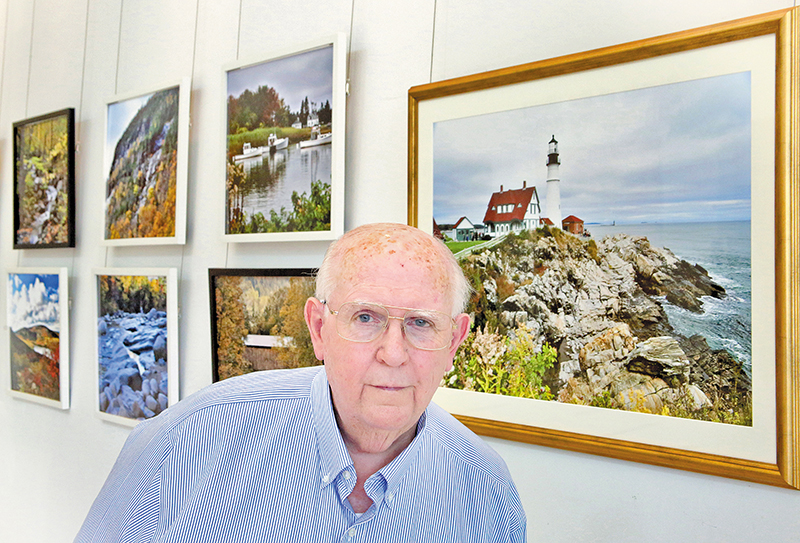 After rising from firefighter to fire chief for the city of Boca Raton, Kerry Koen has returned to his first calling, photography.
Tim Stepien/The Coastal Star

The autumn colors are at full peak in Boca Raton, displayed in forests of brilliant trees, on mountains and in valleys — courtesy of Kerry Koen and the Boca Raton Public Library.

Koen is the photographer who produced the downtown library exhibit “Autumn in New England,” a collection of scenes from Maine, Vermont and New Hampshire. His images depict everything from farmhouses, covered bridges and country roads to lighthouses and sunrises.

“It’s such a beautiful part of the country and very friendly,” Koen said. “People are always appreciative of you coming to visit their trees and foliage. They’re very proud of it.”

Some might know Koen, 75, better as a firefighter and former fire chief of Boca Raton and Delray Beach. But photography has been part of his life since his days at Seacrest High School. He went to Southern Illinois University to study commercial photography, but became interested in government and earned a bachelor’s degree in public administration from the University of Memphis. Koen is also a graduate of the National Fire Academy, has an associate’s in culinary arts from Johnson & Wales University and has done master’s coursework at Florida Atlantic University.

During high school, Koen shot photos for the school newspaper and yearbook. In college, he worked on local newspapers and was a stringer for the UPI wire service. He’s used photography in his profession and as a hobby ever since.

“The technology has changed so much from the time I started until now. Nothing that I learned in photography school exists anymore,” he said. “Not just the fact it’s all digital, it’s the technology of printing — and the camera itself is a computer.”

There was a time when Koen shot in black-and-white film because color was expensive. “Now you get color for free,” he mused.

While one of his favorite cameras was a Rolleiflex twin-lens reflex, today he uses his phone’s camera for everyday photographs. He also has a Nikon with telephoto lens.

Koen enjoys food and travel photography. Most mornings he frequents Boca Raton beaches to capture the sunrise. The city’s website is showcasing one of those photos.

Exhibits he’d like to curate include Chicago architecture — near where his daughter lives.

The library exhibit is Koen’s first. The images were taken during mid-October trips he and his wife, Lynne, made. They stayed in Woodstock, Vermont, and traveled from there. Among his favorite spots: Cadillac Mountain in Arcadia National Park and Bar Harbor, both in Maine.

Koen has learned from talking to exhibit visitors that his photos stir memories. “I realized this was not for me, it was for them. They had found something in it for them, mostly a memory or two.”

Autumn in New England will be on display at the downtown library, 400 NW Second Ave., through Oct. 25.