A caravan through John Prince Park on Oct. 10 in Lake Worth Beach raised money for Gold Coast Down Syndrome. The organization used a caravan instead of its traditional walk for the second consecutive year. Tim Stepien/The Coastal Star

It was May of 2020 and like many other leaders of nonprofit organizations, Anne Dichele was starting to worry.
For 26 years Dichele’s organization — Gold Coast Down Syndrome — had been doing a fundraising walk that generated revenue accounting for about two-thirds of the nonprofit’s annual budget.
After more than a month of a statewide stay-at-home order, Dichele and Development Director Corinne Pike were struggling to figure out how to replace the Downright ExtraOrdinary Walk during the pandemic.
“The heart and soul of our organization is our connections, so we couldn’t imagine being socially distanced,” said Dichele, the Boynton Beach organization’s executive director. “We were trying to come up with a way to keep the connection during a pandemic when an idea just popped into my head. I just looked at her and said, ‘We’ll do a car caravan.’”
First held in October 2020, the event surpassed most expectations, bringing more than 100 decorated cars to a loud and boisterous vehicle parade through John Prince Park. Students from local schools were among those who cheered on kids and adults with Down syndrome and their families as they paraded past.
Throughout Palm Beach County, nonprofit organizations spent much of the spring and summer of 2020 wondering how they would replace the money typically received from major fundraising events.
“It was a year of Zoom events and golf tournaments,” said Chiara Clark, a member of the board of the Delray Beach Public Library and a former president of the Parents Auxiliary at Gulf Stream School. “The gifts were masks and hand sanitizers.”
Still, several organizations like Gold Coast Down Syndrome decided to think outside the Zoom boxes and come up with innovative alternatives.
“Even though we couldn’t be actually ‘together together,’ we could still be together,” Dichele said.
The George Snow Scholarship Fund pivoted from holding its longtime Ballroom Battle in front of a crowd in a hotel ballroom to one telecast from the WPTV studios on a Saturday night in 2020 and again in August 2021.
To raise money for the Festival of the Arts Boca and replace the revenue that would have been generated by a first-ever gala, Executive Director Joanna Marie Kaye tapped into her longtime public television background and held an event reminiscent of a PBS pledge drive.
At the Literacy Coalition of Palm Beach County, the annual LOOP for Literacy that typically brought 300 supporters together for a successful fundraiser, became LOOP Your Way with supporters collecting donations and bicycling, running or walking their own loop wherever they were and submitting photos.
Faced with not being able to gather close to 1,200 people together for the annual Brain Bowl luncheon — which raises money to support those living with Alzheimer’s, dementia and related diseases, as well as their caregivers — organizers created Bark and Browse, an outdoor fundraiser that drew 400 supporters.
“It was wonderful because people were together,” said Brain Bowl Events founder and CEO Pamela Higer-Polani, adding that masks and hand sanitizer were plentiful. “Brain Bowl is about connections, and connecting people over Zoom doesn’t always make people feel warm and valued.” 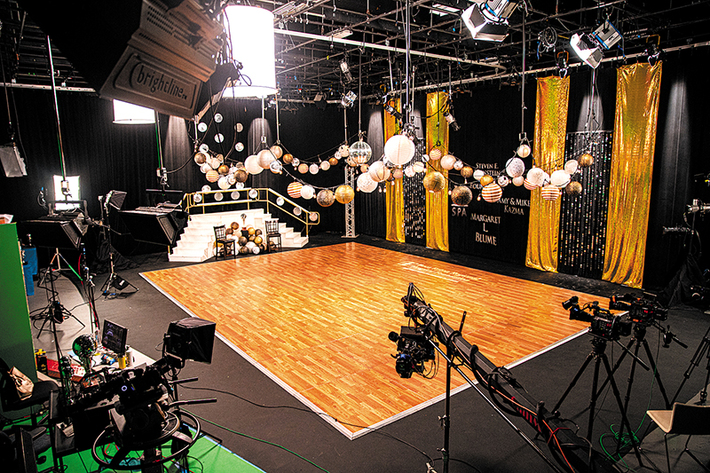 Boca’s Ballroom Battle shifted to telecasts from a TV studio. The 2020 and ’21 shows each drew about 20,000 viewers and raised about $40,000 during the telecasts. Photo provided

Changes proved successful
Although each organization took a different approach to raising money, most say they raised enough money to beat previous years’ revenue or at least surpass their goals.
“There were plenty of nonprofit organizations that did better because they were able to be nimble and raise money around the new things they were doing,” said Vicki Pugh, CEO of Advancement Experts, which works with nonprofits on development and capacity building.
Pugh says communication was crucial to the success of organizations that moved in a different fundraising direction during the pandemic.
“It was really important for organizations that pivoted to keep in touch with their donors and to tell them what they were doing,” she said. “Building a new case for support was what kept nonprofits afloat.”
For many, sponsorships were critical. Another key to the monetary success was a reduction in expenses that come with a live event.
“We netted more money than we did when we did the Ballroom Battle live,” said Tim Snow, president of the George Snow Scholarship Fund.
Like many other organizations, Snow’s team wanted to stay close to an event that worked well in the past.
For almost 15 years, the Ballroom Battle has teamed community leaders with professional dancers, similar to ABC’s Dancing With The Stars, with the dancers who raised the most money being declared winners.
In previous years the event was held at the Boca Raton Resort and Club, drawing about 800 guests who would make donations for dancers and participate in auctions. The event, Snow said, raised about one-fourth of the organization’s annual budget.
“We knew it was a widely successful event for us,” he said, adding that at one point organizers considered renting a drive-in theater and holding the event there.
Instead, listening to TV one Saturday morning while doing chores, Snow saw celebrity chef Emeril Lagasse promoting products and realized that television might work.
With a 7 p.m. spot on a Saturday night, the 2020 and 2021 Ballroom Battles each drew an estimated 20,000 viewers and raised about $40,000 while on the air, in addition to the money raised by the dancers prior to the broadcasts. The telecasts, which showed pre-recorded dance and other segments, also were streamed on the Snow scholarship website and available on YouTube.
“This gave us an opportunity to tell our story to a different audience,” Snow said. “We were fortunate we had an event that translated to television.” 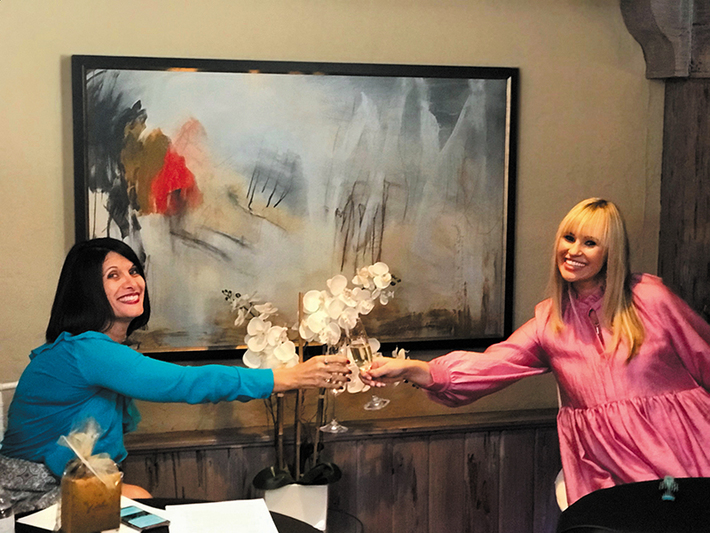 Joanna Marie Kaye and Olivia Hollaus of Festival of the Arts Boca took a fundraiser online and made it like a PBS pledge drive, with entertainment and a pitch for donations. Photo provided

Pledge drive event for art
For the Festival of the Arts Boca, putting two weeks of events on TV wasn’t an option, but Joanna Marie Kaye’s television experience came in handy when the organization used the internet for two events.
Plans for a 15th anniversary gala in June were upended so Kaye and her team started looking at virtual galas — but none of what Kaye saw online matched the goals they were hoping to achieve.
“Then a light bulb went off and I thought why not do it like a PBS pledge drive,” she said.
Teaming up with board member Olivia Hollaus, Kaye hosted a live event on the organization’s website with individual taped musical performances from Joshua Bell and Larisa Martinez.
“You had the entertainment portion and then you had two people asking for money, explaining the mission and why it’s important,” Kaye said.
As part of the event, which was also available on YouTube, supporters could sign up for a “party in place,” which could include something like a bottle of prosecco and chocolates delivered prior to the event.
The organization also revamped its successful Festival of the Arts event, hosting online lectures and performances that would normally be live — but with a twist. This time around, the performances were free, but included requests for donations.
The performances were watched by hundreds of people in 21 countries and generated enough money, along with sponsorships, to surpass financial goals. The pledge drive event also exceeded the goals. 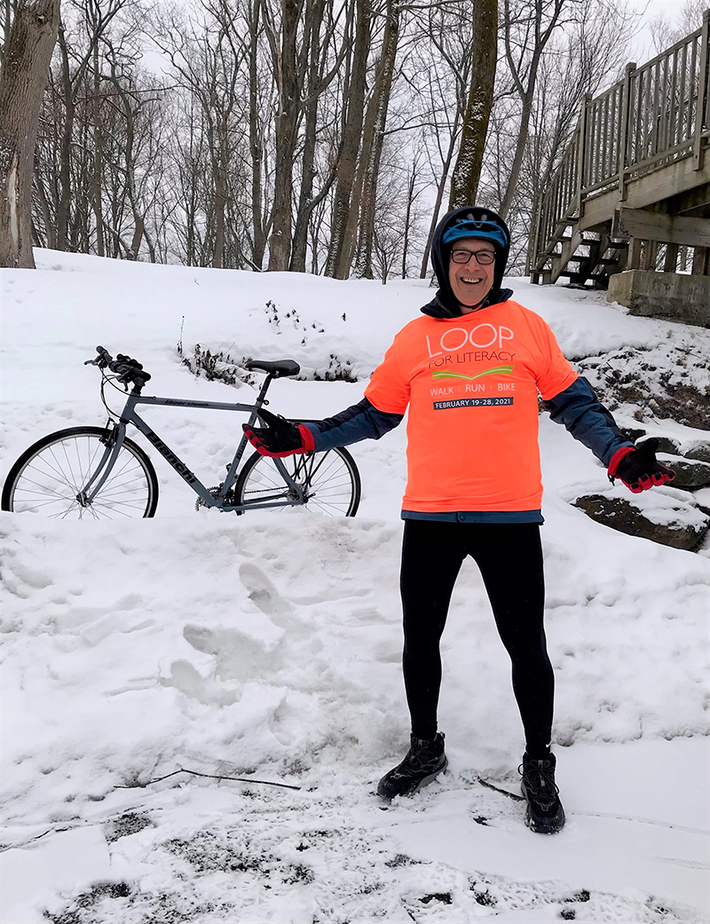 Outdoors worked well
For three other organizations, outdoor events — some reimagined and some new — proved to be successful during the pandemic.
The Literacy Coalition of Palm Beach County discovered success by changing a longtime event — LOOP for Literacy — from a group bike ride, walk or jog in the Lake Worth area to LOOP Your Way, where supporters could do the same activities but do them wherever they were and when it was convenient.
“The key is finding the unique parts of an event that make it successful and adapting that effort to reach your goal,” said Kristin Calder, the literary coalition’s CEO.
She said changes to the loop event were welcomed by participants. “It allowed more people to participate on their own schedule.”
The event raised a record $80,000.
“It was never about are we going to do it,” Calder said. “It was about how are we going to do it.”
As part of the event, each participant was able to pick up a T-shirt, a medal and a $10 gift certificate to Park Avenue BBQ Grille and get a tour of the coalition’s office at the same time.
“Getting the shirt, the medal and the barbecue helped provide a sense of normalcy in abnormal times,” Calder said.
The coalition also continued another key event, its Grand Bee, in which teams competed online in a literary-themed trivia contest. Brain Bowl CEO Pamela Higer-Polani and her husband, Mark Polani, with Sunshine at Bark and Browse. The fundraiser replaced a luncheon to support people living with Alzheimer’s and related diseases. Photo provided

For the team at the Brain Bowl, Bark and Browse was a way to keep a very successful event going, and it was a chance to focus on pets and the role they play in helping people with cognitive issues.
“One of our goals was to bring attention to pets that provide much-needed emotional support to families coping with the stress of Alzheimer’s disease, Parkinson’s, dementia and other related neuro-cognitive disorders,” Higer-Polani said.
As part of the event, a contest took place in which individuals could pay money and vote for their favorite pets online.
The outdoor portion of the fundraiser, at Burt Aaronson South County Regional Park, offered visitors more than 60 vendors selling goods and services.
A portion of the money raised from the event went to the Palm Beach County Sheriff’s Office to help with the purchase of Jess, a dog used in search-and-rescue missions, often involving dementia patients. Additional money went to the Alzheimer’s Association to support a local Brain Bus, which through its travels raises awareness in the community.
Higer-Polani says that one of the most important parts of the Brain Bowl is its ability to show caregivers and people with Alzheimer’s that they are appreciated.
“People feel validated, included and cherished,” she said.
Those same feelings were shared by people who participated in Gold Coast Down Syndrome’s caravan.
Dichele said her organization was pleased with the financial results and by the outpouring of support from people in and around the caravan — an event that was different from what worked in the past.
“We made the choice to do the caravan based 100% on who we are as a Gold Coast family,” she said. “We just couldn’t picture a successful event where people weren’t together.”