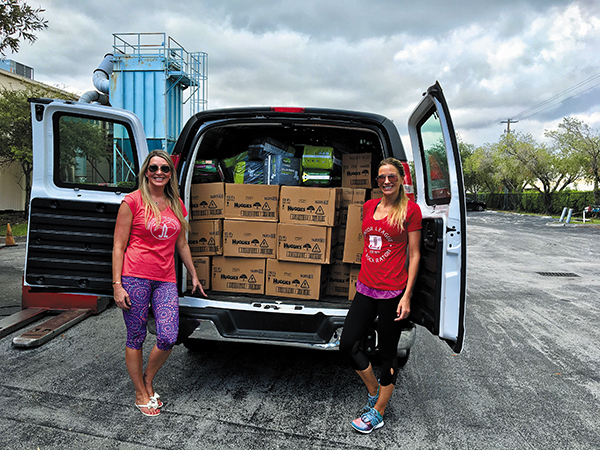 Jennifer Rosemurgy and Linsey Desich with a truckload of diapers ready for delivery. Photo provided

Palm Beach County Commissioner Steven Abrams and Boca Raton City Councilman Robert Weinroth attended the Junior League of Boca Raton’s first general membership meeting of the season and presented proclamations to the nonprofit for its collections of diapers and other baby supplies.

The league distributes the items to those in need in the local community, as well as to victims of natural disasters such as Hurricane Irma, which hit the Florida Keys, and Hurricane Maria, which devastated Puerto Rico.

“Diapers are vital for babies’ health and well-being,” Abrams said. “Not everyone has access to them, and the need is even greater in the aftermath of natural disasters. I commend the JLBR for all they are doing to collect and donate diapers and raise awareness of this critical need.”

More than 1,000 diapers were provided in the Keys and nearly 39,000 to the island. The organization maintains the only diaper bank in the area and handles 840,000 diapers every year.

“The city of Boca Raton applauds the efforts of the JLBR, which has organized the only diaper bank in Palm Beach County,” Weinroth said. “Like many of our community nonprofit agencies, the JLBR identified a problem not being fully addressed by a government entity and stepped in to meet this need.”

For information about donations, call 620-2553 or visit www.jlbr.org/impact/community-diaper-bank.

The YMCA of South Palm Beach County surpassed its 2017 annual campaign goal of $510,000 and raised a record-setting $542,586, thanks to the support of more than 1,300 donors. Donations allow the YMCA to provide sports, education and training programs, as well as after-school and preschool.

“I am passionate about helping to raise funds for Alzheimer’s research,” said Candy Cohn, owner of Oasis Senior Advisors South Florida, whose team raised almost $2,000 for the cause. “I have many clients with Alzheimer’s, and my two aunts had it, as well. Alzheimer’s drastically changes the quality of people’s lives in a short period of time, and it’s imperative that we find a cure.”

For pashminas purchased either in-store or online, Evelyn & Arthur will donate 100 percent of the $28 price to selected charities each month this season. The December proceeds were to go to Little Smiles of Florida, a nonprofit that benefits children. In January, the color is pink, and proceeds will support Susan G. Komen’s Race for the Cure walks. Gift of Life Marrow Registry will be Evelyn & Arthur’s charity in February, and the pashmina color will be orange for National Cancer Prevention Month.

As part of its annual holiday food drive, the Realtors Association of the Palm Beaches and Greater Fort Lauderdale’s Young Professionals Network collected and donated more than 2,500 pounds of food to local food banks.

Lang Realty’s “Clean the Closet” clothing drive, which benefits Mary’s Closet at Women’s Circle, will run through January. The charity needs interview-appropriate apparel to help more than 350 women in Palm Beach County get jobs. To find a Lang Realty office to drop off donations, visit www.langrealty.com.