Braman Motorcars general manager Stephen Grossman ceremoniously gave Andrew Aiken, president and CEO of the Palm Beach Zoo & Conservation Society, a $25,000 check as part of a multiyear commitment to support the zoo’s tiger exhibit.
The money enabled the natural habitat for four Malayan tigers to nearly double in size and provided extra space for behind-the-scenes tiger housing.
“Their ongoing support of the health and wellness, education and daily operations [involving] the four Malayan tigers that call Palm Beach Zoo home is pivotal in helping us expand our role as Malayan tiger ambassadors,” Aiken said.
Said Grossman, “This partnership makes sense because both organizations are about relationships. For Braman, it’s between us, our customers and the community. For the Palm Beach Zoo, it’s between people, the animals and the community.”

Secretary of state lauds Young Singers
Young Singers of the Palm Beaches received a $1,000 Diversity and Inclusion Award from Florida Secretary of State Ken Detzner.
The award recognizes Florida-based arts organizations with initiatives that reflect inclusion. It is given by the Division of Cultural Affairs and Citizens for Florida Arts and made possible through funding from the National Endowment for the Arts.
Young Singers of the Palm Beaches CEO Beth Clark and managing director Melanee Blankstein accepted the award in Gainesville during the 2017 Convening Culture Conference. The money will go toward “Choir in the Glades,” an after-school program offered to elementary- and middle-school children in the Belle Glade area. 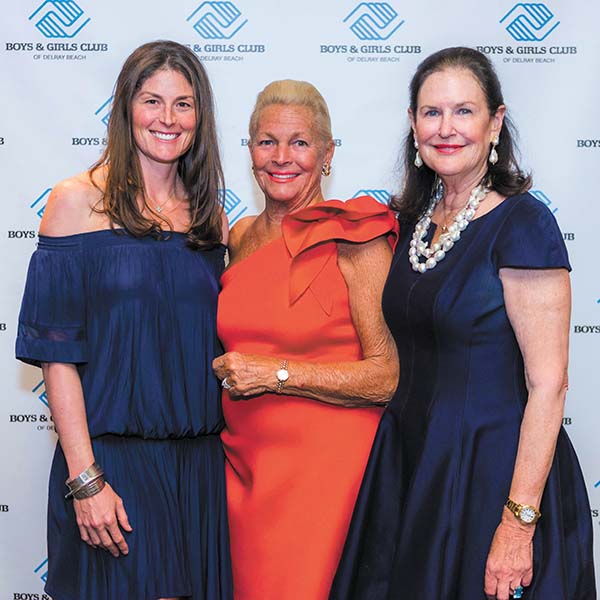 Nearly 250 were in attendance to support the Naoma Donnelley Haggin Boys & Girls Club at its Be Great Celebration Dinner on March 8. ABOVE: Event co-chairwomen Kirsten Stanley and Sue Ambrech flank honoree Muriel Losee-Pratt. BELOW: Former board member John Lynch also was honored.

New program provides free cribs, diapers, formula
Boca West Foundation, Boca Raton Regional Hospital and Sweet Dream Makers have kicked off an initiative that will help new mothers who need it most.
“Beginnings” guarantees that no baby will leave the hospital without a crib, diapers and formula. Boca West Foundation, via board member Neil Gillman and wife, Doris, has committed $20,000 toward the initiative. In addition, the foundation has made a $10,000 donation for the renovation of the maternity wing.
“This is going to be a transformational partnership in that we will be able to help so many families and especially the children,” said Sarah Pollak, director of development and donor relations at the hospital.
Added Suzanne Broad, founder of Sweet Dream Makers, whose mission is to promote the health and wellness of children and families by providing beds and other essential furniture, “A bed for every child is a dream come true, but thanks to the support of the Gillmans through the Boca West Foundation, it is now a reality.”

Boca Chamber celebrates DIAMOND Awards
The 11th annual DIAMOND Award Luncheon took place Feb. 24 at the Boca Raton Resort & Club and was attended by close to 300 who watched Susan Saturday and Rebecca Zerbo earn high honors.
The Greater Boca Raton Chamber of Commerce annually recognizes professional women in south county who contribute to the vibrancy of the community. A DIAMOND Award recipient is a dedicated, inspiring, accomplished, motivated, outstanding, noble and driven woman.
Saturday, of BBX Capital and Bluegreen Vacations, was the award recipient this year.
Zerbo, who founded the charitable organization Positive Pocket to empower, inspire and motivate people affected by bullying, received the Pearl Award. The award is given to a young female who is a graduate of the Chamber’s Young Entrepreneurs Academy.