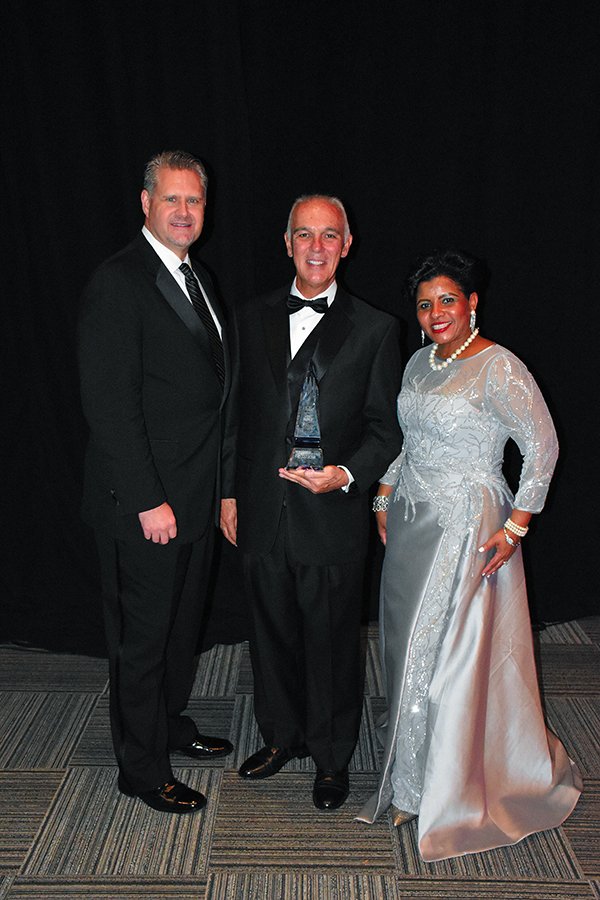 The Greater Boca Raton Chamber of Commerce celebrated its 65th annual grand gala with more than 250 professionals. They gathered for a ritzy evening that included a cocktail hour, dinner and dancing.

The Chamber recognized Ethel Isaacs Williams, who will serve a second term as chairwoman.

“Last year, we talked about moving forward with bold leadership, and under the leadership of Ethel, we did just that,” Chamber President and CEO Troy McLellan said. Also, Jerry Fedele, president and CEO of Boca Raton Regional Hospital, received the M.J. “Mike” Arts Award of Excellence.

“When we succeed, we succeed as a team,” Fedele said.

The annual Quantum in the Community initiative provides funds for operating costs in amounts up to $25,000 to qualifying charities that help meet the basic needs of the most vulnerable of residents. The grantees represent the four corners of the county, from Tequesta to Boca Raton and from Riviera Beach to Belle Glade.

“Health is our mission, but we realize that if people don’t have food, shelter or basic needs to start with, it’s impossible for them to lead healthy lives,” foundation President Eric Kelly said.

The fifth annual Hope Bash Boca brought the Cuban capital to life as guests enjoyed dinner, dancing and entertainment while raising funds for foster children and teens who have aged out of the state system.

Philanthropist Gary Peters was recognized with the Hero of Hope. Peters and his family foundation made the lead gift for Place of Hope’s current expansion at the Rinker Campus, which will provide eight two-bedroom apartments. The new units will allow youths in transition to have safe housing in western Boca Raton. Construction is underway.

Place of Hope is a faith-based organization that provides family-style foster care, maternity support, safety for victims of human trafficking and services for children traumatized by abuse and neglect.

Funders collaborate to help in wake of Hurricane Irma

When Hurricane Irma struck last year, area agencies stepped forward in a coordinated effort to assist Palm Beach County organizations that support the community. To date, more than $700,000 has been donated to 60 organizations providing everything from costs for roof repairs to professional mental-health counseling.

The funders include Allegany Franciscan Ministries, the Celia Lipton Farris and Victor W. Farris Foundation, the Children’s Services Council of Palm Beach County, the Community Foundation for Palm Beach and Martin Counties, the Lost Tree Village Charitable Foundation, the Quantum Foundation and the United Way of Palm Beach County. Their money enabled struggling residents to pay for food, housing and support services, even as some of the agencies were dealing with impacts from the storm. For example, the Caridad Center in Boynton Beach experienced an electrical outage that caused every toilet in its clinic to overflow. The center had to hire a cleaning service and remove and replace drywall. At one point, the center rented portable bathrooms so it could open for a few hours to give patients much-needed medications. Total cost: $19,000.

The funders continue to meet to discuss how to handle future emergency requests from nonprofits as the 2018 hurricane season approaches. 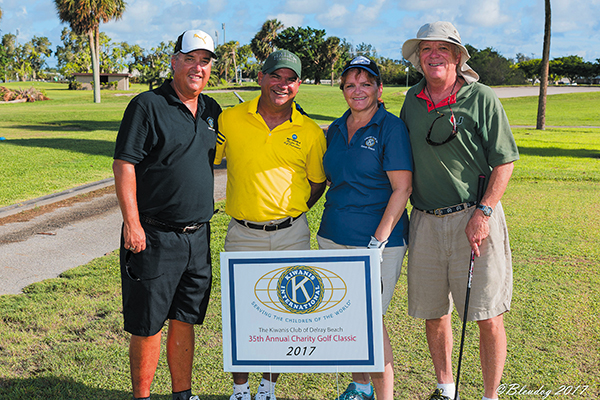 The Kiwanis Club of Delray Beach raised more than $3,000 during its annual Charity Golf Classic, with all proceeds going to support local children’s programs.

“This year’s tournament was one of the best, with a great turnout and lots of great prizes,” said Scott Youngberg, chairman of the tournament committee.

The event drew 36 golfers, with the foursome of Reeve Bright, Don Callo, Jack Foley and Peggy Kelleher turning in the best score. It served as a fun way to raise money for a good cause.

“The money we raised helps us provide scholarships, support Key Clubs at local high schools and has helped us establish a Reading Oasis at Orchard View Elementary School,” said Kelleher, the club president.