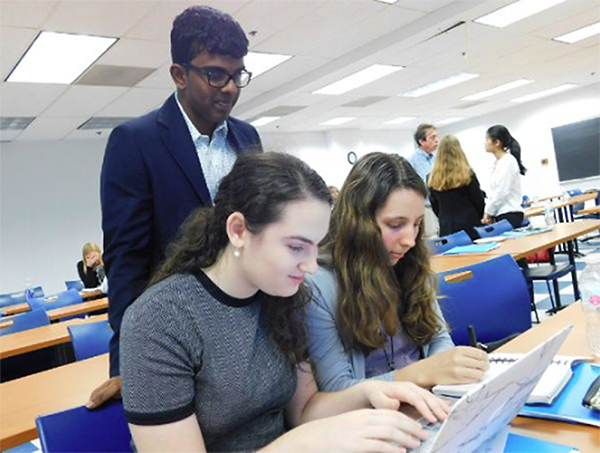 Songwriter Linda Creed is hardly alone in believing “the children are our future.”
In 2016, a group of local philanthropists led by Bill Meyer, chairman of Meyer Jabara Hotels, a hotel and restaurant management company with an office in West Palm Beach, started the Palm Beach Philanthropy Tank, a project of Advisors for Philanthropic Impact.
API, formed in 2011, brought together local real estate and trust attorneys, financial advisers, CPAs, insurance professionals and nonprofit executives in a “network of good.” One of its tenets is to “inspire a new generation of philanthropic leaders,” and the Philanthropy Tank takes that idea from intent to action.
Meyer started the Philanthropy Tank with an idea stolen from television and $25,000 he was willing to risk. “No one is giving young people the opportunity to take on community projects,” Meyer said, and he believed kids’ outside-the-box thinking might have an advantage over adult thinking. It did.
In 2016 and 2017, the PBPT funded projects that fought hunger in Delray Beach, taught life-saving CPR to high school students, screened the eyesight of Head Start kids, and built boundary-less play areas and gardens for kids in wheelchairs. Gifts ranged from $7,500 to $18,000 per project.
Every finalist gets something.
In 2016, the first year, nine groups split a total of $109,000 in gifts. The awards ranged from $7,500 to $18,000. In 2017, nine winning groups split a total of $100,000, with awards from $8,500 to $15,000.
This year, PBPT chose seven finalists among 47 submissions and got the community involved in picking another by asking people to vote for their favorite from a list of 10. The community voted for Hurricane Helping Hands, developed by Zoe Deitelbaum of South Palm Beach, Brianna Detamore of Boca Raton, Kiah Kimpton of Delray Beach and Naven Parthasathy of Boynton Beach, all students at American Heritage School in Delray Beach. Their project plans to provide hurricane emergency kits to low-income older adults to keep them safe during a hurricane.

Everyone pitches in
The group is an eclectic democracy, with each person holding a role. Brianna is the project manager. She sees the big picture. Zoe calls her “the delegator.” Kiah is the artistic one: “She did our logo, and she prepared our slide show.” Naven is the math guy, so “he handles the budget, and he’s also our presenter.”
Zoe, whose mother, Lisa Deitelbaum, lives in coastal Boca Raton, is the detail person. “I do a lot of different things, whatever is necessary. I do the research. I have some artistic skills,” Zoe said. She keeps things from falling through the cracks. Whenever teammates need help, it’s Zoe they call.
Being part of the community contest “was thrilling,” Zoe said. “We were up against kids from bigger schools and we worked really hard to get people to vote.”
The impetus for the survival kit idea came from experience, Zoe said. She and her teammates all suffered, to varying degrees, after Hurricane Irma last September.
“Everybody in the group saw it firsthand,” Zoe said. Friends were without power for days, the school was shut for more than a week, and it took more than a month for Zoe’s internet to be fixed. But what really stuck with Zoe and her friends? How older adults suffered.
“Seniors are forgotten people,” Zoe said. During the hurricane, Zoe’s beloved grandfather, Lee Goldstein, already fighting cancer, got sick and couldn’t get immediate access to treatment or the medication he needed. Well known in Palm Beach, Goldstein died in October, but not without teaching Zoe a few things about life.
“I was really close to him,” Zoe said. 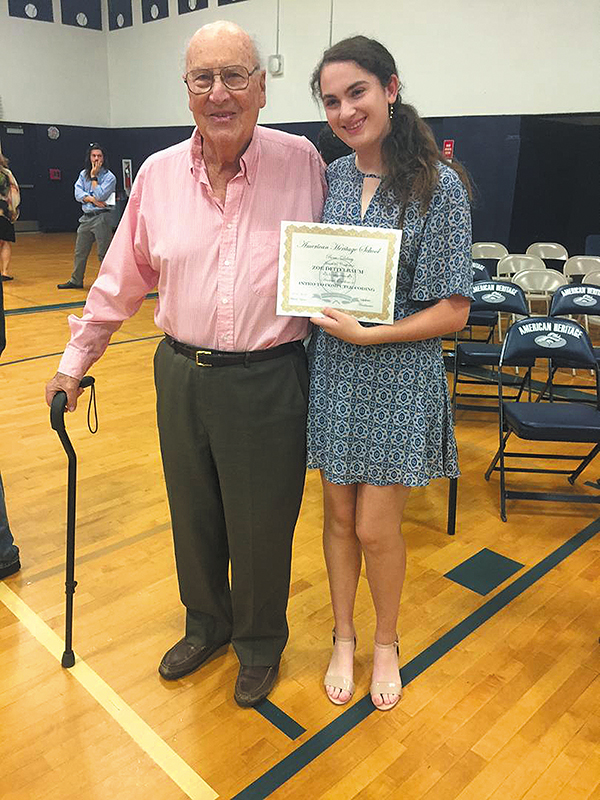 An inspiring role model
Goldstein, 80, actually taught many people a few things. As the founder and president of Virginia Design Packaging Corp. and a member of the Society of the Plastic Industry, Goldstein helped create and implement the recycling symbols used on the bottoms of plastic containers around the world.
He was a conservationist who served as a commissioner on the town’s Shore Protection Board, and he was former chairman of the Citizens’ Association of Palm Beach, which united co-op and condo owners to work together for the good of the community. He supported science through the South Florida Science Center and Aquarium and fought crime with Palm Beach Crime Watch.
Goldstein’s death, combined with the news of the deaths of elderly residents at nursing homes after Irma hit, illustrated the special vulnerability of older adults during a crisis.
Zoe and her team knew they could help.
Hurricane Helping Hands plans to deliver safety kits at the beginning of each hurricane season to low-income seniors in Palm Beach County. Each kit will include a flashlight, a crank radio, a three-day supply of nonperishable food, a can opener, water, a first aid/hygiene kit and a survival guide with emergency information on shelter locations, packaged in a waterproof container.
Zoe said the group researched what people buy for supplies, what experts recommend and the cost of putting together a kit, which reinforced the need for it. The students knew that lots of older adults just don’t have the extra money, no matter how badly they need the supplies.
Working with the United Way, the group identified a pocket of about 800 people living within walking distance of the school as the target recipients. Zoe’s team wants to recruit student volunteers to do the heavy lifting and deliver the kits in time for the 2018 hurricane season, which begins June 1. The group members plan to ask for about $14,000 when they make their final pitch on March 11.

Presentation prep
For about a month before the final presentation, groups chosen for the Tank attend weekend workshops in preparation for their presentations. Public speaking, Bill Meyer says, isn’t easy, but it’s an important skill, so much of the coaching focuses on it.
The group chose Naven as its spokesperson, so he’ll do the presentation. The free ceremony at the Dreyfoos School of the Arts in West Palm Beach is open to the public.
Zoe said working with her teammates, who are all active in the Future Business Leaders of America, was fun. All have strong leadership skills but they’re also willing to defer to each other as needed. Not only do they understand the concept of emotional intelligence, they possess emotional intelligence.
Zoe had already distinguished herself in a variety of forums before competing in the PBPT. In 2013, she earned a fourth-place medal for her project in the biochemistry category at the Palm Beach Regional Science and Engineering Fair.
For another project, Zoe created a website for The Imagination Emporium, coding the site herself using HTML5, CSS and Javascript, and although she enjoyed the challenge, coding is a hobby, not a career goal. But it certainly doesn’t hurt to have the knowledge and skills, and that’s what Zoe is doing: acquiring skills and gaining experiences.
The finalists’ ideas were evaluated for community impact, feasibility, solution creativity, sustainability and team strengths.
The PBPT wanted forward- thinking, novel solutions, so indirect or passive solutions like fundraisers for charitable gifts, or money for operating funds and capital campaigns were given less weight.
“The kids have done a terrific job taking this from idea to execution,” Meyer said. “We coach these kids in how to make their presentations, and that mentoring is invaluable to them. If they’re selected, they get 12 months of mentoring to help them solve difficulties along the route, and there are always difficulties.”
The students learn leadership skills, negotiating and sometimes just cold hard facts. In fact, the hardest part might be keeping the kids grounded, but the mentors have to do it without discouraging them.
“You want them to be successful, but sometimes what they’ve suggested seems impossible. But you don’t want to discourage them. Kids don’t see the world the way adults do,” Meyer said. “They don’t come in with negative perceptions.”
Meyer and the mentors call the students Positively Disruptive Change-makers.
Meyer has a rule he uses when he’s talking to them: “If it’s hard to choose what to say, you go with the truth.”
Another good lesson for tomorrow’s leaders.