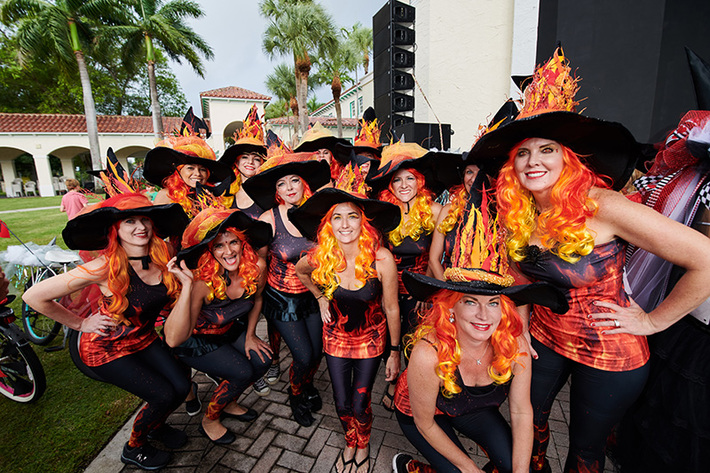 The Witches of Delray have been riding since 2012 and raise money for the Achievement Centers for Children & Families while having a lot of fun along the way. Photo provided

Imagine a peloton of 300 riders making their way down Delray Beach’s main drag, cackling as they are pedaling because they are decked out as witches.
Hippie-chick witches. Lilly Pulitzer witches. Sea witches. Tiki witches. Witch doctors.
The wacky scene at first confuses onlookers and then leaves them wide-eyed in broomstick, errr bicycle, dust.
“They looked at me like I was a crazy lady,” said Andie DeVoe, who helped found The Witches of Delray in 2012 and was one of the Halloween-themed fundraiser’s 11 original riders. “They just stand and watch — they can’t help but watch — and then they cheer. It’s like a two-part reaction — surprise and joy.”
The event typically attracts 300 participants who put on curiously clever costumes, decorate their two-wheelers and join the festive parade of sorts on Atlantic Avenue.
“It’s so cool,” DeVoe said. “It’s so fun. It’s so creative. My favorite part of it is the day of the ride, when they’re showing up and looking at each other’s bikes.”
The 3-mile route continues on A1A south to Casuarina Road then north to Gleason Street. A pit stop takes place in the Sandoway Discovery Center parking lot. The ride ends at Old School Square, but the party does not. Awards are given for best costume, best decorated bike and best group theme.
Riders each pay a $30 entry fee, and more money is raised through donations and sponsorships. The proceeds benefit the Achievement Centers for Children & Families, which serves under-resourced people through early-learning, after-school and teen-mentoring programs.
“It’s a beautiful partnership,” DeVoe said. “I saw the money raised go directly back into the community.”
The ride is Oct. 30, but the fun begins Oct. 22 with the Witches Brew at Tim Finnegans Irish Pub. The happy-hour party features a silent auction, tarot-card readers and games.
“We pack that place,” DeVoe said, noting that attendees don their more-elegant witch attire for the evening affair. “We just love dressing up.”
She said the Witches of Delray anticipates topping the $16,000 grossed in 2019.
“It’s been amazing to watch it grow,” DeVoe said. “It’s been amazing to see how much it is loved by the community.”