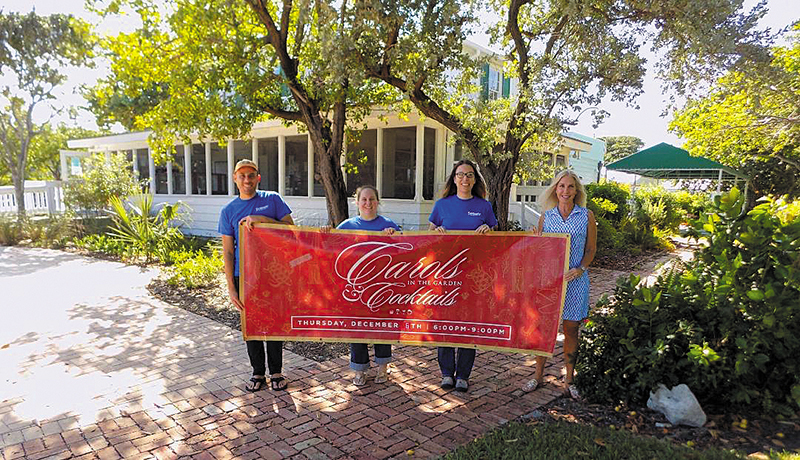 Guests at Sandoway Discovery Center’s Carols & Cocktails in the Garden can expect a sea of white lights on the front patio, an abundance of holiday decorations inside and live music with which to enjoy food and drinks.

The Dec. 6 event will raise money for the nonprofit, whose mission entails spreading the message of coastal conservation and educating children about it.

Tickets are $40 for members and $45 for nonmembers for the three-hour affair that includes a pop-up shop by Delray Beach’s Coco & Co. The goal is to bring in $5,000. An estimated 120 are expected to attend.

“It’s mostly an awareness event to get people to come out to see the Sandoway,” Barrette said.

“We show the center off,” Orellana said. “It’s a fundraiser, but we’re also looking for the community to become more of a steward of the environment.”

The center is a historically significant piece of property that dates to 1936 and is noted for its New England-style clapboard construction. In 1995, it was saved from demolition and renovated by the center’s Friends group as a beachfront home-turned-nature museum. Students visit the site to learn about marine life and habitat.

“We teach them about marine science, marine conservation, marine biology, ecology — just everything about nature,” said Orellana, noting that most of the students come from Title I schools. “This is one of their first exposures to nature, to sharks, to animals that they only read about in books or see at the movies. They’re just amazed. Their mouths are open. They’re just shocked that these animals exist and are alive.”

The center’s mission also entails educating children about climate change and, to that end, Sandoway received a three-year, $62,000 grant from the Community Foundation for Palm Beach and Martin Counties to create a class called Our Changing Earth.

“We are so excited to be able to bring environmental education to the children that need it the most,” said Danica Sanborn, the center’s executive director.  “We hope to inspire the next generation to conserve and protect our natural resources.”

What: Carols & Cocktails in the Garden