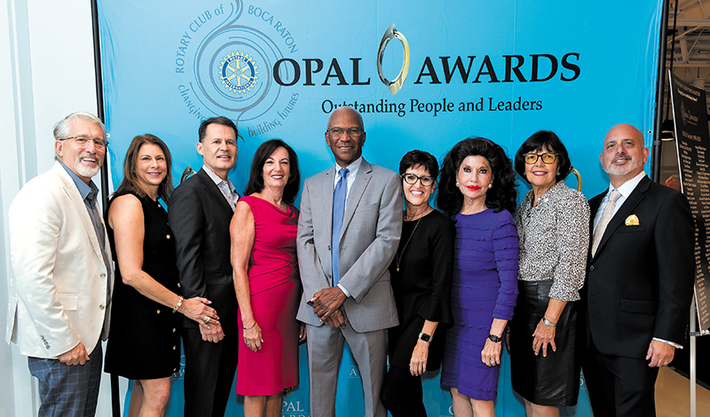 Whether a billionaire philanthropist or a public-school teacher, any recipient of the Rotary Club of Boca Raton’s Outstanding People and Leaders award exemplifies “service above self.”
The club’s motto not only has inspired its 80-plus members to come together and make the city a better place to live, work and play, but also forms the basis for honoring the citizenry.
“We honor people in the community who are the ones who make Boca Raton, Boca Raton,” Co-Chairman Neil Saffer said of the annual OPAL awards. “The presentation itself: We try to make it as Grammy Award-ish as possible, with giant LED screens, to give these honorees their finest hour.”
The major fundraiser will take place Jan. 14 at Boca West Country Club. Festivities include a cocktail reception, a seated dinner, a high-end auction and an uplifting program complete with videos celebrating the lives and achievements of the 2023 honorees.
“The food, drink and entertainment are always as good as it gets,” Saffer said. “Everything about it is first-class.”
Honorees are community leader Terry Fedele, Boca Helping Hands Executive Director Greg Hazle, philanthropists Mike and Amy Kazma and theater impresario Marilynn Wick. Rotarian Pia Giannone also will receive an award.
Proceeds will benefit one of the club’s most important missions: to fund scholarships at FAU and Palm Beach State College for students in both academics and trades.
“It’s wherever we can make a difference, whether someone wants to be a plumber or someone wants to get a college degree,” Saffer said. “We have helped hundreds of students whose parents are happy, proud and grateful.
“It’s a wonderful event, and it’s dual-purpose,” he said. “Those we honor support missions like ours and often become advocates for missions like ours. Some even guide our students if not hire them.”