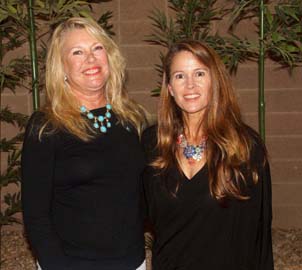 Just how funny is a Laugh with the Library charity event benefiting the Delray Beach Public Library?
One audience member banged his head on the table. Another spit out his drink all over a friend. And at the end of a night of comedy, some folks were holding their jaws, after laughing so long and so hard.
As co-chairs of the event for the past seven years, Heidi Sargeant of Delray Beach and Becky Walsh of Gulf Stream have seen it all.
And sometimes they are part of the jokes flying around the comedy club they create at the Delray Beach Marriott.
“You say, ‘Wait a second, did they just insult me?’ ”  Sargeant says with a laugh.
It’s all part of the fun of the night, with the proceeds benefiting the children and teen programs at the Delray Beach Public Library.
“We wanted it to be a night of fun. The ticket price is $150, everything included. Sit back have fun, no pressure,” Sargeant says.
Audience members can wear what they want.
All the fancy black-tie clothes can be left at home.
“You can wear jeans,” Walsh says. “The husbands love it because they don’t have to dress up.”
Listening to Sargeant and Walsh talk about Laugh with the Library is like watching a comedy duo perform: They finish each other sentences and laugh at each other’s jokes.
“It’s all the years of doing this together,” Walsh says.
Sargeant adds, “We are very hands-on. We do everything from putting the event together to putting stamps on the envelopes.”
Comedians who have performed at Laugh with the Library over the years include Bobby Collins, who performed for two years in a row, Dom Irrera, Rocky LaPorte, Eddie Brill and Sebastian Maniscalco.
Walsh recommended Bobby Collins for the first Laugh with the Library event after seeing him perform in New Hampshire.  And it was during Collins’ second year of performing at Laugh with the Library that the night of comedy just wouldn’t end.
“The second year that Bobby performed, no one wanted to leave the room. The buzz in the room was so great. People just lingered and Bobby was holding court and people were just listening. It continued on to the hotel bar,” Sargeant remembers.
This year’s comedian is Tom Cotter, the first comedian to reach the finals of America’s Got Talent.
Walsh and Sargeant saw Cotter perform early on in the America’s Got Talent competition and reached out to him. Cotter has a high-energy, rapid-fire style of comedy.
“We try to find comedians on the rise. And we just thought this guy is so talented … we ought to take a chance on him,” Sargeant says.
West Palm Beach news anchor Suzanne Boyd of CBS 12 will emcee this year’s  event, which will be held at the Delray Beach Marriott on Feb. 1. Last year’s Laugh with the Library show raised more than $40,000.
Sargeant and Walsh both love books and reading and contributing to the children and teen programs at the Delray Beach Public Library. They both also serve as board members for the library.
“It only takes one book to unlock a love of reading,” Sargeant says. If You Go
What: Laugh with the Library: Chapter Seven, a night of comedy, cocktails and supper by the bite, benefiting children and teen programs at the Delray Beach Public Library
Where: Delray Beach Marriott
When: Friday, Feb. 1
Performer: Tom Cotter
Tickets: $150
For more information: Call 266-0775
To register online: Visit www.delraylibrary.org.