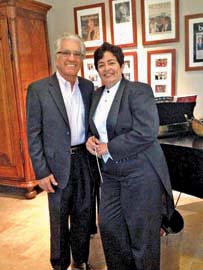 If it weren’t for a last-minute birthday present from his friend Claudia Willis, chances are Joseph Griffin probably wouldn’t have discovered the South Florida Symphony Orchestra.
Willis, knowing that Griffin was a lover of classical music, was running out of ideas for a present when she remembered she had two tickets to the orchestra’s January performance at Delray Beach’s Crest Theatre that she couldn’t use.
For Griffin, who makes his home in Highland Beach and Mary Lou Schillinger of Ocean Ridge, his close friend, that performance was a real eye-opener.
“I was so impressed with this little orchestra of 70 musicians,” he said. “The sound was just magnificent.”
Now Griffin is showing his support for the orchestra through a $10,000 challenge grant, which he hopes will lead to the Fort Lauderdale-based nonprofit’s raising an additional $20,000.
That money, he says, would go a long way toward covering the cost of the upcoming concert and helping ensure the orchestra — which is performing on April 9 at the Delray Beach Center for the Art’s Crest Theater — will be able to return to Palm Beach County next season.
“These are world-class musicians who come from all over the country,” he said. “Once you hear them, you’ll be blown away by the quality of their music.”
Griffin, who spends part of the year in South Florida and part of the year in Manhattan, says he’s long been a fan of classical music, having had a subscription to the New York Philharmonic for many years.
The April 9 master concert performance, “From Darkness Comes Light,” is expected to be equally impressive, with renowned cellist Zuill Bailey as the featured soloist.
Led by award-winning conductor Sebrina María Alfonso, the orchestra will perform works of Elgar, Brahms and Schubert.
“Having a symphony of this caliber performing in Delray Beach is a real coup,” said Willis, who has been a supporter of the orchestra for several years and who won’t be giving away her tickets this
time.
To find out more about the concert, visit www.southfloridasymphony.org or call (954) 522-8445.