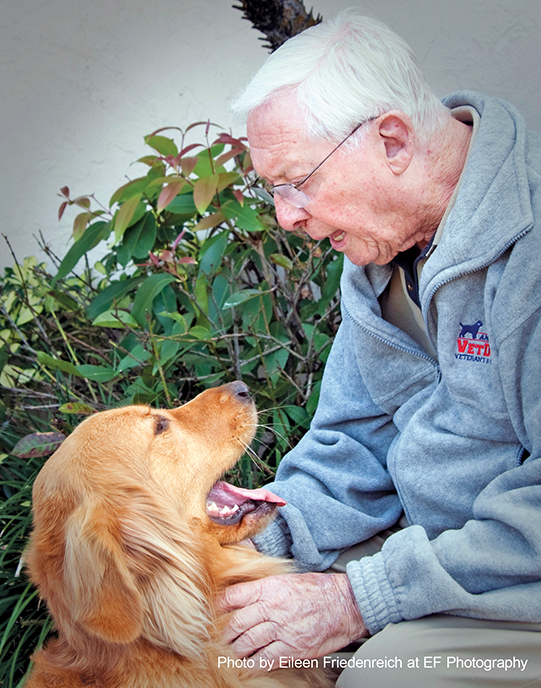 Meet Irwin Stovroff, an energetic 93-year-old from Boca Raton. He regards himself as “the luckiest person there is.” Let’s add remarkable and inspiring.
This decorated World War II fighter pilot and ex-POW built a successful furniture business career and is now known as the guy who gets things done for military veterans. When he retired at 75, he quickly discovered that the leisure life of playing cards, golf or tennis just wasn’t for him.
Instead, he launched his second career — assisting veterans with their pension and medical-care paperwork and, for the past six years, overseeing an organization called Vets Helping Heroes.
This nonprofit group raises money to sponsor the training of assistance dogs for military veterans and active-duty military personnel contending with physical disabilities and post-traumatic stress disorder. Since 2008, his group has raised more than $6 million and trained more than 200 dogs that fall into six categories of assistance to veterans: guide dogs for the blind; hearing dogs; service dogs for people with physical limitations; skilled companion dogs for people with cognitive disabilities; combat stress relief dogs; and facility therapy dogs who visit Veterans Affairs hospitals and hospices.
But let’s go back nearly 72 years ago — Aug. 13, 1944 — when Stovroff was a second lieutenant in the air force. On that date, he woke up before dawn and climbed into a B-52 bomber to fly behind enemy lines on what was to be his 35th and final mission. He got shot down over France and, being Jewish, quickly ditched his dog tags before being captured by the Nazis.
“I was one day from going home,” he recalls. “Everyone in our squadron had our bags packed to go home and we were envisioning parades. Instead, we ended up in a prison camp.”
He spent the next year as a POW, fighting fatigue and starvation before being freed by the Russians in May 1945. His 5-foot, 10-inch frame had shriveled to a mere 85 pounds by his first day of freedom.
Freedom. It is a word Stovroff doesn’t take lightly. It will be the centerpiece of his salute-worthy talk, aptly titled, “An Extraordinary Life Gone to the Dogs,” set for March 6 at the 10th annual Festival of the Arts Boca, held at the Cultural Arts Center.
“My message is simple: Freedom isn’t free,” says Stovroff. “Somebody has paid a price for it, and we are the beneficiaries. I will share my story and explain why I am what I am today.”
Stovroff tirelessly delivers talks and raises money and awareness for his cause: to help veterans enjoy enhanced lives thanks to being partnered with these talented dogs.
“For as long as I’m able, I will do everything I can to help these veterans and work to get them specially trained dogs who can help them live their lives to the fullest,” says Stovroff.
At a recent talk given in Sarasota, which helped raise more than $100,000 for Vets Helping Heroes, Stovroff was pleasantly surprised to discover who was in the audience.
“It was a gal named Louise who I had not seen since we were classmates at my grammar school in Buffalo, New York,” he said. “Can you imagine?”
Stovroff also champions the cause for the Southeastern Guide Dog Program.
“This is an outstanding organization that breeds and trains purebreds to be guide dogs and dogs for those with PTSD,” says Stovroff. “I promised them that for every dollar someone writes in, I would agree to double it. I gave them $120,000 — worth every penny.”
He shares his home with a pair of tail-wagging companions: Jenny, a 15-year-old corgi; and Cash, an 8-year-old golden retriever. Both earn their stripes in bringing joy to all they meet.
“Jenny is smart and she used to go with me to visit residents at senior citizen homes and hospitals, where she would greet everyone while wearing a specially made bomber jacket,” says Stovroff. “Cash is a service dog who is with me all the time. I am blessed to have both of them.”
Stovroff was awarded the Distinguished Flying Cross from Sen. John McCain in 2000, 56 years after his final flying mission. His life is also documented in a book authored by L.A. Weiser, An Extraordinary Life Gone to the Dogs.
“Yes, I do believe I am the luckiest person there is,” he states for a second time.
And, for the rest of us, we are lucky to have Irwin Stovroff around to help those in need.
To learn more about Stovroff as well as the Vets Helping Heroes organization, visit www.vetshelpingheroes.org.