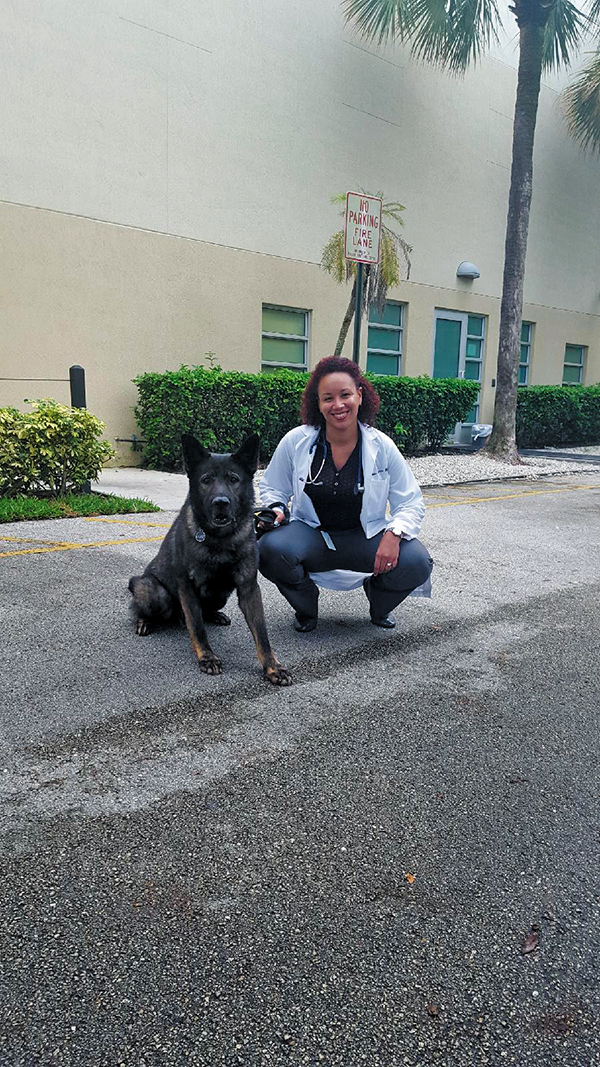 Sometimes, the dangers facing K-9 police dogs can be invisible but still very deadly. But thanks to a partnership between veterinarians and many police departments in South Florida, these working dogs stand a stronger chance of surviving the unexpected in the field. And, that makes police officers like Chris Schalk feel grateful.
Officer Schalk of the Boynton Beach Police Department works the night patrol with Iro, his 5-year-old German shepherd. Iro (appropriately rhyming with the word hero) is strong, quick and able to use his trained scenting skills to track down bad guys and even illegal stashes of currency.
But Iro and other police dogs can become ill — even die — if exposed to narcotics due to accidentally getting the substance on their paws or inhaling while working a case.
“Opiates have become not only a Florida problem, but a national problem,” says Schalk, an eight-year veteran on the Boynton Beach force who fulfilled his law enforcement dream earlier this year to become trained as a K-9 officer. “These working dogs are very valuable, and we want to make sure to take care of them. They are working hard to protect us and we should work as hard as we can to protect them from harm.”
Enter the veterinary team at Coral Springs Animal Hospital. Led by Melanie Thomas, DVM, and Bruce Sullivan, DVM, the hospital team is training and educating K-9 police officers in about 15 departments in Palm Beach, Broward and Miami-Dade counties.
“In the field if a K-9 dog gets exposed to opiates, every minute counts in saving his life,” says Thomas. “The sedative effects of these drops can impact a police dog’s respiratory system. Untreated, the dog’s heart and brain can stop.”
She and Sullivan train police on how to give antidote medications to their affected dogs in the field. Schalk now carries this lifesaving vial and syringe in his first-aid kit in his patrol car and knows now how to inject the antidote into the lower hip if Iro should be exposed to these opiates.
“Let’s say Iro, who is trained to track and sniff for money, bites a suspect in a pocket, penetrates that pocket with his teeth and we discover the pocket contains narcotics,” says Schalk. “Iro could become lethargic — not being able to stand up — and collapse. I am glad I know how to give him the antidote.”
As Thomas explains, “These police dogs have high drives and [are] motivated to learn.”
Some could have inadvertent exposure to narcotics through the skin, such as the paw pads, or ingest toxins nasally.
“A small cut on the paw or inhaling the narcotic can quickly enter it in the dog’s bloodstream,” she says. “The team may be far from a veterinary hospital. That’s why we felt it was important to train the officers on how to administer these medications in the field.”
In addition, the veterinarians are conducting training workshops to educate K-9 police officers on how to stop bleeding, provide basic wound care and address conditions like heat stroke in their dogs. These pet first-aid protocols help an officer stabilize his four-legged partner so he can transport him to a veterinary hospital for medical treatment.
“These dogs are trained to put their faces near things and some are trained to sniff for illicit substances,” says Thomas. “Cocaine in powder form can go up a dog’s nose quickly. We are ready to help these dogs when they arrive here, but we want to make sure the officers know what to do in the field as well.”
Schalk just completed a seminar on injury prevention and now has Iro go through some stretching exercises before they begin their patrols. He also has learned how to spot early signs of overheating so he can cool down Iro quickly and safely.
During his 10-year tenure in law enforcement, Schalk has done road patrol, been a police training officer and served on a SWAT team, but his No. 1 goal has always been to become a K-9 police officer. He got the chance in December 2016 and has partnered with Iro for the past several months.
“The training to be a K-9 officer is constant and ongoing — which I love,” he says. “And I love dogs. Being in the K-9 unit for me is everything I wanted. It’s in my heart and my blood. I love every bit of it and I am very grateful to have a great dog like Iro. He is very social and well-trained. He can go from tracking a bad guy to then letting people pet him. We make a good team.”
And thanks to the veterinarians at Coral Springs Animal Hospital, the team is even safer.

Safety tips at home
In your home, you can sidestep an array of medicine-related calamities by heeding these prevention tips:
• Don’t stash medicine for you or your pet on kitchen or bathroom counters. Dogs and cats can counter surf and reach these medications.
• Recognize that so-called childproof bottles are no match for the crushing jaws of a nosy dog or cat.
• Store medications in pet-safe places, including inside dresser drawers, nightstand drawers, kitchen cabinets or shelves in enclosed china cabinets.
• Teach your dog the “leave it” cue. In the event you accidentally drop one of your pills on the floor, this command could save your dog’s life. Be sure to reward his obedience for leaving the pill with a healthy pet treat.
• Use visual markers to help you easily distinguish medicine for you and medicine for your pet to avoid any mix-ups. Consider placing brightly colored duct tape (like neon orange) on the top of the bottles of medications for your pets.