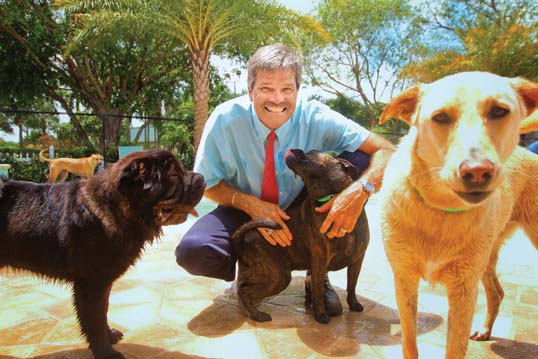 in the Doggie Day Care at the Barkeritaville Lagoon at Simmons Veterinary Hospital in Lake Worth.

a former patient of Dr. Ken Simmons, that died of bullet wounds after a burglary at its home.

When I first came to Palm Beach County to begin my career as a reporter for the Sun-Sentinel, one of my biggest moving challenges was finding the right veterinarian for my cats, Little Guy and Callie. That was 1987 — well before the Internet exploded with business websites, Facebook, phone apps and other social media venues.
Back then, one had to rely on word of mouth in finding a good veterinarian and other health professionals. I put my reporting skills to use, interviewing dozens of people in my neighborhood and in the newsroom who had cats and dogs. They shared unfiltered feedback on their veterinarians. In the end, the name that came popping up at the top was Ken Simmons, DVM, a veterinarian in Lake Worth. For the nine years that I lived in Lantana, he helped keep my feline twosome healthy.
At the time, he had a conventional practice with a lobby often filled with dogs, cats and other companion animals. He was a young veterinarian, just five years out of earning his degree from the University of Florida, but was already showing signs of being innovative, progressive and most of all, eager to help pets beyond exams and veterinary procedures.
Fast forward to today. Simmons is no longer my veterinarian, but that is strictly because of geography. I now share my home in San Diego County with two dogs, Chipper and Cleo (who surf!) and two cats, Zeki and Murphy. My foursome receive twice-a-year wellness examinations by the veterinary team at Melrose Animal Hospital. I learned decades ago from Simmons of the importance of such visits that can often help veterinarians detect and treat health conditions early, before they advance and before they become expensive.
In researching ideas for this pet column, I stumbled onto Simmons’ website. In addition to conventional veterinary care provided, his clinic also houses the Barkers Hotel, the Purrington Inn and the Bark Park playgrounds. He has evolved from being strictly a veterinarian to creating a one-stop place featuring pet activities and amenities. 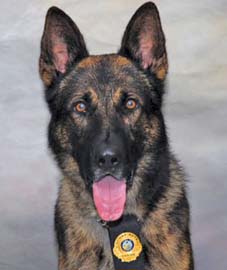 But what caught my attention is his efforts to not only memorialize one of his former canine patients, but to change the law to provide more medical benefits for police dogs throughout Florida. In late November, three people broke into the Greenacres home of Florida Highway Patrol Trooper Bobby Boody. He was not home, but his retired K9 patrol dog Drake was. Drake, a muscular, 80-pound German shepherd, was shot five times.
When he was brought to the Simmons Veterinary Hospital, Simmons went to work to try to save his life.
“There were two bullet holes in his head, he was shot two times in the neck and a fifth bullet shattered his left leg,” recalls Simmons. “We were able to stabilize him, but he had lost a lot of blood and I was concerned about a bullet that had hit his esophagus. There was also a mass in his abdomen about the size of a watermelon. So, I made arrangements to have Drake flown to the University of Florida in Gainesville where there was a team of surgeons waiting for his arrival.”
Sadly, Drake’s condition worsened and the decision was made to euthanize him the day after Thanksgiving. His death has motivated Simmons to champion the cause of police dogs, both active and retired. He is proposing the Police K9 Bill of Rights to Florida legislators that would provide lifetime medical benefits to these dogs, reclassify them as canine law enforcement officers — not equipment — and protect them with safety gear such as bulletproof vests.
In addition, Simmons hired artist Jocelyn Russell to create a life-sized bronze sculpture of Drake at his clinic’s Barkeritaville Dog Park. The base will inscribe the names, dates and departments of service dogs across the country killed in the line of duty or died of natural causes.
His hope is to unveil Drake’s statue at a special ceremony by Memorial Day.
“For 25 years, I’ve been putting the names of my patients who have passed on in memorial stones, but I felt compelled to do more for Drake,” says Simmons. “I remembered Drake when he was a healthy, strong police dog and that is the image that comes through in his bronze statute. He protected us and that is why I am pushing hard for a bill of rights for all police dogs. Together, we can do the right thing for these amazing dogs.”
To learn more about the Drake Memorial Project, visit www.simmonsvet.com.