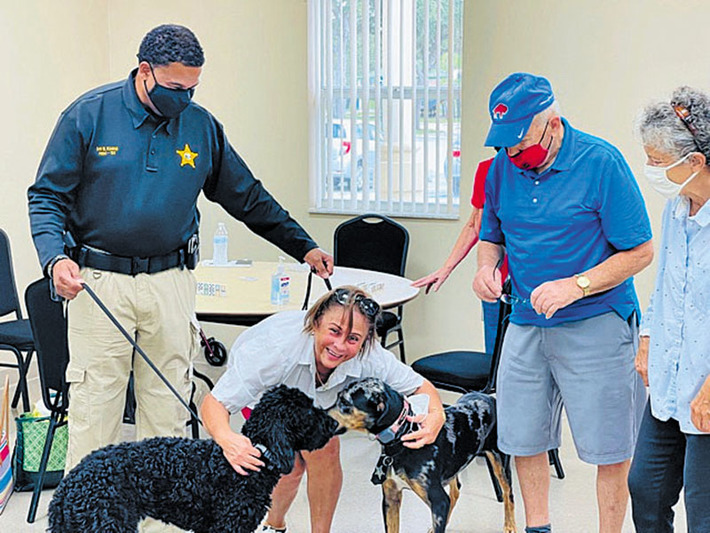 There’s a new type of K-9 police officer reporting for duty at the Palm Beach County Sheriff’s Office. These canine cops don’t chase bad guys. They don’t sniff out bombs or illegal drugs or crime scene evidence.
And they certainly don’t look like traditional police dogs. None of them are German shepherds or Belgian Malinois. These badge-wearing dogs love being greeted, petted and even hugged.
They are specially trained therapy dogs on a mission: To transform tears to smiles and fear to trust among people of all generations and circumstances.
And PBSO is fast becoming a showcase for the talents of these dogs, with four joining the ranks this summer and a few more expected this fall.
Some of the new therapy dogs attend community events, visit schools and perform other traditional therapy dog roles. Think of them as four-legged community cops.
Then there are Daya and Willow, who are partnered with Deputy William Feaman. Daya is a Catahoula leopard/hound mix with a name that fittingly means compassion in Sanskrit. Willow is a young black poodle mix. Their duties go behind showing up at community events.
“We all work the fluff stuff like reading to kids at libraries or ‘coffee with a cop’ events,” says Feaman. “But Daya, Willow and I are the only ones who respond to homicide calls, death notifications or when bad things happen.”
Their effort to reach out to people in trying situations is expanding the role police play in the community.
“Deputy Feaman is on the road every day listening to calls and showing up with his dogs at traffic crashes, fires, burglaries, sexual assaults involving children, and elderly community events,” says Teri Barbera, PBSO media relations director. Daya and Willow “add a new dimension to the force that is very much welcomed.”
For years, Feaman worked as an undercover narcotics cop. Then he learned about an emerging program that trains dogs to be therapy officers. He now reports for duty with his well-trained, well-mannered and highly intuitive doggy duo.
Both dogs came from animal rescue groups and were trained through a fast-growing police therapy program called Paws and Stripes from the Brevard County Sheriff’s Office. These dogs are sworn in after completing more than 400 hours of training.
Bringing two therapy cop dogs to a scene is proving doubly beneficial. Daya is the higher ranking therapy cop with more experience and weighs about 53 pounds. Younger Willow weighs about 33 pounds. One sheds — Daya. One is soft and fuzzy — Willow.
Feaman is able to size up the needs of people at crime scenes to determine which one of his four-legged partners will be better-suited to assist. And, during long work at a crime scene, he is able to give each dog time to rest and recharge.
“We read body language and when the tail stops wagging, I know it’s time to move them out to their safe space,” he says. “I thought it would be difficult to have two therapy dogs, but they work in sync together. They have never growled at each other. Daya acts like a big sister to Willow.”
They work emotionally trying cases. A sampling:
• A boy with autism ran into the woods after his electronic device malfunctioned. Feaman brought Daya to the scene. “The boy was very upset,” says Feaman. “I asked him, ‘Do you like dogs?’ He nodded yes. We stayed with him for about two hours and it was hot out there and the boy finally sat on the edge of the kennel with Daya, loving on her.”
• A 7-year-old girl threatened to commit suicide at a school and Feaman responded with Daya and Willow. “These dogs naturally help bring calm to people,” he says. “I view them as necessary distractions in trying situations. Science tells you that dogs lower blood pressure and release feel-good hormones when you pet them.”
• The trio arrived to a scene in which an 11-year-old boy was present when his father was killed. While the homicide officers worked the case, Daya and Willow provided canine love to the boy. “For two hours, these dogs became that boy’s dogs,” says Feaman. “He hugged them and talked to them.”
• When kids witnessed a neighbor kill another neighbor, Feaman was glad he had two dogs of different coats to comfort the kids. “The smaller kids felt more comfortable playing with Willow, while the older kids played with Daya. Willow looks like a fluffy teddy bear, so little kids naturally gravitate to her.
“Community policing is where my heart is,” says Feaman. “The bond we have is very strong.”
This new generation of police dogs arrives at a time when everyone of every age can use some canine kindness, says Lisa Radosta, DVM, a board-certified veterinary behaviorist who runs the Florida Veterinary Behavior Service in West Palm Beach.
“Neighborhood policing isn’t about being scary — it is about being a part of the group,” says Radosta. “Dogs make people happy. They soften them up. They start conversations. Dogs connect us and that is a good thing. We need to feel more comfortable with the police and be able to approach them. Having a dog there can only help with that.”

Here is a link to a short video that features the swearing-in ceremony of the K-9 therapy dogs at the Palm Beach Sheriff’s Office: https://www.youtube.com/watch?v=9bAFTkkBkB0