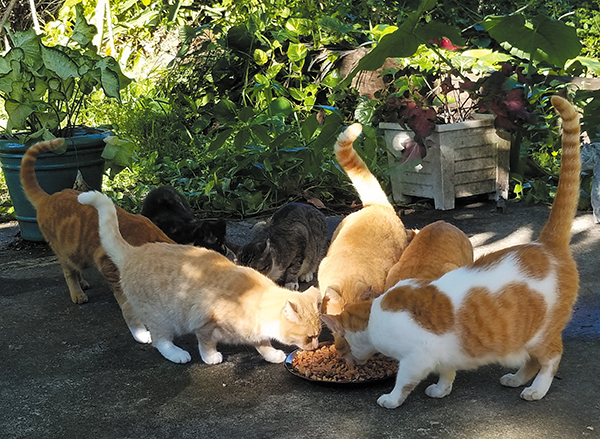 Hidden in the lush vegetation, perched on top of a mobile home roof or staying motionless under a parked car, about 20 cats silently wait for the appearance of their trusted caretaker, Brenda.
“Come on, babies, it is time to eat,” she calls out as she begins spilling kibble into large stainless steel bowls. On cue, the cats head for the first of two meals she will serve this day. They answer to such names as Freddy, RJ, Freckles, Can Do, Annie and Fuzzy.
As I look from a distance so as not to scare them away, I spot a fluffy gray cat hoisting a plumed tail. Then two muscular orange tabbies appear. A confident black-and-white cat steps from his hiding spot behind a tree. They all sport notched left ears to indicate that they have been spayed or neutered and received needed vaccinations. They appear healthy and content.
I am witnessing a successful community cat colony in operation at a mobile home park somewhere in Palm Beach County. I am not disclosing the location or Brenda’s last name at the request of my guide on this Tuesday morning, Paul Bates.
He oversees the Trap-Neuter-Vaccinate-Release program at Peggy Adams Animal Rescue League. He does not want people to dump unwanted cats into this colony and disrupt its harmonious balance or, worse, commit acts of animal abuse.
What can be disclosed is that this scene is happening in countless neighborhoods throughout the county and the country each and every day. In Palm Beach County, it is estimated that about 230,000 cats are living on the streets. Once branded as feral cats, these felines are now being identified as community cats.
“These are cats who live outside, who do not belong to anybody and who are not adoptable because they are not socialized with people,” says Bates. “And they certainly do not belong in animal shelters where they are often euthanized.
“Our job is to work with people like Brenda and ensure these community cats are neutered/spayed, vaccinated and returned to their outdoor homes.”
Bates first had to build trust with Brenda, a retiree living on a meager fixed income. She and her late husband, Joseph, have been lifelong cat lovers and she gladly takes on the feeding duties for her colony with food that is donated to her.
“These are my babies. I love them,” she tells me. “Some love to sit in my lap. If you are good to them, they are good to you. They make me smile and laugh.”
There are thousands of Brendas in every state feeding these homeless cats and working with agencies like Peggy Adams to catch them in humane traps so that they can be safely transported to shelters or veterinary clinics for medical care. Many are retirees who have a special fondness and dedication to these often forgotten cats.
Bates coordinates Project CatSnip with community cat colony programs in the county to ensure these cats are healthy and protected. He helped launch a Facebook group called Community Cats of the Palm Beaches to network with community cat advocates and to share information on how to care for these cats.
He is a man armed with education and a steady eye on statistics. Before the Trap-Neuter-Vaccinate-Release program launched in 2009, Palm Beach County shelters took in 19,000 homeless cats. That number fell to 10,000 cats in 2016. And, the number of cats euthanized in shelters dropped from 14,000 in 2008 to 2,300 in 2016.
“This has made a big difference, but it is still not acceptable,” he says. “In 2016, 6,654 community cats underwent TNVR and were returned to their colonies. In October 2017, Peggy Adams celebrated having completed 30,000 TNVR surgeries.”
Trapping and sterilizing these community cats is key. As Bates says, “Once 85 percent of cats in a community colony are spayed and neutered, the population stabilizes.”
He shares other insights into community cats:
• Community cats should not be relocated. Many risk injury or death from vehicles or predators in their determination to travel miles to return to their colonies. Attempts to completely remove a cat colony will only result in another cat colony moving in and producing far too many kittens. This is known as the Vacuum Effect.
• The best way to lure intact community cats into humane traps is to place these traps where they gather to eat and allow a few days for the cats to get used to them. Then create a trail of food leading into the traps and place the highest-quality food in the middle of them. To these cats, that food is usually sardines, tuna or, strangely, Kentucky Fried Chicken.
• Once cats in the colony have been spayed and neutered, incidents of nighttime yowling, fighting and urine marking by males looking to mate subsides.
• If you find a homeless cat with his left ear notched, do not bring him to a shelter unless he is injured or ill. This is the universal sign that he is a community cat who has been neutered.
• If you are feeding cats in your neighborhood, please contact Bates and the Peggy Adams staff so that they can assist in getting the cats vaccinated, dewormed, treated for fleas, spayed/neutered and ear-tipped plus microchipped for identification. And never leave food out as it will attract raccoons and other wildlife.
I ended my visit with this realization: Community cats in Palm Beach County are fortunate to have Bates as their crusader and people like Brenda as their unheralded advocates.
“We are making big strides in educating people about these cats, but we still have a lot of work to do,” Bates says, watching with admiration as a few cats rub against the legs of Brenda after their breakfast.

If you would like to volunteer, make donations or help community cats, contact Paul Bates at 472-8864 or email tnvr@peggyadams.org. To learn more about TNVR, visit the Peggy Adams Animal Rescue League at www.peggyadams.org/tnvr.